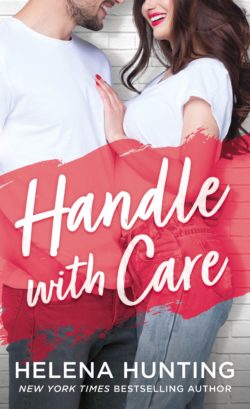 New York Times bestselling author of SHACKING UP and I FLIPPING LOVE YOU Helena Hunting mixes humor and heart in this scandal-filled romantic comedy.HE WANTS TO LOSE CONTROL.
Between his parents’ messed up marriage and his narcissistic younger brother, Lincoln Moorehead has spent the majority of his life avoiding his family. After the death of his father, Lincoln finds himself in the middle of the drama. To top it all off, he’s been named CEO of Moorehead Media, much to his brother’s chagrin. But Lincoln’s bad attitude softens when he meets the no-nonsense, gorgeous woman who has been given the task of transforming him from the gruff, wilderness guy to a suave businessmanSHE’S TRYING TO HOLD IT TOGETHER.
Wren Sterling has been working double time to keep the indiscretions at Moorehead Media at bay, so when she’s presented with a new contract, with new responsibilities and additional incentives, she agrees. Working with the reclusive oldest son of a ridiculously entitled family is worth the hassle if it means she’s that much closer to pursuing her own dreams. What Wren doesn’t expect is to find herself attracted to him, or for it to be mutual. And she certainly doesn’t expect to fall for Lincoln. But when a shocking new Moorehead scandal comes to light, she’s forced to choose between her own family and the broody, cynical CEO.

Wren has become one of my most favorite heroines!
I kept picturing her as a modern Nanny MacPhee and instead of toddlers and children she had to handle two adult brothers.

This was so unusual, incredible and funny!

Wren had been contracted to handle Armstrong. Armstrong was…a total immature douchebag!
He ran after everything sporting a skirt, never owned his mistakes and put real tantrum (also known as ADF emergency as in Armstrong Douche Fuckery emergency).

That’s really desperate when your damily has to contract someone to handle the adult you because you keep messing things so badly that  it would cost the family company a lot of money!

But fear not Super Wren will have him in a headlock faster than you can say sorry. I kid you not. A real headlock at the office.
It seemed that doing or threatening Armstrong with bodily harm was the only way to keep him contained!

« In accordance with clause six-nine-six, appendix D of my contract, I’m invoking the right to use self-defense in the event of unwarranted physical contact.” (…)

“We’re in the middle of reading your deceased father’s will. Have some decorum and stop acting like toddlers fighting over a damn cookie.” She releases Armstrong from the headlock and points a finger at my face. “Sit down, both of you. This isn’t a playground, and you’re not challenging each other to a thumb war behind the slide.”

The other brother Wren had to handle was Lincoln. He went from hot savage with a beard and man bun to spontaneous combusting panties unwilling CEO.

Wren had to threaten Lincoln with laser removal of facial hair for him to  begrudgingly accept cutting his hair, beard and wearing a suit!

Lincoln is forced by his grand mother to step up in his deceased father’s shoes for 6 Months the time to find a replacement.
Lincoln is not interested in working in that concrete jungle of New York. His jam is more of digging wells, building homes in poor countries.

But soon enough his verbal paring with Wren, riling her up every day  become the best part of his days!

This was a fun and light read. Low on angst and starred by an excellent character cast:

-the hot but with backbone of iron babysitter herm…handler;

-the extremely handsome and devoted to charity projects male hero;

-the totally immature and jerk of a brother;

-the modern business woman yet kind G-mom or grand mother;

-the evil queen because, of course you need one!

You will have some secrets, rampant sexual chemistry and … a lot of fun!