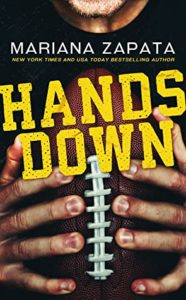 Before he was Big Texas, he was Zac the Snack Pack.Bianca Brannen knows time—mostly—heals all wounds. Including those your once loved ones might have unintentionally given you. (Those just take longer.)

I am a fan of Mariana Zapata. I loved The Wall, From Lukov with Love and Kulti.

This book has all the ingredients of her signature brand:

-an athlete here football player Zac (friend of Aiden for those who like me fell in love with the Wall of Winnipeg);

-a slow burn (of course or it would not be Mariana);

-friendly side characters to boost the story like CJ, Boogie, Connie etc.

So why didn’t it really work for me??

Let’s try to find the reasons.

Bianca has always been in love with Zac, her cousin’s best friend who took the little girl under his protective wing. Only …something happened and they didn’t see each other for ten years.

They were best friends and she tried to contact him for two years but Zac never answered.

She guessed his new life as a professional athlete, the girls etc. had him too busy to remember his childhood best friend’s cousin

But when she is forced to come to his rescue at her cousin’s request, he does not recognize her!

Of course, she would be hurt!

But once he realized who she was, he did all he could to cross her path again and again, determined to catch up with lost time

This story centers around a misunderstanding and it had Bianca all doubting herself. For years, she’s been insecure and it was hard for her to believe that Zac could be interested in her in any romantic capacity!

But where things turned wrong was that Bianca sort of  …wallowed in her inner thoughts? She was constantly trying not to bother Zac, not to inconvenience Zac, because of course Zac didn’t see her as a lover but as a sister etc. etc.

Some of these inner doubts is great, too much had us going in circle.

Zac was a loveable character but I would have loved knowing him better. In his own book here he seemed more like a side character. Lacking some depth. Yet I could see that he was a great and kind guy. He had humor and I loved him somehow. I just wished I could be more in his head or that he would have been more “fleshed out”.

What was also hard to believe in was the romance.

The friendship was amazing but Zac constantly calling her “kiddo” made her seem like his little sister rather than a potential love of his life. I know Mariana writes slow romance and I love her for that but still…

Now what was great here?

Well I really liked that Zac having doubts about his career Bianca was there to boost him!

It was obvious that they were perfect for each other and they had a good banter going on! Rather as friends as I mentioned but the banter had me snickering and smiling.

Both had insecurities and that made them real, human.

What I also found really endearing was getting a glimpse into my two favorite stories: From Lukov with Love and the Wall! That was like the cherry on top. These cameos had me all warm and fuzzy inside.

All in all, I liked it but I didn’t love it. I hope that the next book will make me fall back in mad love with Mariana.