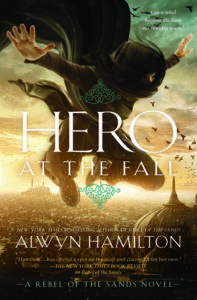 When gunslinging Amani Al’Hiza escaped her dead-end town, she never imagined she’d join a revolution, let alone lead one. But after the bloodthirsty Sultan of Miraji imprisoned the Rebel Prince Ahmed in the mythical city of Eremot, she doesn’t have a choice. Armed with only her revolver, her wits, and her untameable Demdji powers, Amani must rally her skeleton crew of rebels for a rescue mission through the unforgiving desert to a place that, according to maps, doesn’t exist. As she watches those she loves most lay their lives on the line against ghouls and enemy soldiers, Amani questions whether she can be the leader they need or if she is leading them all to their deaths.

This is the story legends are made of. Epic. Brilliant. Stunning conclusion to a riveting fantasy trilogy!

Why did I wait months before reading this one??????

I had been lucky to get the first two books via Netgalley. They were so smart and enthralling that I bought them in French for my kids who are now both addicted.

The third one has been pre-ordered months before its release but it was patiently waiting on my shelf as I was drowning in ARCs and new releases.

The incoming YALC London with Alwyn Hamilton attending this even t was the proverbial kick in my behind to push me into action.

I read it in two days (work just got in the way) flying into the book, going from one battle to the next, out of breath most of the time. I leapt from a big blue bird to the sandy ground, climbed mountains, crossed deserts on a ship. I balanced on a high rooftop spying on the Sultan. I tried to make deals with Djinni without being tricked. I had to make hard choice, know who would die, who would be sacrificed among friends and allies to save many.

When I shut the book it was with a pang of regret as I knew that I was leaving the Djinni’s and Demdji’s world for the last time.

Alwyn Hamilton has written an epic. There is no better word for this trilogy as according the Merriam Webster dictionary:

: a long poem that tells the story of a hero’s adventures

: a long book, movie, etc., that usually tells a story about exciting events or adventures

This book begins right after the rebellion has been decimated by the Sultan.

Ahmed, Shazad, Delila and many others have been captured.

Only Amani, Hala, Jin, the twins and a few others are left to decide a course of action in order to free Ahmed.

Amani will lead our small group but who is she compared with the Sultan? Even compared with Ahmed and Shazad who have been raised and groomed to become leaders?

“Here in front of me, the Sultan looked like what he honestly was: a ruler descended from hundreds of legendary rulers before him who had fought and clawed for that throne. And grabbed it. And then held it. He was the blood of Imtiyaz the Blessed; Mubin, the victor against the Red-Eyed Conqueror; Fihr, who built the city of Izman from the dust.

And I was just a discarded Djinni’s daughter from a dead-end desert town who was scraping tricks from the bottom of the barrel.”

Countless times in the book Amani will have to decide with her guts and the wisdom of the desert’s people.

She will make hard choices, renouncing seeming easy alliances preferring to do the “right thing” and save a friend.

“A whole army in exchange for the life of one boy who was a lot more trouble than he was worth. But he was my friend and our ally all the same.”

Amani went a long way from the rather selfish girl she was at the beginning of the trilogy. Saving Jin, saving Shazad, saving Sam, saving others along her journey. She had a tremendous personal development. I loved how Alwyn made her grow up. Discovering her powers. Putting the country’s need above her own. Ready to sacrifice her live for the greater good. It’s no wonder  the title of the book is “Hero at the Fall”!

By the end of her journey, Amani had changed so much. She had discovered her true self.

“Only I knew who I was. I was a Djinni’s daughter. I was a rebel. I was an advisor to a prince. I had faced down soldiers and Nightmares and Skinwalkers. I had fought and survived. (…) I had saved lives, and I had sacrificed lives. And I had done it in the name of saving people exactly like my aunt – the people of Dustwalk, who’d been turned bitter and angry and desperate by a country that didn’t care about them. I had done it for a prince who did care what happened to them.” 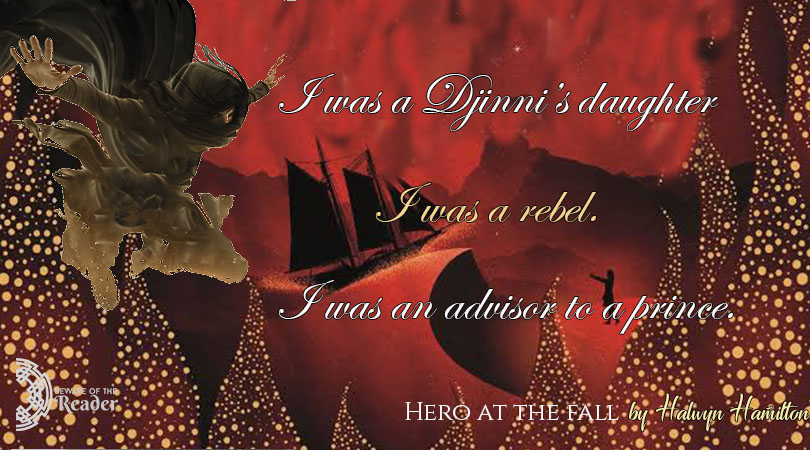 As you must have understood by now, not everyone will make it alive. Important characters will die. Tremendous sacrifices will be made. In the hope of a new dawn.

There was never a dull moment. The pace was thrilling, the story captivating filled with plot twists, new allies and betrayals. All characters were essentials to the plot, well fleshed out and each played a crucial role in fighting the war against the Sultan. Sam even added levity to the story with his perpetual banter. The love story did not overtake the plot, the action focused on winning a war and saving lives, creating a better future.

Recommend it? Hell yes certainly if you have read the first two books and if you haven’t already what are you waiting for???

Do you like stories with Djinns? Have you read this trilogy?