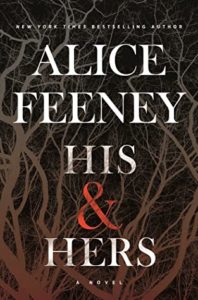 There are two sides to every story: yours and mine, ours and theirs, His & Hers. Which means someone is always lying.Anna Andrews finally has what she wants. Almost. She’s worked hard to become the main TV presenter of the BBC’s lunchtime news, putting work before friends, family, and her now ex-husband. So, when someone threatens to take her dream job away, she’ll do almost anything to keep it.

When asked to cover a murder in Blackdown―the sleepy countryside village where she grew up―Anna is reluctant to go. But when the victim turns out to be one of her childhood friends, she can’t leave. It soon becomes clear that Anna isn’t just covering the story, she’s at the heart of it.

DCI Jack Harper left London for a reason, but never thought he’d end up working in a place like Blackdown. When the body of a young woman is discovered, Jack decides not to tell anyone that he knew the victim, until he begins to realise he is a suspect in his own murder investigation.

One of them knows more than they are letting on. Someone isn’t telling the truth. Alternating between Anna’s and Jack’s points of view, His & Hers is a fast-paced, complex, and dark puzzle that will keep readers guessing until the very end.

This review will be short as I don’t want to give anything away!

It was a book club read on instagram that I should have waited till the end of the month to discuss but …I simply could not stop reading it!

Thrillers and mysteries is not my preferred genre so I might be biased as in “not experienced” in these kind of plots but Alice Feeney had me guessing until the last pages!

Or rather, I thought I had figured it out a first time, close to the end. And it seemed so.

But then, bam! No it was someone else “who did it”!

And when I was confident that now the mystery was solved and I had the “good” murderer, she turned my world on its axis again!

I was left batterd and bruised, knocked out cold!

This is twisted, crazy, tense, savage, creepy … a perfect read for the season.

This book is told from two POV.

When you begin reading, nor Anna nor Jack are really loveable.

Anna is a drunk and very ambitious but you can’t help pity her as she loses the position she so proudly occupied for two years now.

Pretty early on, you guess a drama happened that made her lose her world and she now is alone, hyper focused on her job as a news reporter.

Jack is her ex husband and a cop. At the head of the crime unit in a small village, you understand that he “shagged” women after divorcing his wife while now living with another woman and a baby…

Not something to admire right?

Old before his age because of the same drama that happened to Anna, cynical he also is in a bad position at the opening of the book because there is a murder in his small town and he could be a prime suspect.

When Anna comes to cover the news, things get complicated.

Alice Feeney had me believing that “he” or “she” did it depending on the chapter and the clues left behind. Back and forth my doubts volleyed back between these two.

They hide so many secrets. Some are really ugly and will be uncovered by the very end, shocking you as you never guessed what they were!

Both characters are flawed, bruised and will have to learn forgiveness and collaborate in the hope of finding that killer on the lose because he won’t stop at one victim!

As I said, I am not very experienced with this kind of reads and maybe I am too easily impressed with the writer but based on the high praises that book is getting, I’d say this is an outstanding crime/mystery/thriller book!

Perfect for my friend Alexandra or Lindsey!

Have your read it? Or any of her other books?