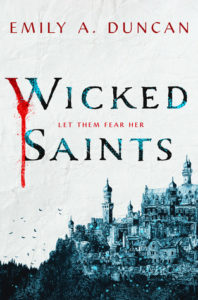 A girl who can speak to gods must save her people without destroying herself.A prince in danger must decide who to trust.A boy with a monstrous secret waits in the wings.

Together, they must assassinate the king and stop the war.

In a centuries-long war where beauty and brutality meet, their three paths entwine in a shadowy world of spilled blood and mysterious saints, where a forbidden romance threatens to tip the scales between dark and light. Wicked Saints is the thrilling start to Emily A. Duncan’s devastatingly Gothic Something Dark and Holy trilogy..

Sorry but this was so not what I expected!

I nearly DNF and franckly the beginning did not work with me at all! Maybe because I associated cleric with bigots?  Maybe because it did not seat well with me that Nadya had to do the gods will? Not one god but many many gods. She felt like a puppet to me. Yet she also had the gods doing her bidding..
I was lost, angry, annoyed and confused.

I had to go past the 35% to really fall into the story and feel concerned by Nadia’s fate.
Is it random that it’s around that point that the story stopped to focus only on the setting, on the events but moved to the feelings and the interaction between Nadya and her unexpected allies?
I think not.
Because I will always be a characters first kind of reader.

This was a turning point for me and took the story from 2 stars to 4,5 stars by the end.
And what a dramatic grand finale!

Emily A. Duncan has written a complex and dark gothic tale. Mixing saints, gods, blood magic on what I experienced as a Slavic background.

This story has a cleric hero, glowing light and only hope for people in dark time. Her faith will be tested countless time. Nadya will make prowesses but she will also pay a hard price.
It has war, magic battles, romance even if it is far from the focal point. It is filled with betrayals and unexpected character’s developments. Few villains are evil and many will surprise you.
It is rich, imaginative with its own set of monsters.
With so many shades of darkness and so many variations of light I was not surprised to read Emily thanking Queen Bardugo!

If you give it a chance go past the 35% mark before making up your mind.

I want to thank St Martin’s Press who granted my wish on Netgalley. It had no influence on my willing and always honest review!

Have you read something similar? Were you surprised by a book these last months?