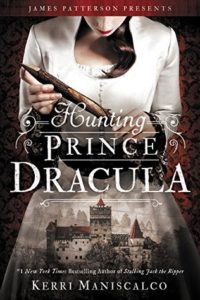 Following the grief and horror of her discovery of Jack the Ripper’s true identity, Audrey Rose Wadsworth has no choice but to flee London and its memories. Together with the arrogant yet charming Thomas Cresswell, she journeys to the dark heart of Romania, home to one of Europe’s best schools of forensic medicine… and to another notorious killer, Vlad the Impaler, whose thirst for blood became legend.But her life’s dream is soon tainted by blood-soaked discoveries in the halls of the school’s forbidding castle, and Audrey Rose is compelled to investigate the strangely familiar murders. What she finds brings all her terrifying fears to life once again.

In this New York Times bestselling sequel to Kerri Maniscalco’s haunting #1 debut Stalking Jack the Ripper, bizarre murders are discovered in the castle of Prince Vlad the Impaler, otherwise known as Dracula. Could it be a copycat killer…or has the depraved prince been brought back to life?

I have gobbled up Stalking Jack the Ripper like a cat would a bowl of cream. I had my new “series crush”.

On I went, right after, to Hunting Prince Dracula, decided to binge read/listen to that series.

If this book was good, it lacked a little something that I found in the first one.

Maybe it was the banter between Audrey Rose and Thomas that was quite absent for a long part in the book as Thomas’s actions had Audrey Rose showing him the cold shoulder? She went to investigate alone and …I missed mischievous Thomas! I think they work better in tandem, their banter being a big reason why this series has such success.

Maybe it’s also because some twists and explanations were quite hard to believe and nearly, convenient for the sake of the story? The motivation of our killer once known was hard to swallow as how could the killer know that her target to help reach the objective would be at the academy at that precise time?

Plus how would her target not be killed in that hunt who turned worthy of Indiana Jones at one point in the story?

These two points are the reason why this is a four to 4,5 stars and not a five stars.

Now four stars is certainly not a bad rating!

I had great pleasure listening to Audrey Rose pursuing her dream to work in forensic and studying in an elite academy in Romania. She had her usual inner fire and determination to show all these young men that a woman could be their equal!

Having a killer on the loose, busy recreating the Impaler’s actions and trying to elucidate that mystery, all while prowling in secret passages of a big castle was thrilling and had me reading as fast as I could!

Special mention again for the narrator, Nicola Barber, whose clipped English and sweet voice hiding a heart of steel when need be, was the perfect choice for narrating this series!

I plan on reading the third book in a few days and hope to get back my favorite tandem Thomas/Audrey Rose firing on all cylinders!