Alex Gardener has her life planned out, down to the smallest detail. She has a skyrocketing career as a litigation attorney, a close group of socialite friends, and is engaged to one of the most successful businessmen in Beverly Hills. Everything is just as she wants it: comfortable, predictable, secure…if lacking passion. Fire. Cory Bishop is a struggling working man, trying to make ends meet while fighting to keep custody his young daughter. He knows that working hard is the only way to achieve his goals, but lately it seems everything he wants hangs just out of reach.

The bank robbery changes everything.

Alex and Cory spend three harrowing days as hostages locked in a bank with fifty frightened people and six criminals who grow more desperate–and dangerous–by the hour. Alex and Cory find comfort and safety with each other and reveal their deepest hopes and fears and secrets, unknowingly building a bond forged out of desperation and fear, one that they can’t break, even once outside the bank’s walls.

Their lives are turned upside down, irrevocably altered, and they seek to move on and put the robbery–and each other–behind them.

But some bonds, once forged, cannot be broken.

Emma did it again!

She made me stomp on my triggers and beliefs! There are a few things that I can’t stand in books and they are big “no no” for me but here well, it was the exception to the rule and I won’t say more. That makes it twice in less than one year (remember the love triangle “thing” in The Beautiful Hearts duet?).

She made me fall in love with her story.

I realize once again that I am all over the place trying to write a review for one of Emma’s story! That’s because she makes me feel so many emotions that I am like a volcano ready to erupt and bleed words on the page as I have so much to tell.

Let’s try to be structured now because I want you to read it and if I hope to convince you well, I have to build a strong case just like Alex did in a courtroom!

The story is essentially character driven as the plot is “simple” even if the character’s dilemma and emotions are complicated.

Alex is the Shark Lady, litigation lawyer and one you hire even when you are a little bit shady because she is the best at what she does: winning her cases!

Fiery redhead, workaholic, she wants to make her retired lawyer of a father proud by winning her cases. She works so much that she lost herself somehow and when a nagging voice tells her that maybe her client is not totally innocent, she shuts that voice with “the law is the law”.

As Cory will later say yes of course there is the law but there also is ethic and doing what is morally right. 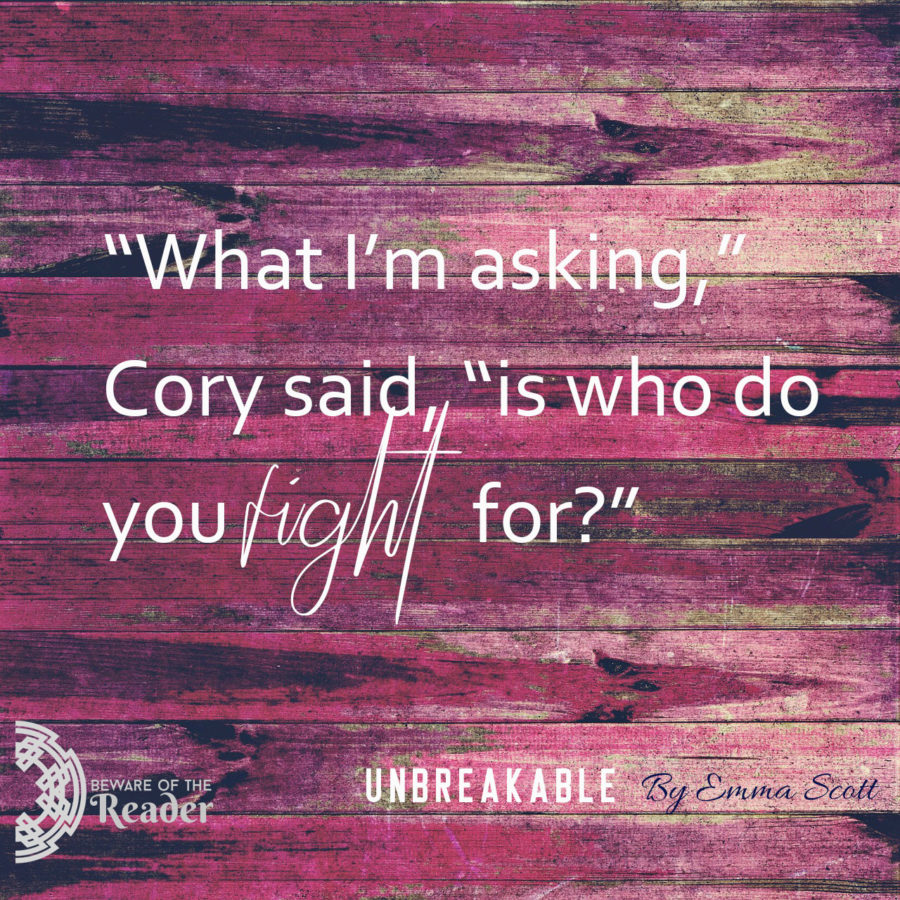 Alex has an equally work driven fiancé Drew, handsome, kind, wealthy, her best friend. All should be rosy in their world except that they are so focused on work that they don’t do anything else anymore. And Alex is missing some touch, some body warmth, some passion…

When Alex goes to the bank one day she will meet Cory in the queue.

You can immediately feel the attraction. They are like magnets but of course what would they do in a queue at the bank right? Talk and nothing more especially when Alex has a fiancé waiting for her at home.

That’s until the Monster gang attacks the bank and take every client hostage for days!

Emma wrote the tension and drama perfectly. The terror of being locked with other strangers in a small room with a crazy “trigger happy” junkie guarding your door. The lack of water, of food. Asking to go to the restroom while you fear that talking to your freak of a guard will have you raped or killed!

Hostages panicking, other snapping at each other…

And among them there is Cory.

Important question: where can I find Cory?

Seriously Emma why didn’t you tell me of Cory sooner??? We’ve known each other for some time now so don’t think I will let you out of the hook next time I’ll meet you! I bet you wanted to keep him all to yourself!

Joke aside now Cory is really a “one of a kind” hero.

If he was in a Fairytale he would be Prince Philip slaying the dragon to save Sleeping Beauty. Because that’s who Cory is: a protector.

He was the one calming everyone in the room with Alex’s help.

He was the one telling the criminals he did something that would get him killed just to protect another hostage.

He is the man who is taking the best care he can of his father suffering from Alzheimer.

He is the dad who is working long hours to care for his little daughter, even if her mother is a constant pain in the behind.

He will always think of others before himself.

He is a man who wants to live his life with integrity and do what’s good.

“But Pops once told me that a life without integrity wasn’t worth living”.

Now of course the sparks present while waiting in the queue will burst to life when Alex and Cory are in close quarter for days in a row.

From the beginning you feel that it’s more. More than lust.

It’s something primal, fundamental and right even if it’s wrong.

Just know that the “after” with dealing with PTSD syndrom was realistic. That Cory was really a beacon of strength to Alex.

You will have moral choices to make.

You will be angry with Alex. For her choices as well as her lack of choices. For what she’ll say as well as for her silence.

Yet Emma shed light on Alex’s inner battle and I could not help but like her and commiserate. Because at the end of the day that’s what we all are: flawed.

And we all try to do our best. Sometimes the best is the moral choice, sometimes to get there we need time and some push in the right direction.

I will conclude with this: Emma’s writing Is as beautiful as ever. I would love citing many more quotes but it would give the plot away and spoil your fun.

I know this is a “revamp” of a past story and I don’t know what has been changed. Maybe Callie dreaming of being a superhero and fly to feed the homeless? Because that reminded me so much of Izzy!

Revamped or not I only have two words left: read it!

Have you read it or are you a fan of Emma Scott?