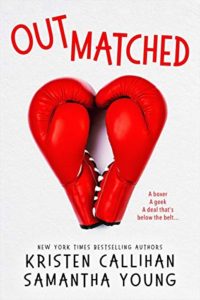 What happens when a boxer finds chemistry with a geek? Parker Brown can’t believe she needs to hire a fake boyfriend. When she landed her dream job in renewable energy, she thought she’d be entering a world at the forefront of progressive thinking. But the head boss prefers to promote employees who are “settled.” Thankfully, she’s found the perfect candidate, a fellow intellectual looking for some quick cash. What Parker gets is his protective big brother—Rhys Morgan. The tall, muscled ex-boxer with a foul mouth shows up just as her boss does, and now she’s stuck with the manipulative jerk.

Responsibility weighs heavily on Rhys. Now permanently out of the ring, he’s trying to hold together his late father’s gym and keep his younger brother, Dean, on the straight and narrow. To save Dean from himself, Rhys takes his place, ready to give this society girl a piece of his mind. Instead, he finds an opportunity. Even though they can hardly stand each other, posing as Parker’s boyfriend is a win-win deal. She gets to keep her job, and he’ll charm her star-struck boss into sponsoring his gym.

Problem is, they can barely keep their hands off each other. And what started as an easy deal isn’t so easy anymore. Because what future can a rough ex-boxer, afraid to open his heart, and a polished society geek, who has sworn off real relationships, possibly have?

They say opposites attract. These opposites are about to combust on impact. 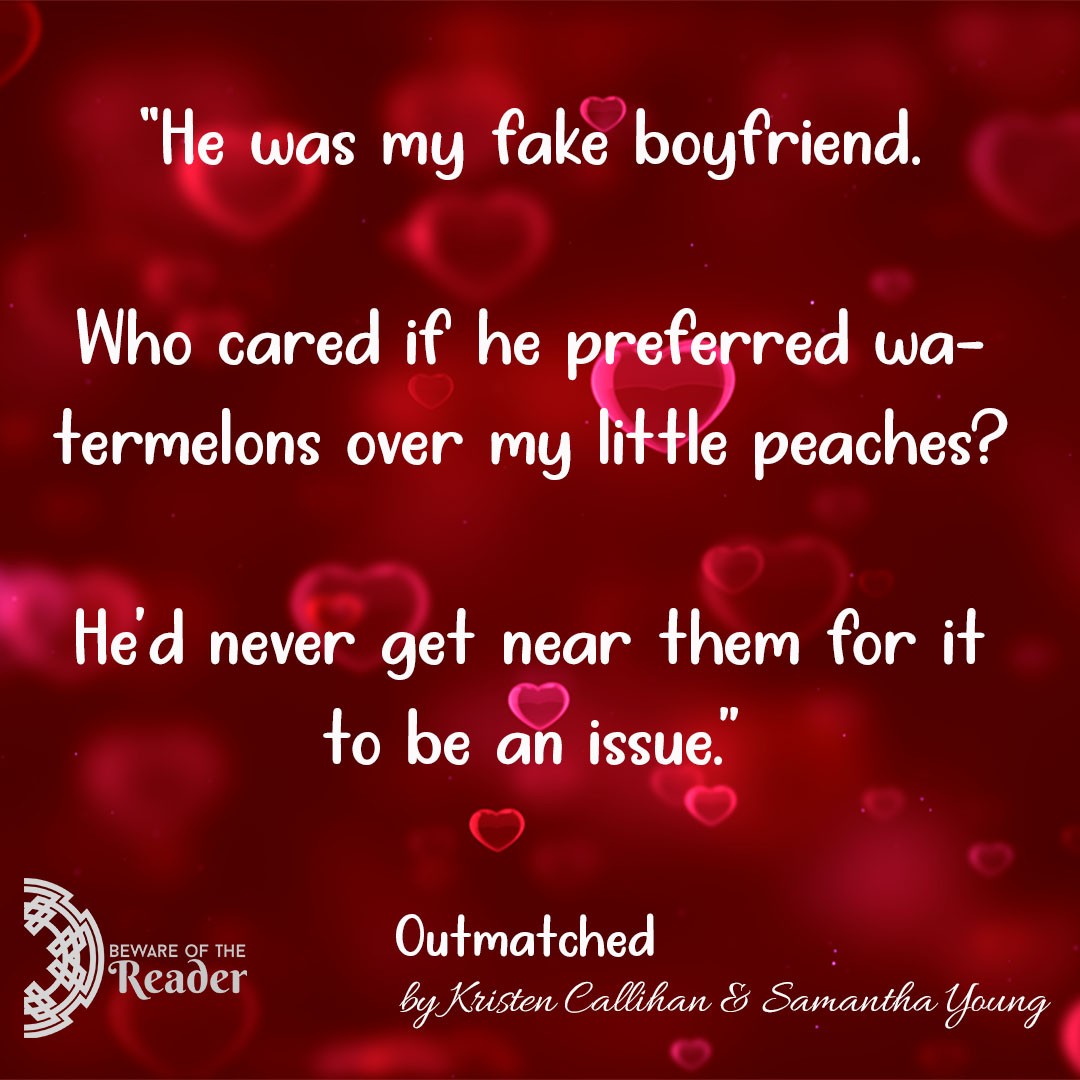 In their acknowledgements the authors wrote that they had a hoot together and “We hope you see that and smiled your way through the pages!” Well the answer is YES!

If there is one constant in this reading experience it was the permanent smile gracing my face and the occasional snickering at Rhys and Parker’s banter!

Outmatched is an “easy to read” and “prefect to have a great time” kind of story!

It’s supported by two great characters, funny retorts and if the trope has been used and abused it’s perfectly executed by that duo of writers with a “well-oiled machine” feel!

I have loved Kristen Callihan and Samantha Young’s books and together they are a powerhouse of delight! I wonder how they worked together and how many times they must have laughed while writing Parker’s comebacks!

But what is this book about and why is it so great?

Like the synopsis explains, it’s about the unexpected meet of two people who could not be more different.

Parker comes from money but is really far from being a snob. She gets her kick making life greener, something that I really loved about it as our environmental problems are dear to my heart! Graduated from MIT she has a sexy brain in a tiny body.

Working in a very male and sexist environment she is used to stand her ground to big males and has a feisty temper yet with a very proper attitude (never a curse word!).

When she realizes that her misogynistic of a CEO will never offer her a permanent contract if she is not committed to someone, she hires Dean to be her arm candy.

You have to admire her dedication to her job!

Instead of young, yuppie and polished Dean she gets his furious, ex-heavy weight of a brother Rhys!

Rhys is determined to tell her what he thinks for whoring his brother!

But tiny Parker gives as good as she gets and has sass aplenty!

“I’m going to ignore whatever that noise meant since I’ve evolved beyond the Tertiary Period.”

This gives us our first heated scene with the promise of more great banter to come!

“She was a piece of work with her outraged protestations of innocence. That she somehow managed to look down her cute nose at me even though the top of her head barely reached my shoulder was a true talent. Little Miss Priss had actually shooed me. It would have been adorable if she hadn’t been trying to buy my brother’s services.”

See what I mean with the banter? 😊

Only Rhys will realize that he has all to win pretending to be THE boyfriend. They’ll come to an agreement of fake dating for their mutual interest. Even if they are a far cry form the usual people they date! Parker loves them preppy and polished, Rhys amazons with big assets!

And of course, that’s the “used and abused” trope that I was talking about.

That’s the beginning of the story and we will have the joy to discover Rhys’s awesomeness!

“Okay, so I could admit that he was attractive in that caveman, overtly masculine, alpha-male kind of way that some women found appealing. I wasn’t one of them. I was above that sort of primal need for power and strength in my chosen mate. At least I was determined to be.”

I don’t know you but I love big muscled male oozing testosterone and of course Rhys being an ex- heavy weight fits the bill! But Rhys may be a bruiser and he may come not from money, he is smart and has a big heart with lots of worry to take on his shoulders!

He truly was a good guy and for all his past as a player prime husband material as he’ll always have your back. That’s one of the many things that I loved about him as he always defended Parker.

Hot, powerful, smart, loyal, protective, …what’s not to like about him right?

“Brutish boxer with his gigantic heart and secretly gentle soul.”

I also loved how the relationship progressed backed by the nickname they gave each other (Parker was “Tinkerbell” or “AngryTink” and “HotHarley” for Rhys), the reveal of their secrets and their common “enemy”.

It is not a slow burn exactly as the chemistry is sizzling from the very first pages!

Add to it a good side characters cast, with some of them that I hope will get their own book like sexy/geeky Ren, Carlos and Dean, a scheming villain and you get a very enjoyable romcom, perfectly executed!

Have you read any book by these authors? Do you like “opposite attracts” and “fake date” stories?

And here is more about Kristen and Samantha:

Kristen Callihan is an author because there is nothing else she’d rather be. She is a RITA winner and three-time nominee and winner of two RT Reviewer’s Choice awards. Her novels have garnered starred reviews from Publisher’s Weekly and the Library Journal, as well as being awarded top picks by many reviewers. Her debut book FIRELIGHT received RT Magazine’s Seal of Excellence, was named a best book of the year by Library Journal, best book of Spring 2012 by Publisher’s Weekly, and was named the best romance book of 2012 by ALA RUSA. When she is not writing, she is reading.

Samantha Young is a New York Times and #1 International bestselling author from Stirlingshire, Scotland. On Dublin Street was Samantha’s first adult contemporary romance series and has sold in thirty countries. She has since published over thirteen romance titles including the New York Times Bestsellers Into the Deep, Hero, and her most recent contemporary romance Play On. When writing Adult Paranormal romance she writes under the pen name S. Young.