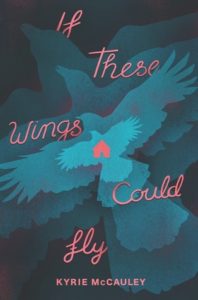 Perfect for fans of Laura Ruby, Laurie Halse Anderson, and Mindy McGinnis, Kyrie McCauley’s stunning YA debut is a powerful story about the haunting specter of domestic violence and the rebellious forces of sisterhood and first love.Tens of thousands of crows invading Auburn, Pennsylvania, is a problem for everyone in town except seventeen-year-old Leighton Barnes. For Leighton, it’s no stranger than her house, which inexplicably repairs itself every time her father loses his temper and breaks things.

Leighton doesn’t have time for the crows–it’s her senior year, and acceptance to her dream college is finally within reach. But grabbing that lifeline means abandoning her sisters, a choice she’s not ready to face.

With her father’s rage worsening and the town in chaos over the crows, Leighton allows herself a chance at happiness with Liam, her charming classmate, even though falling in love feels like a revolutionary act.

Balancing school, dating, and survival under the shadow of sixty thousand feathered wings starts to feel almost comfortable, but Leighton knows that this fragile equilibrium can only last so long before it shatters.

I confess that what first drew me to the book is the gorgeous cover and once I read the blurb it had all the ingredients that I am looking for in a YA contemporary story and more.

This is a first work that certainly does not feel like a first!

Kyrie McCauley has written about a very sensitive topic with great insight and lots of care without ever being patronizing!

And that’s what this story does.
Because domestic violence does not generate black and white feelings for the abused.
Leighton’s father was not bad all the time. He had not always been an abuser.
He would also always remain her father.

Leighton’, mother was not weak either for staying with him. She had a loving past with the man and it was hard to brush it under the rug. She would always endanger herself to protect her kids. That’s not someone weak.

There is also the shame, the guilt and the silence.

Kyrie gave us a unique insight with every scene feeling so real, pulling me under. When Leighton and her sister waited for the storm to hit. Because there was a tension in the air. A quality in the silence. And they just KNEW the peace would break soon.
The wait was sometimes so unbearable because that’s the anticipation that hurts the most. So much that they would provoke his ire and start the storm. Because when it starts you know that it will end. And right after the end of the storm was the safest they felt.

This is also a punch in the face when you realize how so many people conveniently turn a blind eye on abuse.
From the old neighbor who has been raised with “a woman must endure and support her husband”, to the Police chief who says nothing because he is an old friend of the abuser. So many people could have helped and did nothing.

I could go on and on about the complexity of that topic but I would like to focus on every little things that gave me hope, brought warmth to the story along with a unique shine.

First: the sibling love and support.
Leighton would have done everything to protect her little sisters. And they would have done the same. Their bond was strong. It was the cement of their resistance. The fuel to go on and live day after day in this horrible environment.

Second: the friendship.
Sofia was very supportive of Leighton, always ready to welcome her or gift her something when money was tight at home. She never judged once. She never pushed. But she was always supportive.

Third: the love story.
I am also a romance reader and Liam’s support was incredible. He may have been a star on the football field, beloved by so many at school, never did he make Leighton feel less than perfect.
He never pushed her but always stood by her side. Liam was a perfect book boyfriend! And I really liked to witness their relationship progress.

Fourth: the paranormal element.
Using the crows in this context was symbolic, like a storm brewing and building up and up. Becoming stronger day by day. They can’t be ignored. They refuse to be ignored.
And the house also became the embodiment of the abuse, the anger. Some tangible evil entity, trapping the family inside and condoning the abuse.

I could honestly write an essay on that book as the layers of complexity are impressive. I know I will still ponder on the many thoughts I had while reading.

I think that book should be included in school programs to open the eyes, maybe free some tongues and who knows, save lives!

A HUGE thank you to Harper360UK for sending me this copy as I had a marvelous time reading it. And, of course it has no influence on my willing and always honest review.

On a side note, I have always loved crows as I believed they were very smart and this story just confirmed it!

Have you read something similar? What do you think of the cover?