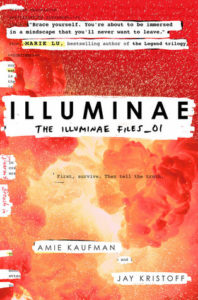 This morning, Kady thought breaking up with Ezra was the hardest thing she’d have to do. This afternoon, her planet was invaded.The year is 2575, and two rival mega-corporations are at war over a planet that’s little more than a speck at the edge of the universe. Now with enemy fire raining down on them, Kady and Ezra — who are barely even talking to each other—are forced to evacuate with a hostile warship in hot pursuit.

But their problems are just getting started. A plague has broken out and is mutating with terrifying results; the fleet’s AI may actually be their enemy; and nobody in charge will say what’s really going on. As Kady hacks into a web of data to find the truth, it’s clear the only person who can help her is the ex-boyfriend she swore she’d never speak to again.

Told through a fascinating dossier of hacked documents — including emails, maps, files, IMs, medical reports, interviews, and more — Illuminae is the first book in a heart-stopping trilogy about lives interrupted, the price of truth, and the courage of everyday heroes.

I first tried to read this book nearly two years ago. I went the “classic” road and had the paperback but I stopped after 120 pages as the format was putting me off my read.

This book is very unique in its conception as you have files, briefing notes, then dialogues and some schemas of spaceships. You are constantly shifting between these formats and that made for a broken story. I simply could not focus as I apparently need something more linear with the plot unfurling steadily with one or two point of view, bare of briefing notes or interviews.

There is only one physical book that broke that rule and still interested me: Sadie. But we only had two formats: one podcast and Sadie POV.

Yet, as everyone was gushing over that book, a trusted friend recommended the audiobook to me.

In the beginning, I had the same issues but soon enough, I truly was immersed in the story and able to finish it in a matter of a few days.

The audiobook is brilliant!

We have a whole crew of narrators, every single one really good AND we have special effects.

You have an “off voice” sounding like these distorted voices of masked witnesses you hear on the television.

You have beeping noises and a nearly constant hum as background noise, plunging you into the belly of a spaceship crossing the galaxies while simultaneously hunted by another ship and threatened by an unknown plague.

I find movie with spaceships and astronauts very oppressive and I had a similar feel listening to the book.

The tension is so thick you could cut it with a knife and you will really feel like being in space. I had to remind me that I as on earth and NOT in that spaceship!

The plot is also very efficient as you have twists and turns aplenty. The ending totally surprised me!

I was constantly on edge, wondering if our heroes, Kady and Ezra would beat the odds or get infected by that virus or get pulverized by the Lincoln who was chasing the Hypathia and the Alexander to erase every trace of their foul play.

Some scenes had me panting, when you had crazed infected rushing after one or another hero in a deadly chase of cat and mouse! All that happening on a spaceship made an escape even more improbable!

The tone of the story slowly shifted. In the beginning, when the threat is present but not too serious, Kady and Ezra’s banter is light and I enjoyed the sarcastic remarks. The more the threat develop, the more serious the tone. Soon, it was all banter with very sharp edges, especially between Kady and the AI Aidan.

If, like everyone else I think, I loved the love story (kind of second chance romance astonishingly) and of course, Kady (spunky) and Aidan (loyal and courageous) , my feelings for Aidan truly surprised me.

Most of the book I despised that killing and crazy machine.

Closer to the end, when he had all these conversations with Kady, I felt …pity and sadness. It was fascinating to see that AI developing what was something akin to human feelings. Being afraid of being undone, even if he could be remade. Because he would never be exactly the same, have the exact same experience and memory.

I dare say that he fell in love with Kady and their duo at the end of the book was at the same time gripping and nostalgic.

There is no doubt that this story is brilliant.