”There is no such thing as bad people. We’re all just people that sometimes do bad things”

OK Ladies and Gentlemen,  you’ll find my review AND the link to my friend Danielle’s review @ Pretty Mess Reading

Really go read her review because that chick has guts and will give you her naked truth! I’m just in awe of what she wrote.


Lily hasn’t always had it easy, but that’s never stopped her from working hard for the life she wants. She’s come a long way from the small town in Maine where she grew up – she graduated from college, moved to Boston, and started her own business. So when she feels a spark with a gorgeous neurosurgeon named Ryle Kincaid, everything in Lily’s life suddenly seems almost too good to be true.

Ryle is assertive, stubborn, and maybe even a little arrogant. He’s also sensitive, brilliant, and has a total soft spot for Lily, but Ryle’s complete aversion to relationships is disturbing.

As questions about her new relationship overwhelm her, so do thoughts of Atlas Corrigan – her first love and a link to the past she left behind. He was her kindred spirit, her protector. When Atlas suddenly reappears, everything Lily has built with Ryle is threatened.

With this bold and deeply personal novel, Colleen Hoover delivers a heart-wrenching story that breaks exciting new ground for her as a writer. It Ends With Us is an unforgettable tale of love that comes at the ultimate price. 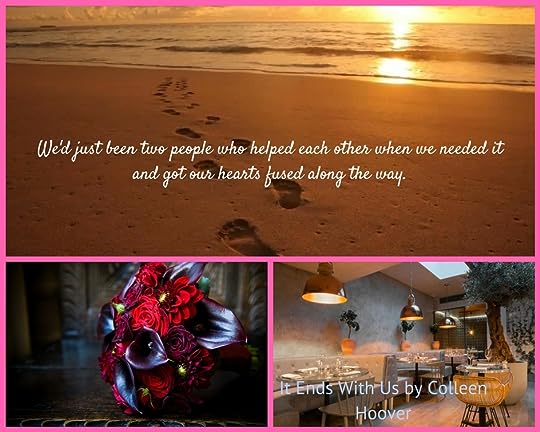 This is probably my favorite book by Colleen Hoover. I’ve loved some of her books, Hopeless being my favorite two days ago, not being touched by others so much but here I must say I fell in love with this story.

I don’t want to tell too much about the plot as it’s better you discover it by yourself. Just know that Atlas stole my heart and I had to grasp tissues many times while reading his story. Lily was an incredible character compassionate, passionate and strong. What I loved above all else was her honesty. She dared examine her faults, her naked truths and did not shy from some hard reality. She realized what she took for granted, her vision of her mother was not exactly black and white but rather hundred shades of gray.

Lily Blossom Bloom (yes her name made me smile huge) met Atlas Corrigan when she was fifteen. He was homeless, eighteen and lived temporarily in an abandoned neighboring house. He went to school by bus, did not smell good, had no electricity, no water, no food, nothing.
Lily had a huge heart and helped him behind her parent’s back the best she could. Soon they’ll form a friendship watching Ellen DeGeneres’s TV shows in Lily’s house. They had to be quiet, to smuggle Atlas because Lily’s dad was not the best man on earth.

I found CoHo’s idea to retell Lily’s memories of Atlas through her Ellen’s diaries genius! These diaries were the best part of the book as I fell in love with Atlas right from the start. He was so dignified, so kind and so… abandoned he broke my heart. I wanted to hug Lily for her kindness and generosity. She was a fantastic character.

”Why don’t you live at home with your parents?” He stared at me for a few seconds, like he was trying to decide if he wanted to trust me or not. Then he said, “Because they don’t want me to”.

Atlas was somewhat desperate and did not know how he could make something useful out of himself. He wanted to join the army but he had to survive and graduate first. Lily gave him the strength and the hope.

”Plants need to be loved the right way in order to survive. So do humans…If we’re neglected …” His voice grew quiet. Almost sad. He wiped his hands on his knees, trying to get some of the dirt off. “If we’re neglected we end up homeless and incapable of anything meaningful.”…”You see that tree over there?” In the middle of the row of trees was an oak tree that stood taller than all the rest of the trees. “It grew on its own. Most plants do need a lot of care to survive. But some things, like trees, are strong enough to do it by just relying on themselves and nobody else.”

Colleen Hoover’s writing was very simple and down to hearth. She broached very hard topics without sugarcoating it neither overplaying the drama. It simply was. And it was very effective.

Years later Lily will meet a handsome and very driven neurosurgeon, Ryle. For all his hotness, attentions, courtship and change of heart as he wanted only a one night stand in the beginning I never let myself fall for Ryle. It was like Atlas had stolen my heart and I had erected a wall around it, preventing me to love Ryle. He was a lost cause to me but I must admit he was charming, well behaved, brilliant and had very good intentions. He loved Lily but…I was biased from the start.

[ I hate love triangle and did not know how CoHo would play this out as I feared Lily would be torn between the two men but it was not really a love triangle. And there was no cheating as I can’t stand cheating in a book. (hide spoiler)]

This book made me cry, made me smile with the naked truths, made me swoon and made me angry, very, very angry on Lily’s behalf. I’ve also been knocked off of my socks as I was forced to reconsider some preconceived views I had on women experiencing what Lily did. Like Lily I could not understand what they chose to do. It was incomprehensible. CoHo took me on Lily’s journey and I discovered the complexity of the topic. Everyone has its own story, its own good or not so good reasons to behave a certain way. This humbled me and for that I’m grateful to Colleen Hoover as I love books that make me think and challenge my beliefs.

My only regret: I would have loved a second epilogue, some years later. But that’s just me being greedy.