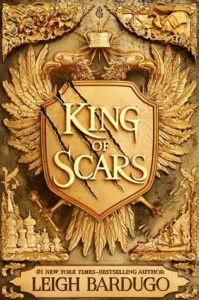 Nikolai Lantsov has always had a gift for the impossible. No one knows what he endured in his country’s bloody civil war—and he intends to keep it that way. Now, as enemies gather at his weakened borders, the young king must find a way to refill Ravka’s coffers, forge new alliances, and stop a rising threat to the once-great Grisha Army.Yet with every day a dark magic within him grows stronger, threatening to destroy all he has built. With the help of a young monk and a legendary Grisha Squaller, Nikolai will journey to the places in Ravka where the deepest magic survives to vanquish the terrible legacy inside him. He will risk everything to save his country and himself. But some secrets aren’t meant to stay buried—and some wounds aren’t meant to heal.

“The monster is me and I am the monster.”

Spoilers for Crooked Kingdom and Six of Crows here so, don’t read if you haven’t read them but plan to!!!!!!!!

I’d like to praise the narrator Lauren Fortgang! She brought this story to life and perfectly impersonated insolent Zoya; sarcastic and dashing Nikolai, distracted and nonchalant David and the mourning Nina.

This book follows two main storylines: one featuring Nina as the main protagonist, helped with two other grisha Leoni and Adrik that we met in the grishaverse trilogy.

The other storyline follows Nikolai, aided by Zoya Nazyalensky and some other characters from the Shadow and Bones stories.

Not only does Leigh Bardugo alternates between these stories but also between three POV and all that without losing her reader nor diming the tension and interest for the plot!

By now I just know that Leigh is an immensely talented story teller!

On thing really broke my heart here as Nina has changed so much!

In Six of Crows she was buoyant and always joyous even in the face of danger. Her flirting and sunny personality, her wits that I admired so much in have now vanished. She is grieving Matthias and one scene had me in tears while driving as I made the mistake to listen to the audiobook on the road!

Gah! I so miss my giant drusquelle and the couple he formed with Nina!!!!

Nina’s power has changed, that we knew already, and she now hears the dead.

Trying to help King Nikolai as a spy and saving grishas she will veer course to follow “a lead” in Fjerda, no telling more here. Nina will discover atrocities. She’ll be bold in her actions, following her intuition and her heart.

“She wished she had Inej’s gift for spywork or Kaz’s gift for scheming, but she only seemed to have Jesper’s gift for bad decisions.”

Nina will face dangers head on, escape some bad situations at the last minute aided by an unexpected ally.

I still love Nina so much! I loved learning more about her childhood.

Parallel to her story we follow Nikolai while he is trying to save his country and make it prosperous again. Zoya is now his general and pressures Nikolai to marry and produce a heir to ascertain Nikolai’s reign and save Ravka.

The time is against them as Nikolai has been left with a dark gift from the darkling. Something dark inside him that he wants to get rid of. That’s what Zoya and a young priest will try to help him do.

Nikolai is really someone that I love and admire. We learn so much about his past, how he was as a child, how his parents and tutors despaired of him. He is a good man and a good king. He truly cares for his people, for Ravka. And God! Is his mind brilliant!

That’s why I hope for another future than what he chose at the end of King of Scars. Yes being a monarch asks sacrifices but I want him to be happy!

“He’d come to recognize the bizarre phenomenon of Zoya’s beauty, the way men loved to create stories around it. They said she was cruel because she’d been harmed in the past. They claimed she was cold because she just hadn’t met the right fellow to warm her. Anything to soften the edges and sweeten her disposition–and what was the fun in that? Zoya’s company was like strong drink. Bracing–and best to abstain if you couldn’t handle the kick.”

My only complaint here is a possible love interest for Nina. I am a big romantic and as sad and egotistical as it seems, I want her to be a “one-man woman”.

And I found the perfect fanart for this series created by Allarica  (just click on the link) https://www.instagram.com/p/BuOwvDinuy3/