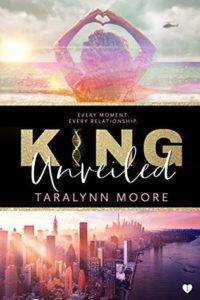 Bria has no idea her life is a carefully woven tapestry of design and predestination. Until a helicopter, a quiet beach cove, and the pull of piano chords usher in the unraveling of her world.

His music sparked her spirit, long before she knew him, before she knew herself. Now, with love and lives on the line, they can’t escape their fated connection or the family company that owns them and their hearts.

Jon has been her constant companion. Her rock. Her anchor. But when the perfect outcome of their parental set-up turns out to be a cover, her protected existence begins to fall apart, and so does their relationship and its foundation of necessary lies.

All three must unite, must fight, for family, for freedom, with a bond so strong even torn hearts can’t tear them apart.

And don’t miss King Abdication, the riveting second book in the KING series releasing fall of 2019!

When an author tells you that if I liked Shatter Me I would probably like her book ….she knows how to sell the goods! LOL

I was a little bit apprehensive because you never know with a first work if you’ll love it or if the story will have plenty of room for improvement. That’s happened to me in the past and I am always cautious not to expect too much.

In the beginning I was …rolling my eyes!

There was some insta-love or attraction, some stuck up boyfriend and a female character that seemed a little bit too sweet. So I was thinking it would be a 3 stars max and already dreading writing the review.

Then I made some progress and around 45% in the book I was all “Oh but that’s good”!

There are lots of secrets and some began to be unveiled. I was intrigued!

The stuck-up and quite rigid boyfriend, Jon, was way more amazing than what it seemed on the surface.

The female character, Bria was still very kind but she began coming out of her shelf and growing a backbone.

The powers at play seemed much more complicated than at first glance.

The whole plot was much more intricate than what it seemed and I was glad to have plenty of action, some helicopter escape, some car race (said car reminded me of the James Bond movies), some diving under falls to reach a hidden cove, some ….

Plus let’s not forget all the male goodness in the story.

I can’t really speak about the plot as the pleasure of reading this story truly relies in its mystery.

What I can tell you is that it revolves around three main characters: Bria grand-daughter of Sam who founded a huge security firm and daughter of an evil mother (at least she seemed evil to me).

She may live a very comfortable life, she likes nothing more than getting back to her roots in Brooklyn, to her grand-mother Ona and visit orphaned children. Bria has an uncanny capacity to play music and recall every sound she’s heard, be it music or foreign language.

In the beginning of the story he appears quite “cold” and a little bit distant. More in the “friend zone” than in the boyfriend one. His father and Bria’s mother expect him to date Bria.

Jon is goodness incarnate. He will always protect and take care of Bria.

But of course there is a catch as he is not as he seems! Not telling more but let’s just go with …he will surprise you.

The third main character is David.

Music prodigy David. Gloriously handsome David. David who seems to draw Bria like a magnet even if she has a boyfriend. David who can never linger. David who …. not telling more!

As the synopsis suggests these three are linked and must unite to fight fate, to fight enemies, to be free.

There is a big love triangle element here!

I usually hate it and for a long time I wanted Bria to “just make up her mind” only …I had no favorite either! If I could not choose as a reader how could Bria, much more involved than I be expected to make her choice? Both boys were worthy.

I began saying this was a first work (as far as I know) but it does not feel as first work as Taralynn avoided many traps new authors are faced with. The writing is effortless, you don’t have parts you’d want to cut nor mistakes or … The only fault that I could find was some unnecessary drama in the beginning but I guess Taralynn had to find her pace.

Yes if you are not deterred by love triangles and love romance stories with a side of mystery and a bit of technological thriller.