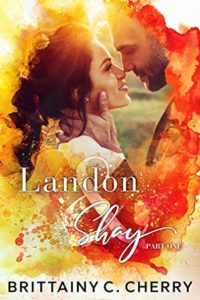 Shay Gable hated my guts, and I hated hers, too.We went out of our way to avoid one another at all times. When she came my direction, I went the other. When we locked eyes, she’d turn and walk away.

All of that changed the day I was presented with a challenge. It started out as a stupid bet: make Shay fall in love with me before I fell in love with her first.

That was an easy bet for me to win.
I didn’t love, I hardly liked.

Yet slowly the game started to shift. Shay made me crave things I never knew I wanted.
Love.
Happiness.
Her.

The closer we grew, the more she challenged my darkness, and the parts I kept locked away.
The hurts.
The pains.
The truth.

The game between us became too real, our feelings intermixed, and the risks of hurting one another grew higher.

But you know what they say…
All’s fair in the game of love and war—especially the heartbreaks. 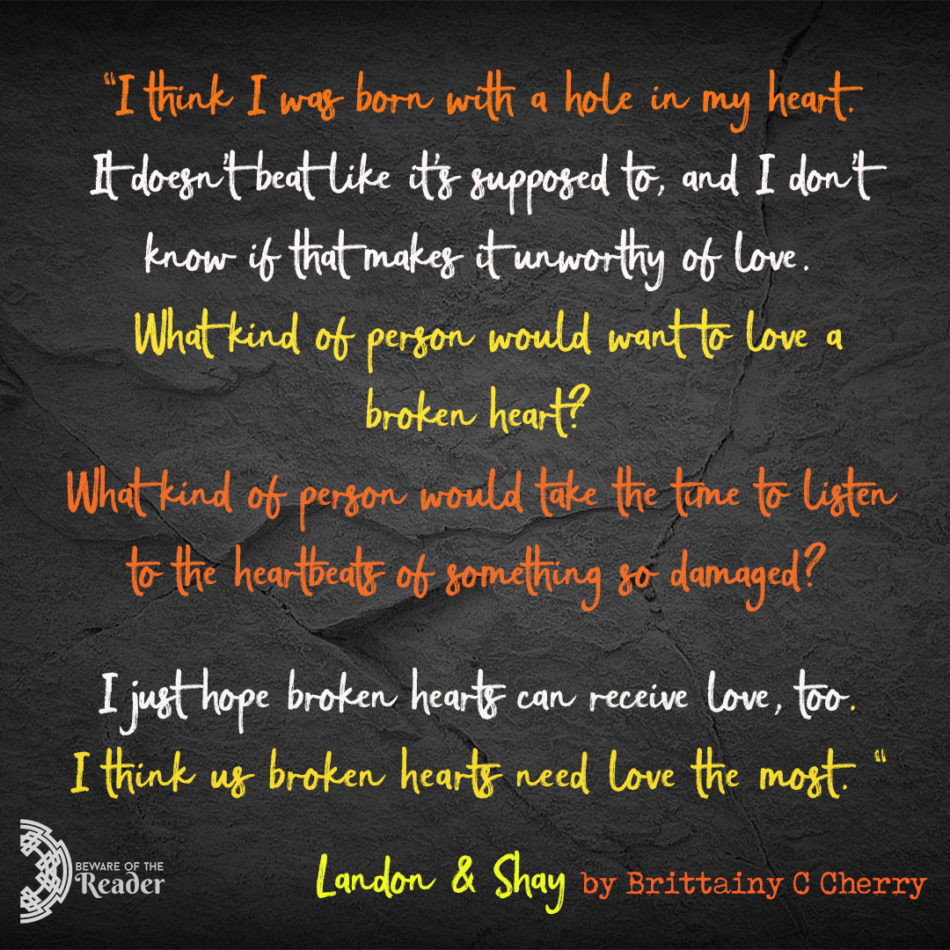 “I think I was born with a hole in my heart. It doesn’t beat like it’s supposed to, and I don’t know if

Gah! Brittainy C Cherry ripped my heart off my chest with this story!

I won’t lie: I disliked Landon very much in the first 15 % of this story because of how he introduced himself at the very beginning of the story!

“If you asked most of my classmates what my name stood for, they’d probably say @sshole. Rightfully so, too.”

It was exactly how he behaved or at least how Brittainy made us see him as he was a total j@rk!

I could not see at all how I would come to care for him!

But boy was I wrong!

He turned out to be one of my most favorite broken heroes and I’ll explain how below!

Landon and Shay is a true love story with broken people who have broken people’s problems. So many characters are hurting and not only Landon or his neighbor Monica but some have skeletons in their closet that you’d never have imagined!

Luckily for these broken heroes we also do have a set of fantastic sunny and loyal cast, their ring leader being Shay!

It’s not only a simple story about a bet to make the other fall for you. No. It delves deep into sad topics like depression, abuse, addiction and neglect.

Honestly Brittainy probably did one of the best portraits of depression that I have ever read about! She totally nailed this. How someone’s mind can become prison and worst enemy. How debilitating this can be. But also, how hard it is to shake depression’s grip. It’s not a simple matter of “willing it to go away”. It takes courage to face his demons. To ask for help. And it takes time to find the proper treatment. This is a long and arduous road and I hope Brittainy will change people’s view on depressed people.

The plot is as you’ve read about two enemies betting to make the other fall in love.

Landon and Shay have always despised each other.

Shay saw Landon as an entitled spoiled boy and Landon considered Shay little miss perfect. It was interesting to see how they planned to win the bet.

“From day one, we never gelled. You know how people have instant friendships? She and I had an instant hateship. I hated her, and her goody-two-shoes personality.”

“That was what us bad boys did: we fed on good girls and tossed them to the side once we were full.”

As I said I was readying myself for a disaster.

But when you really had a glimpse into his thoughts that was a whole other story!

“I learned early on that there aren’t any real villains in life, just heroes who have been beaten down for so long they forget they have the ability to be good.”

Landon made my heart bleed! 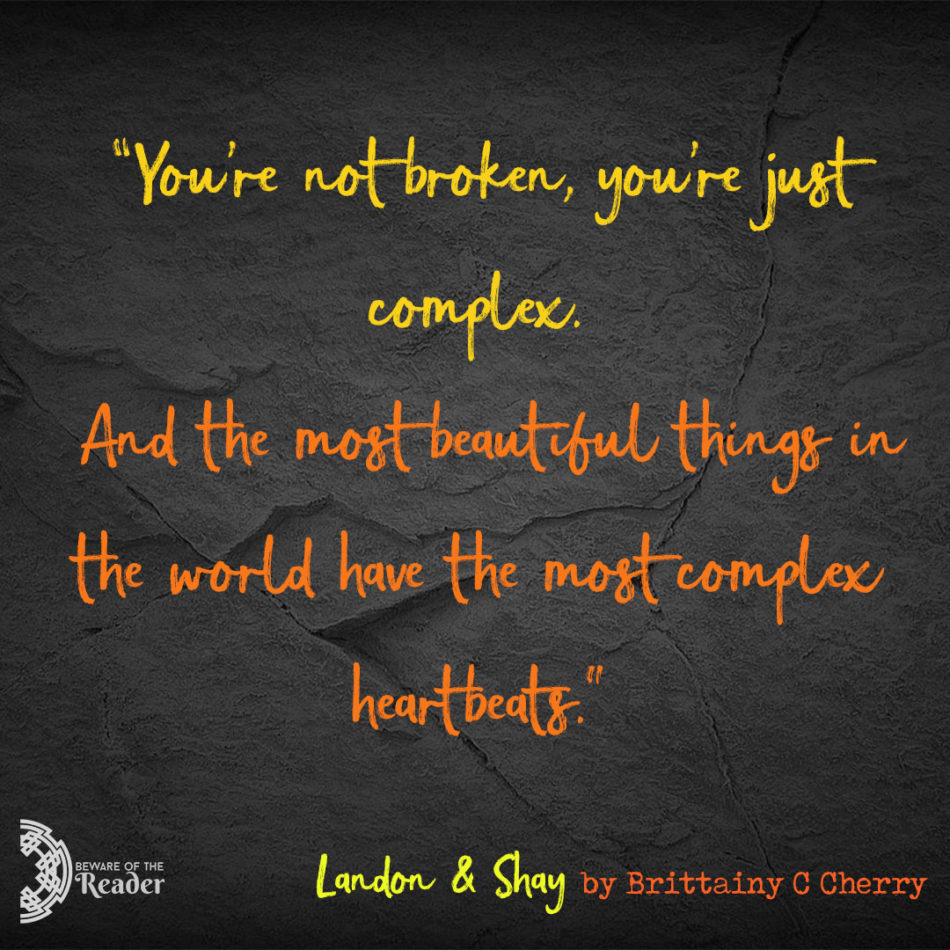 There was so much sadness, so much sorrow for that lost boy! I swear I just wanted to give him a teddy bear hug, hug and never let go. When I got to know him, I realized that he cared so much about people. He was good at heart but he hid it well!

We met Shay in Eleanor & Grey as she is Eleanor’s cousin. Shay is a really sunny character! One that reminded me of Lucy from The Gravity of Us. She brings light everywhere she goes. She is a people’s person and is truly interested in their stories.

She is kind with everyone and how she acted when things were hard and bad, when most would have left everyone behind because the suffering was too great was inspiring!

I loved how Brittainy gave her life and fleshed out her characters with tons of tiny details like her love of candy!

“It seemed she was Willy Wonka and her purse was the chocolate factory with unlimited supplies.”

These are all the ingredients to make us really BE in a character’s life and walk in their shoes.

I took tons of quotes while reading this story because Brittainy truly spoke to my heart.

Shay and Landon’s hate story is just so beautiful that it shone through my kindle. Landon’s struggle hit me square in the chest. His pain was my pain.

I can’t wait to read the second part of their story!

I just want to conclude with another quote, one that resonates deep into my soul: 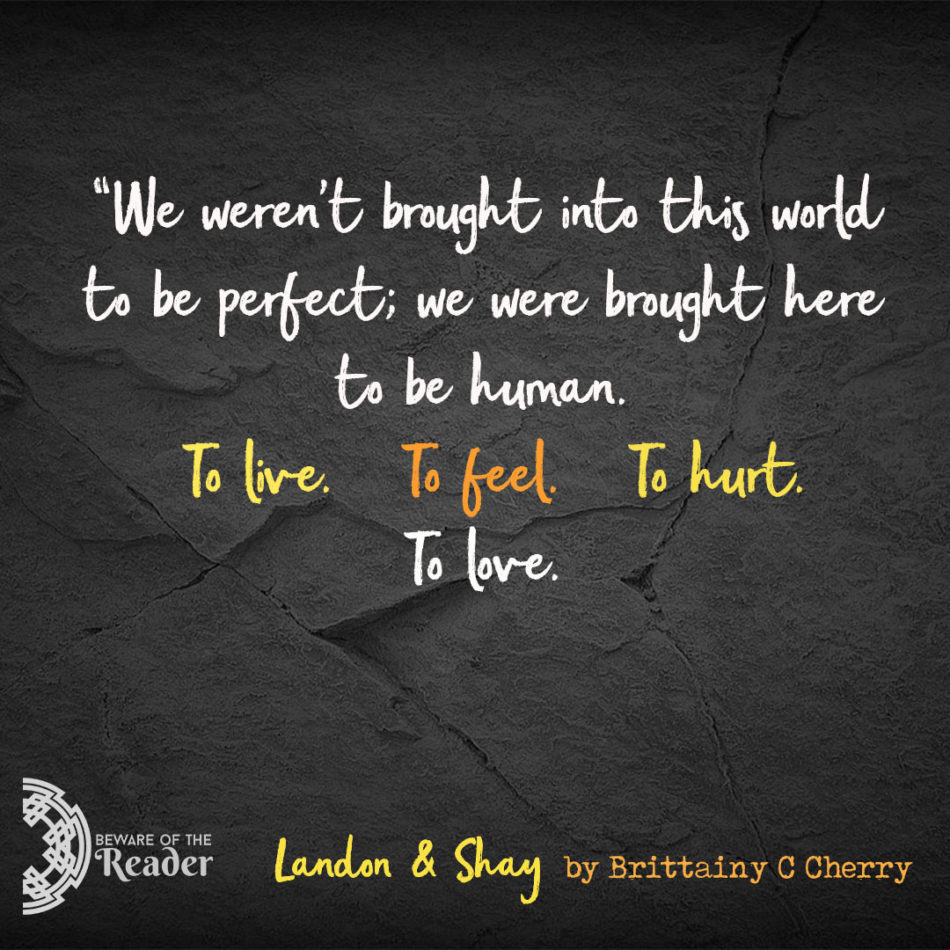 “We weren’t brought into this world to be perfect; we were brought here to be human. To live. To feel. To hurt. To love. To cry. To exist.”

And that’s what this story was for me!

Have you read Brittainy’s books? Do you read books about mental health? Do you want to read this one now?