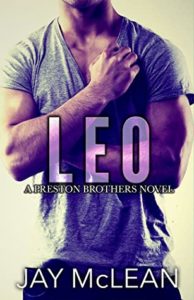 One single summer changed them forever, and one moment of devastating silence destroyed it all. Growing up with six siblings, Leo Preston has always struggled to find his voice.
While his brothers are loud, greedy, and somewhat obnoxious, Leo is forever the quiet one.
The thinker.
The listener.
He watches his life pass by as an outsider in his own world, absent and alone.
Lost.
Until he finds her.

For Leo, Mia Kovács is like a prize, a gift wrapped in passion and devotion.
And she’s his—his very own secret he doesn’t have to share.
Together, they can overcome anything…
heartache and destruction, guilt and regret.

Mia gives Leo everything he didn’t know he needed,
including her fragile heart.
The only thing she doesn’t give him…
are secrets of her own.

5 « almost DNF as it hurt too much” stars

I finished Leo this afternoon and I am a mess.

I went through so many emotions reading that book!

Because Jay chose at one point to use a trope I dislike in romance the “I am choosing this to spare you but I am not asking you”. I HATE when characters choose something to “spare” the other without discussing it! They just rob the other character of his choice under the pretense of sparing them the burden not to choose.

That creates what I am calling unnecessary drama and that’s someone that frustrates me to no ends!

Deep emotional turmoil. I bawled like a baby many times while reading this book. For Mia because what she went through was so unfair and sad. For Leo because he made mistakes but he had to bear the weight of his guilt and deep regrets. He gutted me so often that Preston brother!

I really wanted to kick some behinds here! Beginning with Mia’s mom (I hated that …woman!). Then Lucas and Logan! Yes I know teenagers make mistakes and consider some girls based on their appearances but they were so much more than brats here! They were downright cruel! I haven’t read their stories but I had no good feelings for these kids!

I never understood the need to badmouth others, even privately. I was raised to find qualities in others, not to be condescending so their attitude was unacceptable.

And Leo disappointed me so much at that moment in the story.

Papa’s love for Mia warmed my heart and her friendship with Holden added some sweetness to that otherwise very emotional story!

But what’s this book about?

It’s about Leo, one of the Preston’s brothers who is the most quiet and intense of the bunch. Leo listens to what others say to him. He is a little bit a loner too as he becomes overwhelmed at times by his other boisterous siblings.

When he is thirteen, Mia will come spend the summer with his family as she is their nanny’s daughter.

Both will bond the summer after and have a tight friendship, evolving towards…more.

But their story was far from a calm lake!

Both have flaws and Mia has been hurt so many times in her young life.

It will span on ten years  with many ups and downs.

Mia is a character I wanted to take in my arms and soothe. Jay did an amazing job writing the intricacies of the human mind and heart. That little girl had been rejected so many times! And being a teenager with braces, acne and too much weight, she felt so insecure. Words have the power to cut people open and leave lasting damages.

That’s what happened with Mia.

I was feeling so many things that I thought of DNFing the book. I am glad I didn’t as Jay clearly wrote a masterpiece in human emotions but dang, was the ride hard!