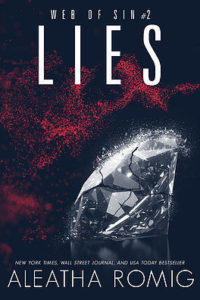 The twisted and intriguing storytelling that you loved in Consequences and Infidelity returns more of with an all-new alpha anti-hero in the dark romance series Web of Sin, by New York Times bestselling author Aleatha Romig.Have you been Aleatha’d?LIES is book two of the Web of Sin trilogy- to be read after SECRETS.

4 “still wondering all the secrets” stars!

Spoiler free review but it will be hard!

First thing first: this is the sequel of Secrets and is meant to be read after Secrets.

Second this is Aleatha turning dark so not her sweet and light side.

Third you have a huge *yes you can interpret this as you want 😉* overbearing and commanding Alpha Sterling Sparrow.

The good news is that Aleatha don’t need years to publish her books and you’ll have the last installment in the series very soon as in about one month!

Aranea/Kennedy tries to learn more about her past while staying safe and managing a very bossy Sterling.

Honestly Sterling would drive me nuts with his orders and will to manage everything yet Aranea holds her ground and give him a run for his money! I have to concede that Sterling is trying.

He so wants to keep her in a gilded cage and I could feel his frustration through my Kindle when he had to concede something to Aranea. They butt heads, they fight and then they melt. Great make up sex is also on the program of course because isn’t it how it works with every couple on the planet?

Even billionaire dark boys are no exception.

Life becomes complicated as Aranea has two identities and one of them even does not exist as she officially died as an infant! When her past and present worlds collide it becomes tricky and she is walking on eggshells!

Better for her than for me mind you! I would never know which name I am supposed to use. Leading a double life is exhausting when you are not used to it and Aranea has to learn the ropes.

I also asked Aleatha if she planned on writing shifter stories because Sterling, Patrick and Reid are all a pack of wolves and Sterling is their Alpha!

“We joke and laugh. We even grieve, but at the end of the day, in a pack there’s only one alpha. That’s your man.”

“It was like all three of them shared a brain. What one knew, the other two did also.”

So you have threats, you have secrets, you have lies, you have horrible truths about the underground, you have plots and everyone tries to manipulate and blackmail Aranea!

She would have a really hard time if not for Sterling’s support. Among all the past tragedies and deceit it was heartwarming to witness their blossoming attachment. I swear they are cute together. Hot yes but cute LOL. Because Sterling planned her “acquisition” and she was meant to be an asset in his plan (yet to be wholly revealed) but she turned out to be so much more to him!

Araneae was important to us all. We’d planned her acquisition together. They knew how imperative having her with us was for many reasons. Up until recently, the plan and execution had all been in theory. However, now that she was with us, we all saw her light. How could we not?

I was not able to put it down as I wanted to learn more about the mystery surrounding Aranea’s past. What did het father do? What vital information is she supposed to hold? Who is Sterling Sparrow really? What’s his game in the underground. Who were her adoptive parents? Are they still alive? Why did her adoptive mother send Aleatha to Colorado? What event triggered this change of plans? And a I am still wondering about her friend Louisa and her family. I find a little bit too convenient and coincidental that they adopted Kennedy right away and …. But OK maybe that’s the “Aleatha’s effect” and she is turning me into an FBI agent doubting everything!

Oh and funny side effect: I had my husband read this sentence from the book: “How hard was it to move a dish and glass from the counter to the dishwasher? Apparently, if you possessed a Y chromosome, the answer was impossible.”

And victory! He put his dish in the dishwasher!!! I should make him read my books more often LOL