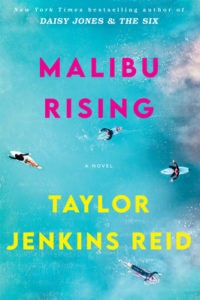 Malibu: August 1983. It’s the day of Nina Riva’s annual end-of-summer party, and anticipation is at a fever pitch. Everyone wants to be around the famous Rivas: Nina, the talented surfer and supermodel; brothers Jay and Hud, one a championship surfer, the other a renowned photographer; and their adored baby sister, Kit. Together the siblings are a source of fascination in Malibu and the world over–especially as the offspring of the legendary singer Mick Riva.The only person not looking forward to the party of the year is Nina herself, who never wanted to be the center of attention, and who has also just been very publicly abandoned by her pro tennis player husband. Oh, and maybe Hud–because it is long past time for him to confess something to the brother from whom he’s been inseparable since birth.

Jay, on the other hand, is counting the minutes until nightfall, when the girl he can’t stop thinking about promised she’ll be there.

And Kit has a couple secrets of her own–including a guest she invited without consulting anyone.

By midnight the party will be completely out of control. By morning, the Riva mansion will have gone up in flames. But before that first spark in the early hours before dawn, the alcohol will flow, the music will play, and the loves and secrets that shaped this family’s generations will all come bubbling to the surface.

Malibu Rising is a story about one unforgettable night in the life of a family: the night they each have to choose what they will keep from the people who made them . . . and what they will leave behind.

This was one of my most awaited reads this year and it didn’t disappoint in the least! Taylor Jenkins Reid is a formidable storyteller and Julia Whelan was the perfect choice to narrate this story with her cultured and smoky voice.

The book focuses on the party of the year: Nina Riva’s party. Where everything happens, careers are made and scandals erupt between the rich and famous every year.

This year though Nina doesn’t want to hold the party.

Yet she’ll do it for her siblings as it’s their tradition.

Every sibling attending the party has a secret or a burden that they wish to share but once out in the open at the end of the night, it will shape their future.

The plot switches between “that night” and the sibling’s past. How their mother June met their father, Mick Riva, soon to be a legend in the music world. How some men are not reliable and won’t hold to their promises, abandoning their wife and children to chase fame, leaving them to fend for themselves.

That book succeeds in combining a very good plot, a perfect pacing, an amazing world building going back to the 1980ies and multi-dimensional characters.

Taylor’s elegant and effective writing transported me back in time, following that story filled with love, hope, betrayals and life.

I will always be a character driven reader and the cast was impeccable! You have:

–Nina Riva a good, dutiful and nurturing person. She took over her parent’s role when they left the scene. She run herself to the ground to make sure her siblings were fed, clothed and educated. And she accomplished the miracle of becoming a famous sports model.

“She knew it was up to her to say what had to be said. To do what had to be done. When there is only you, you do not get to choose which jobs you want, you do not get to decide you are incapable of anything. There is no room for distaste or weakness. You must do it all. All of the ugliness, the sadness, the things most people can’t stand to even think about, all must live inside of you. You must be capable of everything.”

-Jay began as the prodigy surfer, going through women as he would dirty laundry yet fundamentally a decent person to a complicated hero. Scared of what the future had in store for him.

–Hudson, the half sibling but who was Riva to his core. The one feeling deeply, loving with all his heart and who was so riddled with guilt. You can be a good guy like him and do something hurtful. Does it mean you don’t deserve redemption?

–Kit, the youngest, boyish and ready to be taken seriously as a professional surfer. She was so protective of her siblings too.

-Mick Riva a really bad parent and husband! He acted as such a coward yet I couldn’t help but feel sorry for him. Because at one point he did try. He truly wanted to have someone by his side, to build something with her.

“Mick didn’t want to go through the world alone. He had one of those hearts that stick to things. And he wanted to stick to her. She seemed like such a good one to stick to.”

But he just seemed to repeat his parents mistakes.

–June was an amazing woman who had so much love to give. Never hesitating for one minute to adopt her husband’s illegitimate son and love him like her own. Yet she wasn’t flawless but then none of us is.  She dreamt escaping her parent’s life, ended up stuck into it, yet she rallied and worked so hard to raise alone her four kids! She didn’t deserve what Mick Riva did to her.

But then none deserved it.

“But they were in love, the kind of love that hurts. They hit highs so high neither of them could quite stand it, and lows so low they weren’t sure they’d survive them.”

All these characters were flawed, relatable, extraordinary and so resilient! They never stopped fighting.

I never thought a story happening in the span of 24 hours would passionate me like this, even with the flashbacks. But then of course it’s Taylor Jenkins Reid we are talking about, the master story teller.