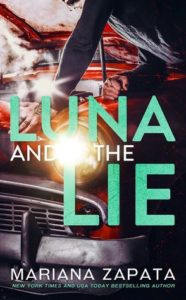 The problem with secrets is that they’re too easy to keep collecting.Luna Allen has done some things she would rather no one ever know about. She also knows that, if she could go back in time, she wouldn’t change a single thing.

With three sisters she loves, a job she (mostly) adores, and a family built up of friends she’s made over the years, Luna figures everything has worked out the way it was supposed to.

But when one of those secrets involves the man who signs her paycheck, she can’t find it in her to regret it. Despite the fact that he’s not the friendliest man in the world. Or the most patient.

Sometimes there are things you’re better off keeping to yourself

Short review for once …

First let me begin with this: I usually love MZ’s books. The Wall of Winnipeg and Me is my favorite.

Second: it’s not because I did not adore this one that I will quit reading her books because many worked really well for me.

The problem is that I think she could have cut 15 to 20% of the book and it would have worked better for me.

Why?
Because we were running round and round with Luna’s pep talk.
Don’t misunderstand me: I think her way to choose being happy despite everything that happened to her for years is just fantastic and uplifting. I wish I could do the same and maybe I will begin wearing something fun every day.

Mariana used it too often for the first 50% of the book.
Something negative happened? We got that pep talk. Again and again and again.
I know she uses it like a mantra. And Luna had to.
Because she was a fantastic and adorable heroine.
SO
This is not Luna’s fault (I already hear her saying she is sorry…) but it is Mariana’s responsibility….

THEN
I don’t mind slow burn. But I do mind the absence of romance for about 75 to 80% of the book.
There is slow burn and there is immobile burn!
Ripley was a j@rk many times but that’s not unusual with Mariana’s heroes. Yet what I found disappointing was that he did not show any sign of attraction or like for a looooooooooong time. Very, very, very loooooooong time.

I wanted to quit and nearly did.
Yet I soldiered on because I knew (or hoped) that the slow burn would happen ….at some point.

The redeeming quality of this book really was Luna.
I know some will find her too sweet and kind. But I thought she was one of the toughest heroines that I’ve read about. Because she chose to be happy. She could have been bitter and resentful. Nope. She chose to embrace goodness, generosity. To overlook anything that could or had hurt her and to not lose her breath on the bad that happened. Because wallowing in your misery never accomplished anything.
And she dared opening her heart to others when it had been trampled so many times already. That is real courage.

She really is a characters to root for!

Now it’s your turn: do you love Mariana’s books? Have you read this one?