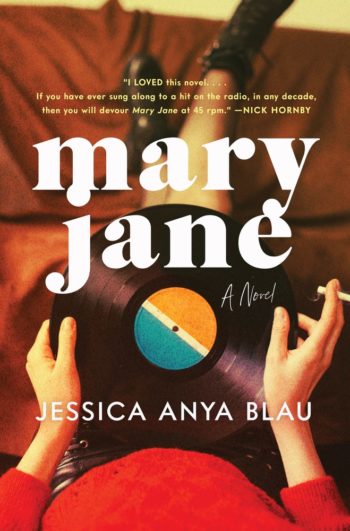 “Almost Famous” meets Daisy Jones and the Six in this funny, wise, and tender novel about a fourteen-year-old girl’s coming of age in 1970s Baltimore, caught between her strait-laced family and the progressive family she nannies for—who happen to be secretly hiding a famous rock star and his movie star wife for the summer.In 1970s Baltimore, fourteen-year-old Mary Jane loves cooking with her mother, singing in her church choir, and enjoying her family’s subscription to the Broadway Show Tunes of the Month record club. Shy, quiet, and bookish, she’s glad when she lands a summer job as a nanny for the daughter of a local doctor. A respectable job, Mary Jane’s mother says. In a respectable house.

The house may look respectable on the outside, but inside it’s a literal and figurative mess: clutter on every surface, IMPEACHMENT: Now More Than Ever bumper stickers on the doors, cereal and takeout for dinner. And even more troublesome (were Mary Jane’s mother to know, which she does not): The doctor is a psychiatrist who has cleared his summer for one important job—helping a famous rock star dry out. A week after Mary Jane starts, the rock star and his movie star wife move in.

Over the course of the summer, Mary Jane introduces her new household to crisply ironed clothes and a family dinner schedule, and has a front-row seat to a liberal world of sex, drugs, and rock-and-roll (not to mention group therapy). Caught between the lifestyle she’s always known and the future she’s only just realized is possible, Mary Jane will arrive at September with a new idea about what she wants out of life, and what kind of person she’s going to be.

6 stars ! And huge crush on that book!

I’d recommend this one to anyone who loved Daisy Jones and the Six or Malibu Rising.

If you’d like to listen to that book instead of reading it, go for it you won’t be disappointed! The narrator Caitlin Kinnunen was perfect for Mary Jane’s young voice!

Writing this review will be difficult to give justice to the tone of that story, a mix of young and fresh view on life with lots of wisdom and rock’n roll moments!

This was the collision of two different worlds that shouldn’t have worked together but strangely did thanks to Mary Jane making the bridge between these two universes.

On the one hand, you have the very proper world of Mary Jane’s parents. Her father is a lawyer, her mother a housewife who takes pride in cleaning her house spotless, cooking the best three course meals every day and teaching at Sunday school.

In that world, you never shout. You never say “I love you” and you never curse. You don’t hug either and a mother will always cook for her family. You also never walk barefoot nor wear clothes without a sturdy bra.

On the other hand, you have the Cone’s world.

It’s a world where the father is a psychiatrist, the mother may be a doctor’s wife but she never cooks homemade meals, nor wear bras or tidy up the house.

It’s a world where their little girl, Izzy, is walking barefoot and often butt naked, where everyone shouts from one room to the other to call for something. It’s a house where hugs are given freely as well as praise and “I love you”.

It’s also a universe where addicted rockstars come to detox with their movie star of a wife. Welcome unbuttoned shirts with hair on chest, miniskirts and open marriages.

In that house, you sing rock’n roll song or choir songs when you do chores to make it more enjoyable. You live in the moment and you don’t judge people.

This will be eye opening to Mary Jane.

She could have been rebuked or shocked, raised as she had been but instead, she latched onto the warmth, acceptance and love pouring out of this found family.

She will also patiently introduce home cooked meals, ironed shirts and alphabetized books to the house.

Sweet Mary Jane who will watch and quietly learn other ways of living.

Mary Jane was the epitome of caring and sweet. She felt like molasses to me. Something soft, sweet, pliant and comforting. Because Mary Jane, in her tranquil and dutiful way will offer comfort to all of the Cone’s house inhabitants.

She was the definition of a sweet heroine who proved that manners and care didn’t mean you had no backbone. No, in her soft and agreeable way, Mary Jane stood her ground and grew up that summer. She opened her eyes all while being grounded by her upbringing, taking what was probably the best of the two worlds.

I adored the “feel “of that story.

The mix of innocence and debauchery. The blend of purity and rock’n roll.

I think the seventies are perfectly featured into vivid details, from the hairdo to the cars and TV shows.

There are also plenty of sensitive topics from anti-Semitism, racism, addiction, sexuality …

That book made me:

-laugh: I laughed at Mary Jane’s “sex addiction” and at Izzy’s antics.

-sing: there were so many moments where Mary Jane and one of more of the family members sang that it seemed nearly like a musical! I wanted to join in on the fun.

-fear and rage: I feared for Jimmy and was so disappointed with him at the same time. By the way, Jessica did a splendid job explaining addiction and living with an addict.

-cry: I also cried when Mary Jane’s ruse was discovered and the fallout that ensued.

I breezed through that book and was just so sad when it ended. It’s one of my top 5 reads this year and certainly not my last book by that author!

Some favorite and telling quotes from the book:

“In the Cone family, there was no such thing as containment. Feelings were splattered around the household with the intensity of a spraying fire house. I was terrified of what I might witness or hear tonight. But along with that terror, my fondness for the Cones only grew. To feel something was to feel alive. And to feel alive was starting to feel like love.”

“I hadn’t understood that people you loved could do things you didn’t love. And, still, you could keep loving them.”