Alex is a class A Jerk! A complete egocentric and insufferable prick. And that’s me being polite here. 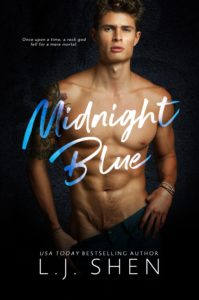 From bestselling author L.J. Shen, comes a new, standalone, contemporary romance.It should have been easy.
I needed the money. He needed a babysitter to keep him from snorting himself to death.
I was cherry-picked especially for him. Responsible. Optimistic. Warm. Innocent.
The worst part is that I should have known better.
Alex Winslow. British rock star. Serial heartbreaker. Casanova with whiskey eyes.
“Don’t get near the devil in a leather jacket. He’ll chew you up and spit you out.”
Guess what? I didn’t listen.
I signed the contract.
World tour. Three months. Four Continents. One hundred shows.
My name is Indigo Bellamy, and I sold my soul to a tattooed god.
Problem was, my soul wasn’t enough for Alex Winslow. He ended up taking my body, too.
Then he took my heart.
Then he took my all.

ARC received from the author in exchange for an honest opinion 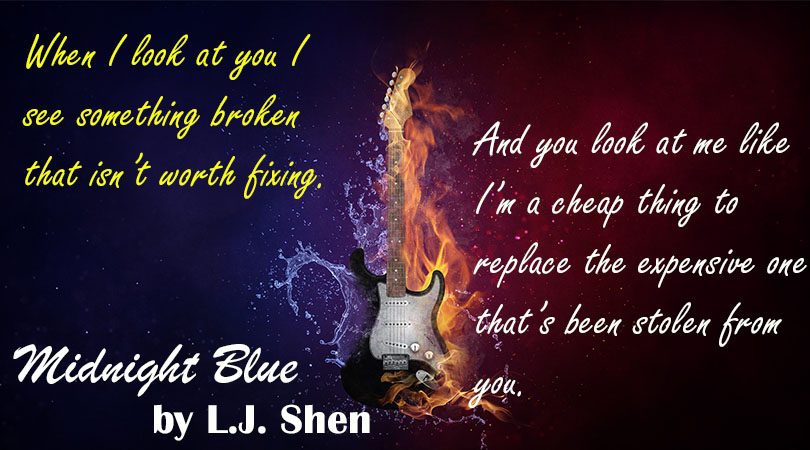 4,5 “blood pressure through the roof” stars

To get the plot out of the way (because it will be long overflow of rant and frustration and…): Alex is a Rockstar out of rehab that succeeded in sinking his former album and behaved VERY badly. He needs to make his next tour a success (read “not get cocked up, not trash motel rooms, no nude picks of his male parts yada, yada”) and produce a decent new album. Oh and I forgot: not chase his former girlfriend who shacked his best friend and left him in the dust.

What would his team do? Find him a babysitter shadowing his every move, even when he gets to the bathroom and ensure his nose stays clean and his liver pristine.

The babysitter is Indigo, small, very small, blue eyes, blue hair and vintage/thrift clothes. Broke too. Could she be more cliché? But stay tuned as she has many saving graces 😉.

Of course she knows he is bad news and can’t get attached to Alex. It would be foolish and she is a very grounded girl. The kind of girl that prefers her room’s solitude and sewing machine to crazy parties.

Alex won’t be happy he’s got a babysitter and in pure Alex’s fashion will intend to make her life a living hell. Only… the pixie has sass and spunk.

Now that I gave you pointers about the plot let me rant, get some steam out of my system and then rave (yes there will be raving).

Alex is a class A Jerk! A complete egocentric and insufferable prick. And that’s me being polite here.

I wanted to bash his skull so many times in the beginning it was not even funny.

I found him entitled, spoiled, obnoxious, egotist and many things.

Was he handsome? Well that’s what everyone thought so I guess he was hot but all his hotness was lost on me with his appalling behavior.

We really do have a story with the woman being the best part of him.

I don’t know what happened. Either I grew accustomed to his arrogance either he softened some thanks to Indie’s good influence either…. But he slowly grew on me and I was able to see behind the façade.

Alex had a very bad childhood and a horrid family. He despised “the Suits” aka the people managing him, his record company, the taxi driver, … everyone but his fans.

I really wanted to tell him to let them all lose if he could not bear the life he’s got. Brat!

Indie was the epitome of selflessness. She was saved from being insipid or a doormat thanks to her sass and banter. She gave as good as she got. When Alex was taunting Indie she answered right back and I loved it!

Their banter was like sexual foreplay and steam was not sparse in this story.

But where Leigh Shen excelled once more was making me slowly love the insufferable MC. Because everything is not as it seems with Alex.

Add to it some twists coming around 70-75% in the book just to throw the story on a loop, introduce more stress before maybe coming to full circle and you have a very happy reader.

I was prepared to love it and honestly I dreaded it. I love Leigh and was embarrassed to write a negative review but I should have trusted her better.

So do I recommend this book? Yes if you don’t mind having your blood pressure skyrocketing thanks to Alex’s @ssholeishness. Truly I was flummoxed!  Just don’t expect a smooth sail as you won’t get it. What you’ll get are loads and loads of feelings good and bad Leigh does not discriminate.

“When I look at you I see something broken that isn’t worth fixing. And you look at me like I’m a cheap thing to replace the expensive one that’s been stolen from you. See, we’re all vases. And you’re the one scattered on the floor, shattered beyond repair. So I’ll let someone else pick you up. It’s really that simple. Have fun with your temporary glue.”

I wanted to pump my fist and shout “Hata girl”!

Have you read it? Plan to read it?