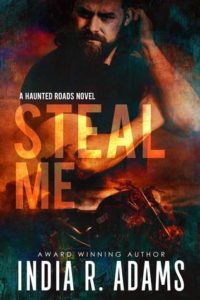 “Some relationships have hidden truths that few can survive. Only us strong ones can dare listen to, and have the balls to stay and bear witness to, the result of irrevocable damages. So tell me, Maverick, are you one of the strong?”Maverick, unfortunately, is well aware of Tucker’s meaning. Mav has recently lost his father, his mother is slipping into a depression, and his little sister is in desperate need of a parental figure. But now he’s losing his heart to Tucker’s mysterious sister, Delilah. As Maverick squints into the sun, looking at the beauty standing in front of the lake, he wonders if his heart is crazy for begging him to take on yet another tragedy.

Mixed feelings on this one!

I will go with a little story behind the story and my likes dislikes.

I promoted India’s books for the first time some months ago because the blurb presented by the PR company seemed intriguing and because the cover was a looker!
Let’s be honest here the cover of that book who was “Scar” had me wrapped around its little chapter!
You know me I am a goner for lovely things.

It got me interested in India’s books and I began following her yet I hadn’t read a single book she wrote.

I was lucky to win one of her books in a giveaway and asked that she choose for me.
Secretly I hoped she would send me Steal Me and she did!

Now that I have read it I am…confused and a little bit angry.

I won’t bore you out with the blurb you can read it above and will go to what I liked and disliked.

– Maverick and Bailey. It was probably the best part of the book. Witnessing this big brother being all protective of his five years old little sister just melted my heart! He was so caring and attentive!

– Something that had me swooning but that others will hate: the extreme sweetness of Maverick with Delilah. I was thinking “no way will a teenage boy be so caring, patient and mature.” But instead of rolling my eyes like many could/would I rolled with it, accepted and enjoyed the ride.

–The way India broached the topic of grief was spot on. Mav’s mother sank into depression after the death of her husband. She simply left the boat. Forgetting her kids. Not only leaving her little girl but also leaving her son to take care of everything.
And Maverick grieved in holding tight to his little sister. Making sure after his dad and his mom no other family member left him one way or another.

–The friendship. I loved that caring and rambunctious bunch of friends. When one hurt the others did too. When one needed his little sister to be looked after for a few hours to sort things out a friend always offered. Yet they were teenagers so they could have been occupied elsewhere with drinking or having fun!

–I hated how India chose to structure this story. We have Mav’s POV all along. Following his story with Delilah for years then…abrupt ending! Is it the end of his story? Is it a cliffy? That can’t be the end right?
Then we get Tucker’s POV. That would not have annoyed me if we picked up where we had been left and went on with the story. But no. We had to go to Tucker’s life back to when he was a kid and follow everything till the moment when we left Maverick!
What could have really worked as a second book to have Tucker’s story simply did not work at all for me here.
I simply was not invested in Tucker’s story at all.

–Other dislike we get a cliffy because “95000 words” it gets too big for one book!
Are you kidding?????
When you’ve just read my wish to have Tucker’s part in another book can you understand my frustration and anger at India’s parting words? But I guess that’s also a good point for the author as that means she had me sucked into Maverick’s story hence I am frustrated because I want to know the ending!

Let’s discuss! How do you or would you feel with such book’s structure? Yay or nay?