Chain of Gold is the first novel in a new trilogy that stars the Shadowhunters of Edwardian London.Welcome to Edwardian London, a time of electric lights and long shadows, the celebration of artistic beauty and the wild pursuit of pleasure, with demons waiting in the dark. For years there has been peace in the Shadowhunter world. James and Lucie Herondale, children of the famous Will and Tessa, have grown up in an idyll with their loving friends and family, listening to stories of good defeating evil and love conquering all. But everything changes when the Blackthorn and Carstairs families come to London…and so does a remorseless and inescapable plague.James Herondale longs for a great love, and thinks he has found it in the beautiful, mysterious Grace Blackthorn. Cordelia Carstairs is desperate to become a hero, save her family from ruin, and keep her secret love for James hidden. When disaster strikes the Shadowhunters, James, Cordelia and their friends are plunged into a wild adventure which will reveal dark and incredible powers, and the true cruel price of being a hero…and falling in love.

Once again, Cassandra Clare swept me off my feet and threw me in the Shadowhunter’s world. I emerged days after with a deep sense of satisfaction and a NEED to get the next book already. 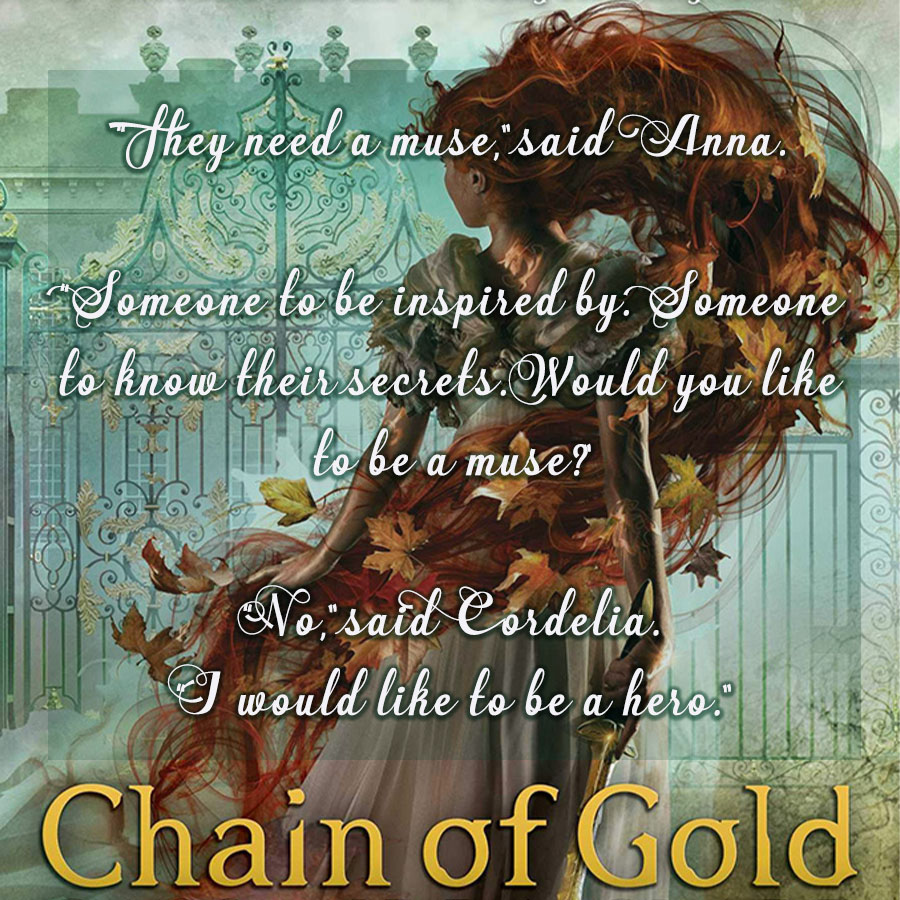 She pulled me in from the very first scene when Lucie, Will and Tessa’s daughter, was a small kid and became lost in the woods. There she meets “the boy” for the first time!

In just a few sentences about Lucie’s love for stories and her role playing in the woods, Cassandra already builds her character and sets the tone to the story. That’s a true gift for a writer!

What I love about Cassandra Clare’s book above all else is that she gives us incredible crews!

You don’t focus on one or two characters even if the love story makes it seem like you have two main characters. You have an amazing cast of interesting and diverse side characters! They are siblings, family or friends. They all mingle and interact building very interesting dynamics. Yes dynamics, plural.

The Merry Thieves and Lucie plus Cordelia by association are a tight knit bunch of friends!

James Herondale, Matthew Fairchild, Christopher and Thomas Lightwood. All have their own secrets or inner doubts but they would do anything for each other!

Here is how Matthew described them all:

“Please recall that I am the pale neurasthenic one and you are the stern heroic one”, Matthew said to James. “It is very tedious when you mix up our roles.”

“So what is my role?” said Christopher.

“Mad inventor, of course,”said Matthew promptly. “And Thomas is the one with a good heart.”

If I could add my own two cents, I would say that:

James is handsome and caring. He is the glue, always checking on every of his friends and he is their unofficial leader. I love James and something is happening to him in the book that makes me SO MAD! I want to slap a certain person really hard for what he is going through!

We also learn very surprising and alarming news about his ancestor. Poor James! He will really need all Cordelia’s help in the next instalment!

Last thing that I found very charming about James: he loves books so much that he has mastered the art of readwalking, just like I do! 😊

Matthew is the charmer of the bunch. But he also has a big secret weighting on his shoulders and we still don’t know what that terrible secret is! He is set on a path of self-destruction and I hope something will come by in the next book to alleviate his burden, forgive himself and live anew!

Thomas is like a giant teddy bear. He will discover some surprising aspects of his personality here and I confess that I have a deep fondness for his kind heart.

Last but not least as he’ll play a crucial role in saving the Shadowhunters from a huge danger: Christopher! He is like a very distracted scientist. Prone to cerate fires and explosions. Very clumsy too. He loves experimenting and improving the Shadowhunter’s weapons with sometimes very hazardous results!

Lucie is a very endearing character.

She loves creating stories and writes them for years for Cordelia.

With a vivid and romantic imagination, she is always perky and bubbly. A really uplifting character! Lucie also has a special ability that I won’t speak about here as I don’t want to spoil your fun. But that ability will be very handy when danger lurks in the corner!

And then, you have my favorite character: Cordelia Carstairs!

I love her so much that I made a custom funko looking like her on the book cover. 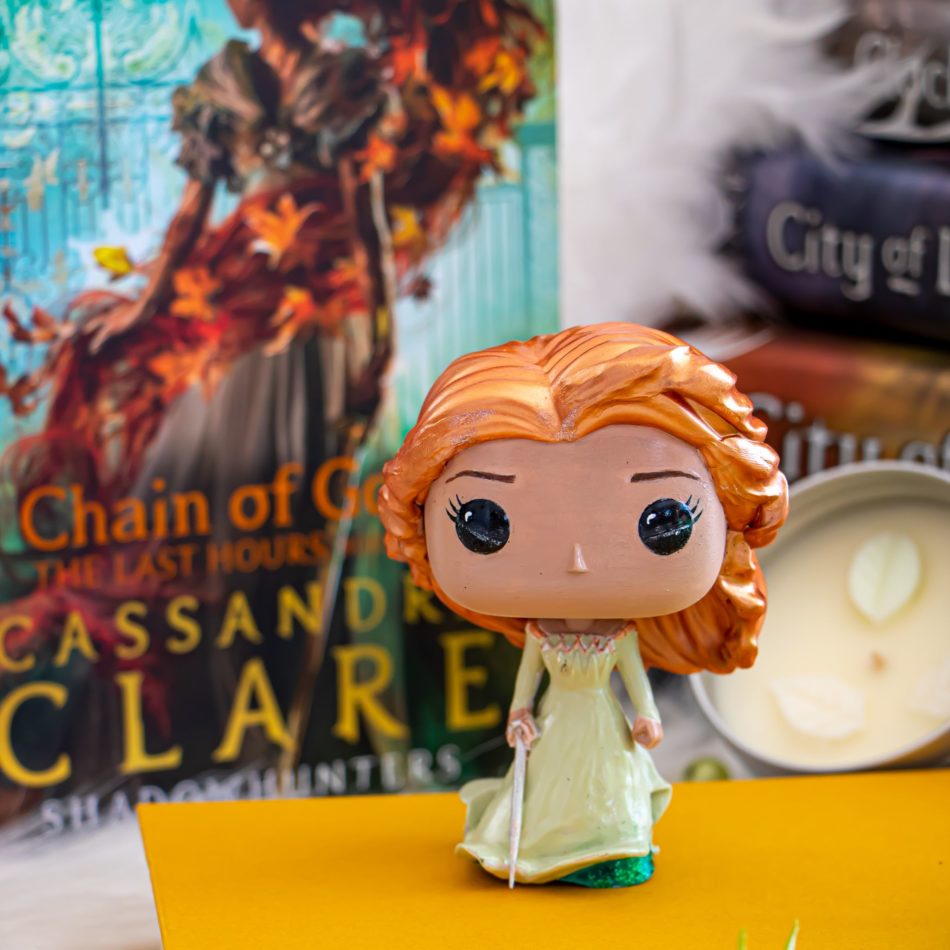 She reminded me of Emma Carstairs but without the recklessness and impulsivity.

Cordelia is smart and courageous!

They moved to London with her mother and her brother Alastair to plead her father’s cause as he is detained in prison in Idris after a catastrophic event.

Her mother would love for her to find a good suitor to protect Cordelia and reinstate the Carstair’s name. But Cordelia is proud and has witt!

I really loved how she did not bow nor let circumstances abate her. She always was determined to stand on her own two feet and be respected. She was so resilient!

At one point, there is a scene where I could have shaken James as he left Cordelia in a tight spot. Did she cry? Oh no!

“You look ill, Matthew observed. “Is it my dancing? Is it me personally?”
Cordelia drew herself up. She was Corselia Carstairs, daughter of Elias and Sona, one of a long line of Shadowhunters. She was the inheritor of the famous sword Cortana, which had been passed down the Carstairs family for generations. She was in London to save her father. She would not fall apart in public.

See what I mean? She has a backbone of steel yet she is loyal to a fault and so selfless! She would go through fire to save her friends and family.

She is not reckless but she is fearless.

“They need a muse,” said Anna. “Someone to be inspired by. Someone to know their secrets. Would you like to be a muse?”

Of mixed heritage, Indian by her mother and British by her father, Cordelia has hair the color of dark bronze, like fallen leaves and black eyes all that paired with a skin of a dark and rich shade.

For years she’s been in love with James but …. Of course, this being a Cassandra Clare’s story, no love story can be easy! And all love stories, because you have more than one in this book, are complicated!

As far as siblings are concerned, Cordelia and Alastair have a complex relationship. Alastair is not someone you’ll like in the beginning. But learning what happened at the academy, seeing his past summers with his sister and the stands he’ll take in this story redeemed himself.

Last but not least, you have all the other side characters like Magnus Bane even if, so far , he barely has a cameo, Will and Tessa (I loved seeing their married life and how great parents they were).  Anna Lightwood is one of the most interesting side characters! She is our amazon. Never bothered by what people will think of her. Living an independent life and breaking so many female hearts. Dressed in pants and shirt. Smoking cigars, just like men.

And that’s without mentioning Jem!

All my favorite characters in one book. Well rather one series as we are left on a cliffy!

Add to this fantastic character cast a villain in hiding, a curse and a quest to vanquish said villain.

Action is forever present, as well as plenty of heroics.

Sugar on top, as you could see in some of the quotes I used, the banter and witty remarks are aplenty. It makes the story flow effortlessly thanks to wonderful dialogs between the protagonists. Never a dull moment!

My only complaint? I have to wait months for the sequel!

Have you read it already? Do you plan to?