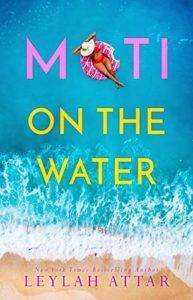 A Greek family. An Indian family. A summer wedding on the Aegean coast…

Saddled with an eccentric mother, she stumbles upon the one man who holds the key to her freedom—the best man at her cousin’s upcoming wedding.

All Moti has to do is overcome her fear of water, board a yacht to the Greek Isles, seduce the dreamy Nikos Manolas, and survive two weeks at sea with her oddball family.

The only obstacle Moti doesn’t see coming is Alexandros Veronis, the onboard chef and star witness to her awkward mishaps. He transforms onions into chocolate and aroma into nostalgia. Day by day, his alchemy works its magic on Moti. But she’s not the only one falling under his spell. Everyone has a secret, growing round and ripe at Chef Alex’s table. When the masks fall off, they spill out one by one, and everything blows up in their faces.

Now Moti’s truth is exposed, and worse, she’s hooked on more than Alex’s midnight snacks. But this time, screwing up could be the best thing she’s ever done…

WARNING: I loved Moti so much that I just HAD to INTERVIEW Leylah on the “making of” so be prepared to have her interview “hurled” at you tomorrow 😀

WARNING BIS: I highlighted so many quotes and passages that my kindle could have been used as glowing bilboard for the book. Blindness from my fellow commuters may or may not have ensued. I claim no responsibility in any damages …they should just have not peeked over my shoulder to read MY book! Even if I was laughing like a maniac on the train ….

“When you’ve been looked over your whole life, it’s startling to find yourself in someone’s eyes, to be held in their vision, the same way they hold sunsets and beautiful things.”

THIRD WARNING (already??? How did we come to this? I blame you Leylah!) reading this book and laughing hard while walking fast on the threadmill is a VERY BAD IDEA! Or a very good one as your abs will work twice as hard to laugh and help keep your balance in the hope of avoiding a “Moti Moment”.

I have never given more than 5 stars for what could be seen as romcom so far but Moti is in a category of its own!

I am a huge fan of Leylah Attar’s books and said for Mists of the Serengeti that it should be made into a movie as it was “grand and epic” well I am saying it here again but for totally different reasons: this book is the perfect candidate to become a movie!

Let’s rewind here and explain what the story is and why I loved it so much that it will be on my list of “Bests of  2019”.

Moti (pronounce with a soft T like “th”) is a young Indian woman.

She lives with her mother Dolly as her father left her when she was two years old.

Moti works for Joseph Uncle and at the beginning of the story she is at a dinner rehearsal for her cousin Isabel’s wedding. The only problem is that Moti is prone to accident or rather “incident” and it will have her fired as the maid of honor.

Pause: that scene with Moti choking on her food and then falling backward, below the dais being stuck with her legs at an angle impossible for her to stand up discreetly already had me laughing so hard that I nearly peed my pants. And that was only the beginning.

Resume: Moti’s fate has been foretold by an old Indian woman and she has to marry a three thumbs man who will be her true love or her mom will die. Moti is also predicted to die drowning and her mom, Dolly, has always forbidden her to swim or enter any kind of pool.

Yet Isabel’s wedding will happen in Greece, on an island, after a two weeks cruise with her family, Moti included. As Moti has met Nikos, the best man who happens to possess three thumbs she will embark with a plan to seduce her future husband.

But what Moti did not plan for was chef Alexandros!

Pause again: Alexandros must be a wizard undercover! Everyone seems to fall under his spell. Glazed eyes, reliving his youth or becoming bold and confessing some big secret every passenger is enthralled by the food.

Alexandros is not only a magician in the kitchen he is handsome and considerate. He saw things other people never saw. You want to bask in that guy’s attention.

Will Moti choose Nikos and finally make her mother happy or will she fall for the hot chef?

I loved Moti and I adored the writing in this book!

Moti has always been overlooked and is taking care of everyone around her. She was used to walking on eggshell around everyone. She’s wanted to please her mother for as long as she can remember. And what a mother!

Every character in this book has quirks and some brand of crazy.

“If you looked at a family closely enough, you’d see that everyone had a job. There were Bosser-Arounders and Bossed-Arounders. War Makers and Bread Bakers. Promise Keepers and Promise Breakers. When you did something enough times, you got a label so everyone else knew what to expect.”

“Labels made life easier for everyone. I was all about labels and mine read ‘Mother Minder’, meaning I had to mind my mother, Dolly, at family get-togethers. You see, Dolly liked to play dead. Usually at the most inopportune times.”

Do you see how with some well thought out words Leylah delivers a big truth about families and gives you the core of Moti’s role in it?

Moti is a unique story.

You’d want to categorize it under romantic comedy for all the laughter but it is more than that. That book is filled with wisdom about family relationship, marriage advices, people dynamic …

Leylah Attar has a sharp mind and a hawk eye, dissecting every habit, every quirk, every myth to expose deep thoughts wrapped up in irresistible humor.

I also learned plenty of useful things in this book like how to ogle hot guys discreetly!

“I put on my sunglasses, because that’s the polite way to ogle hot people.”

I think the best quote to represent this book is this one because that’s how I felt too while reading this story:

“Alex’s cooking was doing things to me. Strange, weird things. All my yearnings and burnings were eating and growing and taking form. His food was giving flesh to my feelings.”

Have you read Leylah’s books? Do you like romcom? Any exceptional to recommend me?