I love that meme as it takes little time to do (I’m always running like the real busy bee I am) AND I get to promote a book I really loved. This is the perfect idea for me! If you want to play, feel free but don’t forget to tag Megan’s blog.

My first Standalone Sunday will be about Transcendence by Shay Savage .I loved every thing about this book. I thought the idea was brilliant and I fell in love with its hero Ehd (I know one of my friends “P” called dibbs but hey, I read it first!). It was just magic 😀 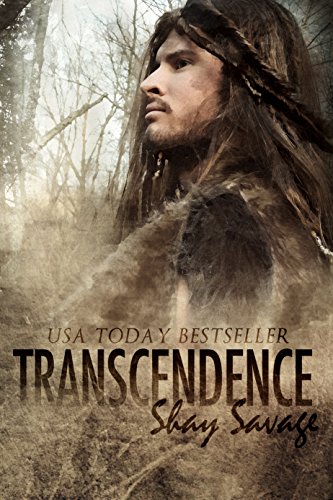 It’s said that women and men are from two different planets when it comes to communication, but how can they overcome the obstacles of prehistoric times when one of them simply doesn’t have the ability to comprehend language?

Ehd’s a caveman living on his own in a harsh wilderness. He’s strong and intelligent, but completely alone. When he finds a beautiful young woman in his pit trap, it’s obvious to him that she is meant to be his mate. He doesn’t know where she came from; she’s wearing some pretty odd clothing, and she makes a lot of noises with her mouth that give him a headache. Still, he’s determined to fulfill his purpose in life – provide for her, protect her, and put a baby in her.

Elizabeth doesn’t know where she is or exactly how she got there. She’s confused and distressed by her predicament, and there’s a caveman hauling her back to his cavehome. She’s not at all interested in Ehd’s primitive advances, and she just can’t seem to get him to listen. No matter what she tries, getting her point across to this primitive, but beautiful, man is a constant – and often hilarious – struggle.

With only each other for company, they must rely on one another to fight the dangers of the wild and prepare for the winter months. As they struggle to coexist, theirs becomes a love story that transcends language and time.


This is so beautiful and unexpected. It was a really touching as well as unusual story . I loved Ehd! He is a “savage” but he is so sweet and considerate with Elizabeth. He is like a kid at times, cowering and cringing after he did something to upset her, he didn’t dare to look at her, pretending not to exist…

And he really, really broke my heart when he thought she didn’t want to be his mate. He would be alone and lonely again. But even so, he wanted to give her fresh fish to feed her and help her leave him to find her “tribe”. Gosh, I had to grip my tissue and retain my sobs!

And all along without knowing what Elizabeth thinks or says(she is “making noises”), except at the end. We see all through Ehd’s eyes and experience all his thoughts.

At the beginning, he feels so lonely and desperate, he nearly does not want to live any more. And then, he finds Beth! She is his hope and brings him a surge of happiness. He’s found his mate! From that moment on all he really wants is to take care of her, protect his mate and “put a baby in her belly” (it made me smile with his refreshing way of speaking of his desire and his need). But it’s not an easy journey, he’ll have to earn her trust. She is so frightened and he is at loss. Ehd doesn’t know how to stop her tears who break his heart. He’s been cut from other humans for so long he has no one to guide him. Ehd will have to overcome the “non” language barrier and will make mistakes but he is always driven by the need to protect, cherish and help his mate.
Let me say, this “Neanderthal” is much better than many of our contemporary males!
And the end was so tender I had to fight my tears but it was a lost battle(again)!
Truly gorgeous!