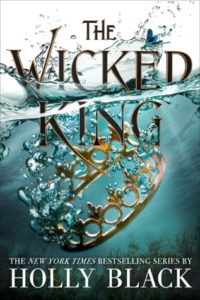 After the jaw-dropping revelation that Oak is the heir to Faerie, Jude must keep her younger brother safe. To do so, she has bound the wicked king, Cardan, to her, and made herself the power behind the throne. Navigating the constantly shifting political alliances of Faerie would be difficult enough if Cardan were easy to control. But he does everything in his power to humiliate and undermine her even as his fascination with her remains undiminished.

When it becomes all too clear that someone close to Jude means to betray her, threatening her own life and the lives of everyone she loves, Jude must uncover the traitor and fight her own complicated feelings for Cardan to maintain control as a mortal in a Faerie world.

Oh and the ball keep rolling by the end of the book because Cardan pulled the rug under Jude’s feet!

I so loved it!!! It is a more than 5 stars because  Holly Black is si skilled at navigating us through faerieland that I suspect she must come from it!

First The Wicked King was my most awaited book of 2019.
I tried to get the ARC pleading at every door for months but unlucky for me I am an international blogger and too small a fish to be interesting to publishers.

Anyway I got it and squealed when it landed in my hands!

I came to the conclusion that Cardan and Jude are very similar!
Both felt powerless as kids. Afraid. Both wanted power. Jude was not the only one who had been tormented as we learn more about Cardan’s childhood.
That’s why Cardan was cruel to other faeries because he could. Then would he feel some power.
And that’s why Jude trained to become a knight. To stop feeling defenseless and to have a place on her own.

Power is at the center of everything in Faerie and now that Jude has a whiff of it the temptation is great to hold on to!

“And now that I have found myself a taste of power, will I be loath to give up?”

They love hating each other. It’s become a game. A well-practiced dance. Or rather they hate loving each other. Because that’s what I feel is happening! 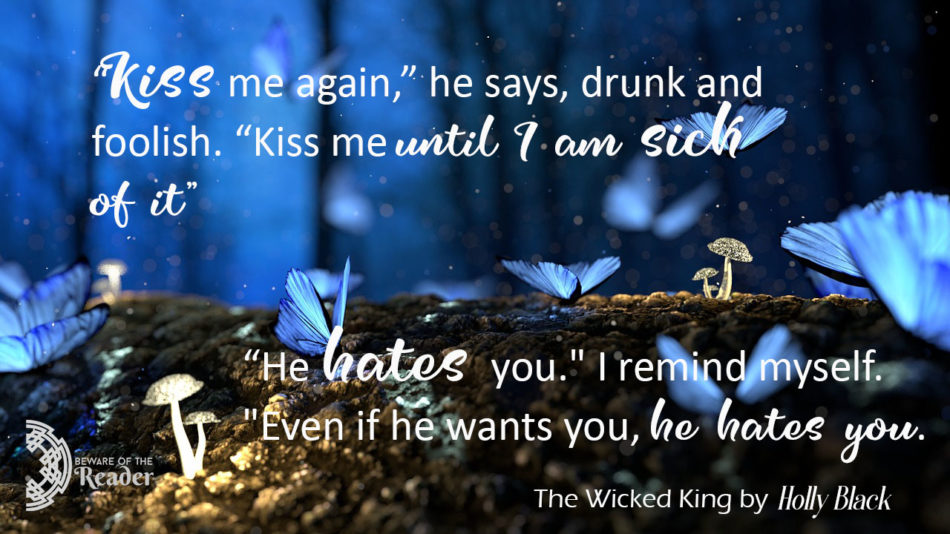 “Kiss me again,” he says, drunk and foolish. “Kiss me until I am sick of it”

Maybe he hates you the more for it.”

I began the book telling that I really hoped Cardan would stop being shallow and fickle. That I wanted his shoulders to broaden and be a king. That I wanted him to impress me.
Well that’s Holly Black who impressed me as she played me for a fool! She blurred the lines, sent me one way, blinding me with plot twists when all along she was working on Cardan!
I didn’t see it coming!!!

Add to all this that Jude had her plate full of scheming to unravel, betrayals to recover from, death to escape jumping tree to tree and she had to micromanage Cardan!
Jude really impressed me. She has a will of iron and survival skills honed to perfection. Cut her and she will sew her wounds herself. Put her down she will rise again and again.
Smart, skilled murderer, loyal to her family…I would never survive one day in Faery while she managed to thrive!

To sum it up: the plot is brilliant and twisted, the characters in all shades of grey and I loved it!

Now the torture begins as I’ll be waiting for the last book! If you happen to get an ARC and wants to make a girl happy… just saying LOL. Have you read it? Do you like morally grey characters.