Sorry I have been MIA these last 24 hours but I am busy reading Warstorm by Victoria Aveyard and I’m on a deadline! My next ARC is coming this Friday so I must be finished in two days while I am running like mad for work and for the kids!!!!!

Anyway today is Top 5 Tuesday hosted by Shanah @bionicbookworm and the topic might be one of the most difficults for me: science fiction!

I don’t read many science fiction books really and I know they can be without “aliens” but then that’s where my knowledge ends between science fiction/dystopian/….and aliens!

So let’s just say that I consider science fiction books with either aliens, either spaceships.

Feel free to disagree and enlighten me on the intricacies of the genre I love learning new things!

I can’t promise I’ll remember all if you go into lenghty details though as my brain is fried today after a very long work day!

OK let’s go with my definition of science fiction shall we?

Book with aliens that I loved: The Host by Stephenie Meyer (YA) 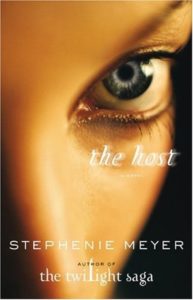 I cried buckets and found it way much better than Twilight (and I’m not ashamed to say that I loved Twilight!

Melanie Stryder refuses to fade away. The earth has been invaded by a species that take over the minds of human hosts while leaving their bodies intact. Wanderer, the invading “soul” who has been given Melanie’s body, didn’t expect to find its former tenant refusing to relinquish possession of her mind.

As Melanie fills Wanderer’s thoughts with visions of Jared, a human who still lives in hiding, Wanderer begins to yearn for a man she’s never met. Reluctant allies, Wanderer and Melanie set off to search for the man they both love. 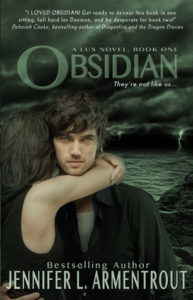 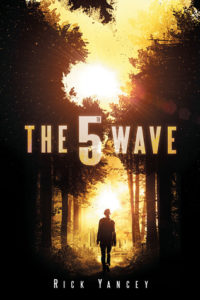 The 5th Wave by Rick Yancey (loved the first two books and still want to bash the author’s skull for the third one!)

Now, it’s the dawn of the 5th wave, and on a lonely stretch of highway, Cassie runs from Them. The beings who only look human, who roam the countryside killing anyone they see. Who have scattered Earth’s last survivors. To stay alone is to stay alive, Cassie believes, until she meets Evan Walker. Beguiling and mysterious, Evan Walker may be Cassie’s only hope for rescuing her brother-or even saving herself. But Cassie must choose: between trust and despair, between defiance and surrender, between life and death. To give up or to get up.

Scoop! My kids enlightened me just five minutes ago and I don’t need spaceships or aliens to have science fiction!

When they read what I was typing they really looked like THIS….

Just the use of a very advanced technology in a future world is enough. What would I do without my kids right?

So here are some more sans aliens nor spaceships nor (nearly) destroyed world (because that would be apocalypse or dystopian…..Gah! These genres and sub genres are so complicated!!!) 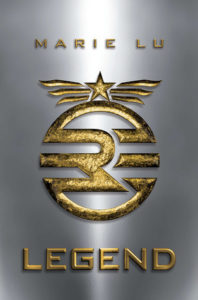 What was once the western United States is now home to the Republic, a nation perpetually at war with its neighbors. Born into an elite family in one of the Republic’s wealthiest districts, fifteen-year-old June is a prodigy being groomed for success in the Republic’s highest military circles. Born into the slums, fifteen-year-old Day is the country’s most wanted criminal. But his motives may not be as malicious as they seem.

From very different worlds, June and Day have no reason to cross paths—until the day June’s brother, Metias, is murdered and Day becomes the prime suspect. Caught in the ultimate game of cat and mouse, Day is in a race for his family’s survival, while June seeks to avenge Metias’s death. But in a shocking turn of events, the two uncover the truth of what has really brought them together, and the sinister lengths their country will go to keep its secrets. 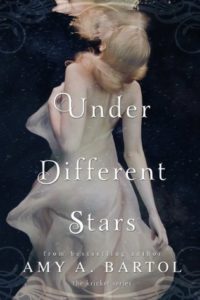 Kricket Hollowell is normally not one to wish upon stars; she believes they’re rarely in her favor. Well versed at dodging caseworkers from Chicago’s foster care system, the past few years on her own have made Kricket an expert at the art of survival and blending in. With her 18th birthday fast approaching, she dreams of the day when she can stop running and find what her heart needs most: a home.

Trey Allairis hates Earth and doubts that anyone from his world can thrive here. What he’s learning of Kricket and her existence away from her true home only confirms his theory. But, when he and Kricket lie together under the stars of Ethar, counting them all may be easier than letting her go.

Kyon Ensin’s secrets number the stars; he knows more about Kricket’s gifts than anyone and plans to possess her because of them. He also knows she’s more valuable than any fire in the night sky. He’ll move the heavens and align them all in order to make her his own.

When everything in their world can be broken, will Kricket rely upon love to save her under different stars?

Now a bonus! I haven’t read this one but my son was adamant that I put it on my list because:

“That’s the best book ever mom! You never guess what will happen! One character can die the next page and you never know!!!! It was a roller coaster!” 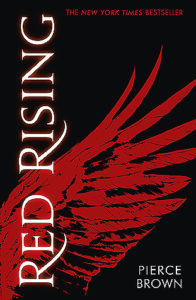 “I live for the dream that my children will be born free,” she says. “That they will be what they like. That they will own the land their father gave them.”

Eo kisses my cheek. “Then you must live for more.”

Darrow is a Red, a member of the lowest caste in the color-coded society of the future. Like his fellow Reds, he works all day, believing that he and his people are making the surface of Mars livable for future generations.

Yet he spends his life willingly, knowing that his blood and sweat will one day result in a better world for his children.

But Darrow and his kind have been betrayed. Soon he discovers that humanity already reached the surface generations ago. Vast cities and sprawling parks spread across the planet. Darrow—and Reds like him—are nothing more than slaves to a decadent ruling class.

Inspired by a longing for justice, and driven by the memory of lost love, Darrow sacrifices everything to infiltrate the legendary Institute, a proving ground for the dominant Gold caste, where the next generation of humanity’s overlords struggle for power. He will be forced to compete for his life and the very future of civilization against the best and most brutal of Society’s ruling class. There, he will stop at nothing to bring down his enemies… even if it means he has to become one of them to do so.

I dedicate this Top 5 Tuesday to my kids who saved the day! I must have done somthing good as a mom seeing how they love to read (even if they love to throw back insults and punch doors too….but hey, nobody’s perfect right?)

What are your top 5 science fiction books?