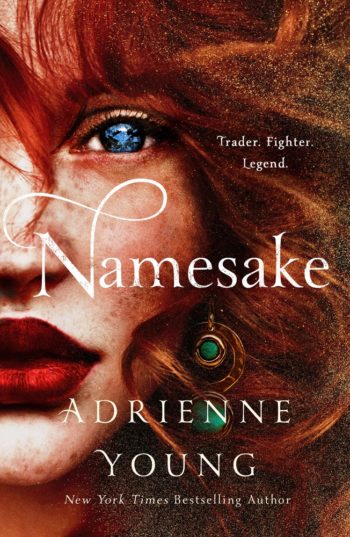 Welcome to a world made dangerous by the sea and by those who wish to profit from it. Where a young girl must find her place and her family while trying to survive in a world built for men.With the Marigold ship free of her father, Fable and the rest of the crew were set to start over. That freedom is short-lived when Fable becomes a pawn in a notorious thug’s scheme. In order to get to her intended destination, she must help him to secure a partnership with Holland, a powerful gem trader who is more than she seems.

As Fable descends deeper into a world of betrayal and deception, she learns that the secrets her mother took to her grave are now putting the people Fable cares about in danger. If Fable is going to save them, then she must risk everything—including the boy she loves and the home she has finally found.

“We were salt and sand and sea and storm.”

That story reads itself.

I had guessed one of the big secrets from book two so I wasn’t that surprised but the scheming of some characters still surprised me and kept the plot very interesting.

Fable is still the strong and stubborn girl we got to know in the first book and yet there is a softer edge to her. Probably because she let herself love West and form friendship with the crew of the Marigold.

They became her found family, her beacon and she will do everything to protect them as well as …other people (no spoiler).

But when you love, others have a leverage on you and can make you do things just to ensure the safety of your beloved ones.

That’s how Fable will find herself entangled in a web of betrayals, scheming and deceptions.

I still loved the part the sea is playing in this story even if it’s somewhat less present. The dredger’s work is fascinating and I was holding my breath when Adrienne described their diving!

That sequel also reconciled me with some characters that infuriated me in the first book! I’d say that things are finally as they should be. Cryptic I know but I don’t want to spoil your fun.

Well, I think that I wanted to know more about Isobel. She left many secrets and we will never know them, know her reason for leaving Bastian. I would also have loved knowing more about her romance with Saint. I guess I am still a little bit hungry for more adventure and romance!