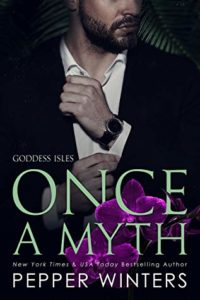 “There was a boy once. A boy who wasn’t strong enough to save me when I was taken.”
“There was a girl once. A girl called Tess Snow who sat with me in the dark waiting to be sold.”
“There was an owner once. An owner who bought me, entrapped me, and made me his unwilling goddess.”Eleanor Grace is a naïve dreamer. Trusting and young, she believes her book-loving boyfriend can save her when her freedom is snatched and sold. Squirreled away to an island at midnight, delivered to a man even darkness won’t touch, she’s bound by a contract.Five men.
Five fantasies.
Five pieces of her soul.Sullivan Sinclair is the giver of fantasies. Any wish, any desire—he is the master at quenching even the filthiest appetites. His private paradise and perfectly trained goddesses are there for one purpose: to ensure every guest is extremely well satisfied.

He bought her.
He trapped her.
She belongs to him.

4,5 “What has Pepper turned me into” stars

“There was something…something ruthless and savage about him. Something instinctual that sensed predator from prey and firmly put him in the category of dangerous. But beneath that savage suaveness, something smoothed the merciless edges, granting a strange kind of enigma. Cold and hot. Immune and unprotected. He wasn’t as invincible as he appeared.”

Ladies and gents, fasten your seatbelt and invest in lots of spare pairs of panties!

As there are major twists and turns in this story AND I promised to write a spoiler free review, I will stay relatively vague about the plot. But I will delve deeper into the feelings and thoughts I got from this story!

The plot in a nutshell is a story of abduction. A woman, Eleanor, will be abducted right under the nose of her boyfriend by slave traffickers and sold to Sullivan. As the synopsis states, Sullivan owns an isle populated by women he bought and remade into sexual slaves: his goddesses. Not for his own pleasure but for that of guests.

But there is a twist as he sells more than “just” girls. I won’t explain here but Pepper added a special layer with scientific developments. Something that I didn’t know if it made the women’s fate better …or worse.

Because everything is a question of perspective!

Let’s be clear here: I, of course, know that it’s morally wrong to kidnap women to keep them as sexual slaves! But sometimes, their fate on the island seemed not as bad as you could think.

And that’s what Pepper Winters did here: turning something that is inherently wrong, appalling to its core into a story layered with nuances. You will question your own morals. You will wonder why you keep reading and just not shut the book and shout everywhere that it’s disgusting! In fact, you will be trapped. Ensnared in that story the same way the paradisiac island lulled people into a false sense of paradise.

From the start I rooted for Eleanor. She was brave, determined and very, very in control. She had her emotion on a tight leash, trying to be smart and find a way to escape her captivity. But she was far from unfeeling. Quite the opposite in fact. When you push your feelings down and down and down …one moment or another they will erupt like lava from a volcano!

And of course, there will be consequences …

Sullivan …should be hated and despised.

After all, he has more than grey morale for what he is doing to these women. In a sick and twisted way, he even considers that he is being benevolent and helping them. Yet he worships animal life. Sully is a paradox. The surface has barely been scratched here and I just feel deep in my guts that there is much more to know about him that will explain all his complex personality.

He also is in total control, repressing a savagery that you have rarely read about! By the end of book one, I won’t say that I love him but certainly that I am intrigued by his enigmatic personality. He is one of the bests anto heroes that I have read so far!

Eleanor and Sullivan will clash in epic proportion and be warned that you’ll have very brutal scenes. If you can’t stand stories with sexual slavery, abuse and more, please pass your way you won’t like this!!!

But for all the brutality, the sex scenes, the abuse, the “amoral” characters, Pepper succeeded in writing a story where nothing is black or white, but in all shades of grey with a permanent stress and off the charts sexual tension.

I dare say that Tears of Tess, one of my favorites from Pepper Winters, feels nearly like child play compared to Goddess Isles’s series.

Once a Myth is not for the faint of hearts and has huge triggers. It’s a twisted, complex and so potent story that you won’t be able to stop reading. #iamaddicted

And of course, we are left on a huge cliffy so now I need the sequel!

Have you read Pepper Winters books yet?