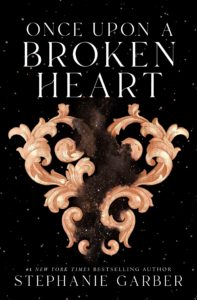 From Stephanie Garber, the #1 New York Times bestselling author of Caraval, Once Upon a Broken Heart is the first book in a new series about love, curses, and the lengths that people will go to for happily ever after.Evangeline Fox was raised in her beloved father’s curiosity shop, where she grew up on legends about immortals, like the tragic Prince of Hearts. She knows his powers are mythic, his kiss is worth dying for, and that bargains with him rarely end well.

But when Evangeline learns that the love of her life is about to marry another, she becomes desperate enough to offer the Prince of Hearts whatever he wants in exchange for his help to stop the wedding. The prince only asks for three kisses. But after Evangeline’s first promised kiss, she learns that the Prince of Hearts wants far more from her than she’s pledged. And he has plans for Evangeline that will either end in the greatest happily ever after, or the most exquisite tragedy…

I was so happy when Hodder and Stoughton approved my request for an eGalley! I have binge read Caraval this year and couldn’t wait to read this one!

As usual, even if I got an ARC, it doesn’t affect my honest review.

My first thoughts are that this story is so beautiful, candid, poetic. I feel like a little girl listening to fairytales before bed, with stars in my eyes. Enchanting!

But the light and merry world filled with tiny dragons and beautiful dresses will morph slowly into a worrisome universe where hidden players have secret agenda and don’t hesitate to curse and kill to further them.

You don’t have the magic of Caraval but it had a fairytale and enchanting feel to it that I loved as much!

Let’s backtrack and get onto the story.

You know from the synopsis that Evangeline, our heroine, will make a deal with Jacks to stop the wedding of the boy she loves: Luc.

But of course, we learned in Caraval that bargains with fates are not without fallout!

Jacks has a price and he will collect when the time is right.

I don’t want to spoil your fun but some weeks after their encounter, Evangeline will be sent to the kingdom of the North by Scarlett, now empress.

The prince of the North, Appollo, is holding a royal event where girls will compete in the hope of becoming his bride.

On her way to the north, Angeline will travel with her stepsister Marisol.

I will stop here with the plot, just know that once in the North, Evangeline will go through very dramatic events and we will never know if Jacks was her enemy or became her friend. He has a hidden agenda, that’s for sure!

Now, about the main characters…

I loved Evangeline, with her rose gold hair.

Some will find her naïve maybe but I thought she was very courageous and a firm believer of HEA.

“This was one of the reasons she’d drunk the poison that had turned her to stone. It wasn’t because she was fearless or terribly heroic; it was because Evangeline simply had more hope than most.”

I think it takes courage to remain hopeful, to believe that something good is waiting for you rather than succumb to cynicism and abandon hope.

“Evangeline had always had a weakness for hoping in things others thought impossible.”

“She knew her story had the potential for infinite endings—and that belief hadn’t changed. There was a happy ending waiting for her.”

She chased her true love, wanted something like her parents. And she felt so alone since both died.

“She just wanted someone to want her the way Jacks had wanted this girl. And she didn’t want it to be because of a spell or a curse. Evangeline wanted a real love powerful enough to break a spell.”

Evangeline is brave, loves discovering new worlds and she is also selfless. She couldn’t stand the idea of people paying the price of her error.

Of course, you also have Jacks!

If there was ever a gray character, it’s Jacks!

He is nor good nor evil. Like Evangeline, I wanted to believe he could be her friend, he could act from kindness and then he would do something to make me doubt. Was he truly only acting in his own interest or did he want to truly help Evangeline?

I think it’s a little bit of both and it’s just perfect!

Last but not least asset of that story: it has an enchanting world.

I knew from Caraval that Stephanie Garber had a fantastic imagination and great skills at building world. She did it again with Once Upon a Broken Heart.

“Marisol, look, tiny dragons!” “Oh my—” Marisol went pale as a robust pop sounded and a tiny pepper-black dragon about the size of a chipmunk shot out streams of red fire to sear a fish stick at a nearby stall. On the docks, the adorable little beasts appeared to be as common as squirrels.”

If there is one thing I would change, it’s the ending! Because of course it ends on a cliffhanger and we don’t have the sequel yet!