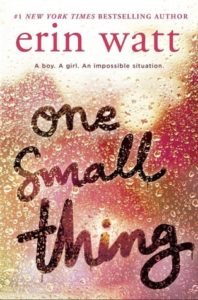 Beth’s life hasn’t been the same since her sister died. Her parents try to lock her down, believing they can keep her safe by monitoring her every move. When Beth sneaks out to a party one night and meets the new guy in town, Chase, she’s thrilled to make a secret friend. It seems a small thing, just for her.Only Beth doesn’t know how big her secret really is…Fresh out of juvie and determined to start his life over, Chase has demons to face and much to atone for, including his part in the night Beth’s sister died. Beth, who has more reason than anyone to despise him, is willing to give him a second chance. A forbidden romance is the last thing either of them planned for senior year, but the more time they spend together, the deeper their feelings get.Now Beth has a choice to make—follow the rules, or risk tearing everything apart…again.

Statement: I love Erin Watt’s The Royals series and When it’s Real.
I love Jen Frederick’s work as well as Elle Kennedy’s series.

When I spotted the ARC of One Small Thing I sent a request and crossed my fingers. Real tight. It was painful and unpractical.

When I got it I squealed! So hard the neigbors believed some cats were fighting. Nope. That was me!

I dove right in but sadly this book was not for me.

I think one part of my disappointment is due to the ARC format with small inconsistencies and lack of transition once or twice left in this format. I am used to beta read and I have an eagle eye to spot these while most people would miss them. But that’s what beta readers than later editors are for and I am certain all will be formatted for the release.

So let’s just forget this remark and speak about what prevented me to give a 4 or 5 stars.

My main problem was that I was MAD at Beth’s parents AL THE TIME! And I was mad at her best friend Rebecca AND at the whole school. Heck make it the whole town!

I could not really believe a whole town and school would behave like that! No one in that school ever considered giving Chase a chance after he paid his due for three years in juvie. He was not a serial killer! Ok he killed someone but he never intended to it was an accident and it is a huge difference.
And he paid his due!

Now based on Erin Watt’s interview (the one made with Andelica from Collector of Book Boyfriends and that will be published on our respective blogs) I know they struggled the most with Beth parents. So they willed them to be irreasonable, overprotective, smoldering and vengeful because that was their way to grieve!
In this it is a huge success!
But it had me a boiling cauldron of anger, outrage and disbelief all the time!

Beth also had a huge way to grow.

She had an erratic behavior going from temper tantrum, reckless behavior to maturing thanks to Chase. Her not standing up and claiming Chase bothered me too. He had to be her dirty secret. But the second after I felt bad because she was grieving and who’s to say how to grieve? There is no handguide!
And would have I dared stand up for Chase in her shoes? From personal experience in high school I can say yes. I stood up for bullied and rejected people against the powerful bullies of the school. But most people wouldn’t. That’s a fact. And so her behavior was not exceptional and I had to be more understanding.
Yet I was ANGRY once again.

And I wanted to kick some behind!

Even Chase did not escape my wrath.
He was a noble soul and admirable.
BUT

He still wanted to be punished for what he’s done hence forbade himself to be with Beth. And was so understanding that he accepted that others wanted to bully and shun him.
Now if others would attack Beth then he would draw the line as he was far from a coward! Only remorseful and trapped in his guilt.

What has been masterfully stated in this book is that grief can alter people on a deep level. It can morph a jokester dad into a jailer. Never smiling. Suffocating you for your own good. A loving mom can lash on you. She can help her husband to keep you a prisoner. Both idolatring their dead daughter. Seeing her like a Saint.

It’s also established that villain can wear bright and charming colors manipulating everyone.

To make it short: anger was festering through my soul throughout my read. I was in the same emotional state these people were. Just not mad at Chase but at them!

That’s why I ended giving this book a 2,5 stars derived from my utter frustrated frame of mind.

Will I keep reading Erin Watt’s books?
Without a doubt as I know first hand that they write fantastic stories and have proven their talent many times.
It is perfectly normal not to love every single book as reading is a personal experience.

I would like to pay homage to their PR Nina Bocci.
When I realized I would give a low rating I was embarassed. I promised to never lie about a book being ARC or not . I contacted Nina to ask her what she’d like me to do. Posting the review some time after the release? Something else?


Here is what Nina answered: “Honestly, it’s totally ok! Not every book will always resonate with you. You review whenever you want. I’m not one that will ask/tell you to hold a review, ever 😉 ” Now that says a lot about Nina! Respect!

Have you read this book? Or any Erin Watt’s book?