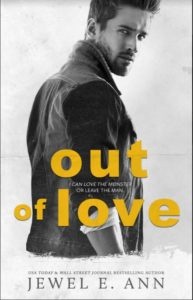 Conspiracies. Corruption. Serial killers.You name it—I’m fascinated by it. My mom always blamed my overly curious and highly suspicious mind on my dad.

Mr. No One Is Good Enough For My Daughter has been terrifying my dates since I turned fifteen.

College is my chance to be free from his control and date any guy I want.

I’m absolutely certain he would hate Slade Wylder—almost as certain as I am that I do too.

Since when have I shied away from trouble?

Slade fascinates me. He lives in a house I’m certain is haunted. His dog is trained as well as any guard I’ve ever seen. Rumor on campus is that he deals drugs. It would explain a lot.

But it doesn’t explain why he saves me from my darkest moment.

It doesn’t explain why I can’t stop thinking about him.

And the explanation I finally discover is far more dangerous than any rumor.

I have never read Jack and Jill’s series by Jewel E Ann but now, I’ll make it my priority!

This book is about “the kids” or rather, Jackson’s daughter and Jessica’s niece: Livy.

Carefree, smart, daredevil and live in the moment Livy.

Jackson had a hell of a job keeping all the guys away from his precious daughter and I laughed so hard in the beginning of the book when he chased guys with pants around their ankles far on the street!

After the death of his wife that nearly killed him, Livy is the most precious person in the universe. And with his resources and skills, he’ll always manage to “stalk/protect” her.

Livy is in college, surfing every day and leaving the peanut butter jar open when she’ll meet the mysterious and sexy Slade Wylder. He sits in her class with his dog and the craziest rumors spread like wildfire about him.

The more distant and aloof he is, the more Livy is determined to catch his attention.

She loves a good challenge and is deeply intrigued by Slade.

But little does she know all the dangers lurking around. A real conspiracy and old revenge.

I read that book over the weekend and simply could not stop!

It’s been some time since I’ve read a book so quickly just because I was intrigued and wanted to know who Slade was and what was his job and why he saved Livy and ….

Livy is sassy and she will push and push until Slade gives. I didn’t know if I must admire Livy or pity her for her pushy attitude and death wish!

Slade is just your perfect anti-hero. He is doing unspeakable things but for the general good. He’ll have you question what makes a person good or bad.

The attraction was present right from the start but as we are not often in Slade’s head, the love story took me by surprise! Slow to appear but then burning like a forest fire, incinerating everything on its way.

This story was mysterious, passionate, angsty, gripping, explosive and hawt! You have secrets, twists and turns, shocking reveals too. The characters will have to make big, life altering choices several times in the story. As it’s Jewel we are talking about, she had me desperate and inconsolable at some point. Emotionally charged, that’s what kept me reading and reading till the wee hours!

I can easily imagine that for those who have read Jack and Jill, this book will have an extra shine to it! Now excuse me but I will go order Jack and Jill right away!

Have you read the Jack & Jill series?