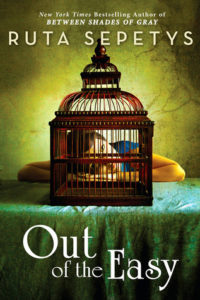 It’s 1950, and as the French Quarter of New Orleans simmers with secrets, seventeen-year-old Josie Moraine is silently stirring a pot of her own. Known among locals as the daughter of a brothel prostitute, Josie wants more out of life than the Big Easy has to offer. She devises a plan get out, but a mysterious death in the Quarter leaves Josie tangled in an investigation that will challenge her allegiance to her mother, her conscience, and Willie Woodley, the brusque madam on Conti Street. Josie is caught between the dream of an elite college and a clandestine underworld. New Orleans lures her in her quest for truth, dangling temptation at every turn, and escalating to the ultimate test.

With characters as captivating as those in her internationally bestselling novel Between Shades of Gray, Ruta Sepetys skillfully creates a rich story of secrets, lies, and the haunting reminder that decisions can shape our destiny.

I discovered Ruta Sepety’s books through audio with Salt to the Sea. It was insta love and I decided to read all her books. I am reading them out of order as my next one was The Fountains of Silence and  another winner.

Out of the Easy is her first published book and I chose to listen to the audiobook when I learned that Lauren Fortgang was the narrator!

This has been a unique experience and confirmed that Ruta is one of the most talented authors to write historical fiction!

I never had a particular interest in reading a story set in the French Quarter of New Orleans in the 50ies but Ruta truly captivated me with her story!

I simply love our heroine, Josie!

We met her when she was a little girl around seven years old. Her mother was a prostitute and went to see her old madame, Willie, in the French Quarter.

Willie was intimidating but Josie did make an impression when she asked Willie if she wanted her Scotch served neat or on the rock!

Josie was incredibly smart! And perfectly aware of her mother’s profession as well as toxicity! Luckily for Josie, as much as her mother was evil, other people around her were really good people and cared for the little girl.

“I was ten, when Mother started her fits and beat me with an umbrella for no good reasons. I quickly learned she was happiest when I wasn’t around. So I’d hide in the bookshop just before close and sleep under the large desk in the office.

On my eleventh birthday, I crept up the stairs after the store was locked. The office had been transformed. The windows and walls had been washed. The desk was still there, but all the boxes were cleared out and there was a bed, a small dresser, and even bookshelves in the corner. A single key hung on a nail. A lock had been installed on the door and a baseball bat leaned up against the bed. We never spoke of the arrangement. I simply began working for Mr. Marlowe in the store in exchange for the lodging.”

This book is once more a study of characters.

In that novel, the brusque madams are not the villains of the story but rather the fairy godmother. An intimidating madame with a thick voice that had mileage on it, red lipstick and dark gowns. One managing a house of pleasure filled with truculent female characters. But a fairy godmother nonetheless.

For every neglect of her mother, someone else will show little Josie some kindness.

Charlie the author and librarian, offered her a safe place.

Patrick, Charlie’s son. He was like a brother to Josie. They had their favorite game of guessing what kind of book a customer would buy and their secret language to convey their thoughts. Dashing, educated, talented musician and dedicated to his father when he’ll need constant help.

Cokie, Willie’s dark-skinned driver, who cared deeply for Josie and at some point gave her his money to reach her dream.

Sexy Jesse the mechanic. A lady’s favorite but always caring for Josie and offering his friendship. Ready to help her at every moment, day and night. Like a knight in shining armor.

Willie, the madame. She may be formidable and intimidating but she had a golden heart. She will protect Josie’s interest. Put her to work as a cleaner as Josie did not want to be a charity case but you could feel the consideration, respect and tenderness Willie had for the girl.

The girls and the cook at the Big Easy with their own quirks and personalities. All whores but all caring deeply for Josie.

Every character from main to side was so perfectly fleshed our that they all had a distinctive voice, adding layers upon layers of authenticity to that story.

And of course, alongside the heroes, you had the villains of the story!

Josie’s mother. An egotistical airbrain. In love with mobster Cincinnati. He was the true bad guy of the story. Always lurking, menacing….

Josie had a dream. She wanted to use her brain for something else than hustle clients. Thanks to a chance encounter with friendly and wealthy Charlotte, Josie dreamt of attending Smith College in Massachusets. Only …her mother did everything to sabotage that dream, selfishly taking and taking. Putting Josie in the live of danger.

Every single time our brave heroine, Josie, had a setback because of her evil mother I literally raged! I was outraged on Josie’s behalf!

If there was a courageous and smart, self-made heroine who deserved to see her efforts come to fruition it was Josie.

But no! Her egotistical mother had to take it all! What mother would repeatedly steal from her child?

Ruta Sepetys did a brilliant job bringing New Orleans to life. I could see the colorful people of the French Quarter, the rich men coming to the brothel to have some fun, the craziness of mardi gras.

I could smell the books shelved in the bookshop of mister Charlie.

The writing is effortless and such a breathe of fresh air!

Filled with eccentric and fanciful characters this story was crafted with great care by Ruta Sepetys and embarked me in a delicious journey. It was funny, heartwarming but also sad and frustrating due to my attachment to Josie. My only complaint is that the ending was totally unexpected and a little “easy” with open possibilities while I do love a good closure accompanied by a perfect epilogue.

Have you read that one?