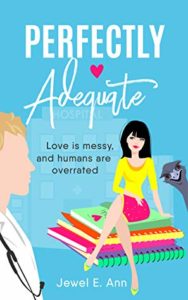 Dr. Elijah Hawkins needs … something. After his wife jumps headfirst into a midlife crisis, he’s left with his young son, Roman, and a lot of unanswered questions.

That something turns out to be a someone—Dorothy Mayhem, nursing student, patient transporter, reckless driver, and emu owner.

Dorothy studies humans, the neurotypical kind, through books and television. Then she emulates their behavioral patterns to fit in with her peers.

But nothing can prepare her for Dr. Elijah Hawkins.

Single dad.
Brilliant pediatric oncologist.
And the sexiest doctor at the hospital.

When his failed attempts at asking her out turn into a string of playdates with his son, Dorothy finds herself unexpectedly enamored with the boy and his father.

And that’s a problem, a huge one, because Elijah’s ex-wife is a famous plastic surgeon—and Dorothy’s idol.

Perfectly Adequate is a beautiful, hilarious, and heart-felt journey along the “human” spectrum. 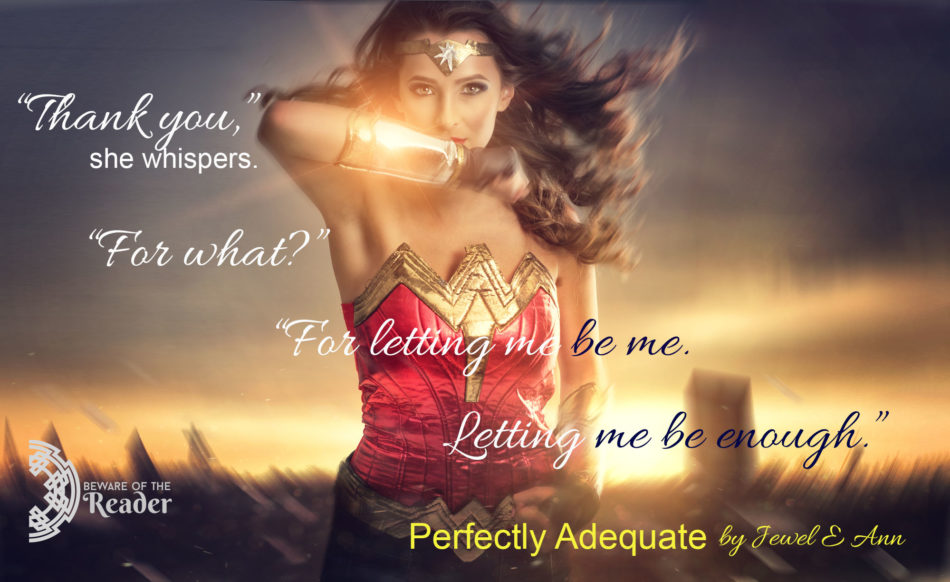 I buddy read that one with Angela from Reading Frenzy Book Blog and I had a blast exchanging comments with her about this!

It’s been my fifth book by Jewel E Ann because I am late to the bandwagon but I realized that Jewel is a versatile author. She can make you read about a dark and moving book like Jersey Six (one of my favorites for 2019) or about a romcom like Perfectly Adequate!

So let’s talk about Perfectly Adequate!

He is lost without Julie, his ex-wife. She left him abruptly and he never understood why. He is still hurt and dreams to get her back. As the synopsis says Elija needs… something.

On one of his Friday lunch with his mom, who happens to be a shrink, she tells him he should date again.

But getting back in the saddle is not easy! Not only because Eli is adorably clumsy as far as dating goes but also because he focuses on someone special: Dorothy Mayhem.

And let’s just say that never a character’s name has been better chosen because she will leave his life in mayhem! Elijah is puzzled, bedazzled, charmed and needing a few days to learn how to communicate with her. Misunderstanding and miscommunication happened first before he could get the hang of it!

“My brain hurts more than my burnt ass. Warren and Dorothy. Dorothy and emus. Willa is Willow. Willow wants to hump my leg.”

Elijah had always done everything that was expected from him and went the traditional way. But when his wife Julie left he just felt …empty.  So maybe it’s time to change tactics and go for some spontaneity and levity. That’s why probably Dorthy was so good to him!

“I just know that my incessant need for things in my life to make sense has gotten me nowhere. No clarity. No family unit. No wife. No hope that it’s all just a bad dream. So I change directions and let instinct guide me.”

Elijah might be clumsy at dating but he took Dorothy’s weirdness like a champ! One of the things I loved so much about him was his buoyancy as far as Dorothy was concerned. He looked like a happy pup while babbling about her qualities to his mom! And I loved that he accepted all of her, without wanting to change who she was.

Let’s get back to the Dorothy topic!

I laughed SO HARD at Dorothy’s brutal honesty! She is “Aspie” or Asperger, brilliant but with no mouth filter and incapable of lying which of course gives very interesting and funny situations! Dorothy is impossible not to love.

She is weird but so kind and selfless. Wanting to help others kids or poor people. Taking care of emus and setting them an Instagram account (it reminded me of Atticus, Sawyer Bennett’s dog). Housing her parents. Studying everything to understand it before experimenting like the art of kissing for example.

Being different is no picnic!

“Being an Aspie isn’t always hot chocolate and marshmallows with rainbow sprinkles. No. Oftentimes it’s showing up to a Star Wars themed party dressed as Mr. Spock, greeting everyone with the Vulcan salute.”

But she is brave and soldiers on. She always tries to do her best, analyzing everything in her journals. Dorothy is one of the best humans!

One of the many interesting aspects of this book was Dorothy’s infatuation with Eli’s ex wife: Julie of “Boss Bitch”.

Julie Hathaway or Boss Bitch who left Elijah one day, without any warning because :

“But I don’t want to be with someone who knows every single part of me. I want to be exciting and new. I want to have a man look at me with curiosity and wonder. I want to keep a part of me for myself. An unsolvable mystery, not a forgone conclusion.”

Yet we’ll learn later on in the book that things were more complicated for Julie.

I loved that Jewel made it impossible to hate Julie.

And Jewel E Ann gave me one of the most raw, real and heartbreaking scenes when Julie explained the real reason. So many churning emotions and quandaries.

I don’t want to spoil anything but let’s just say that I could never hate Julie, even if she left Eli and when Jewel delivered what would be a little gem of a scene with Julie’s explanations I was just AWED! Because I could understand and empathize. It was honest to a fault and something we often experience at least once in our life but not to Julie’s extent luckily. It rang so true that again I wonder if Jewel experienced it!

The only aspect “bothering” me was Eli’s kind of insta-love. I won’t say more about it but I guess it is part of who Eli is and how unconditionally he loves!

To sum it up: this is a romcom that is more than a romcom as it’s filled to the brim with laughter, emotions and lots of wisdom! I dare you not to like it!

PS Jewel you’d better sell that wonder woman outfit as I need it for my next slumber party!

Have you read Jewel’s books? Do you want to now?