A bad deed will always come bite you back or when revenge is savage. 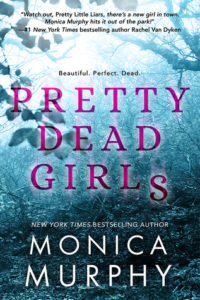 Beautiful. Perfect. Dead.In the peaceful seaside town of Cape Bonita, wicked secrets and lies are hidden just beneath the surface. But all it takes is one tragedy for them to be exposed.

The most popular girls in school are turning up dead, and Penelope Malone is terrified she’s next. All the victims so far have been linked to Penelope—and to a boy from her physics class. The one she’s never really noticed before, with the rumored dark past and a brooding stare that cuts right through her.

Everyone has secrets, and theirs might get them killed.

A bad deed will always come bite you back or when revenge is savage.

Welcome in the world of high school snotty girls. The Larks are already raising funds and investing their times in charities but backstabbing their friends all with a big Pepsodent smile.

“The Larks is a small group of ten girls who are the smartest, the most respected, the most athletic, the most popular in our school. We all try to make the top grades so we can get into the best colleges and make our school and our families proud. And the Larks isn’t just about community service—it’s the ultimate overachievers group. “

Penelope is the Larks president and believe me when I tell you it was like managing a pack of hyena just more beautiful.

“Not that I was the nicest person, I realize this. I had a reputation as a snob, yet it never bothered me. I was just following in my sister’s footsteps, who also ruled the school back in the day. Most of the time, I secretly liked it when people would scurry away when they saw me coming. That crowds would part to allow me to walk through and people called my name because they were desperate to be my friend. It made me feel powerful.”

I struggled with the story in the beginning. Condescending Queen Bees plural don’t make for easy heroines to like. Maybe sweet Mandy was the kindest and most redeemable of the bunch.

I just wanted to give Corey, Gretchen and the likes a good spanking! Insufferable.

Penelope was somewhat less snob but it was not your usual perfect and relatable heroine that you love to like!

When a killer strikes the Larks one by one Penelope is frightened. She may be the next. The murders unearth some ugly secrets. The girls were popular and part of a community but they were far from good friends! It was like Gossip Girls and all the mean girls trying to overpower the others. A real competition!

Enter Cass. Cass is the loner student. Mysterious and possessing a bad rep. he has baggage. Penelope never noticed him before but since Gretchen’s murder she crosses his path all the time. Is it random? Does he have ulterior motive? Unnerving he seems to know a lot more about the dead girls than what could be expected of an outcast. His mother was unhinged so maybe Cass should not be trusted?

Swinging between suspicion and attraction Penelope is taken by Cass’s good looks but she does not trust him. This is the heart of the story: who can you trust? Who is killing the girls? Why?

I never guessed the murderer’s identity. Monica Murphy leaves some clues just to send us on a goose chase and a dead end.

Now let’s have a look at the characters.

I told you that Penelope was not easy to like but I loved Penelope’s character development. From entitled rich girl she became more compassionate and humble. The murders, the secrets made her realize that being at the top by crushing others was not admirable. Friendship and support was what mattered.

Cass hotness and aloofness helped make this story even more attractive. Especially when you learn his secrets. Put a handsome guy hiding a troubled past and I will follow his every move with the utmost attention!

Monica Murphy made the uneasy choice to go for flawed characters. The girls, Cass feel real. They made and still make mistakes but it shapes their personality. They change. This is real life:  no black or white characters but rather various shades of grey.

So what is missing to give a higher rating?
The murderer is impossible to guess based on the clues. The tension is ever present and it keeps us reading because of course we want to know who is next and who did it. This is all good but when the killer’s identity was revealed it was like producing a white rabbit out of a hat. Totally unexpected.

I want to thank Entangled Publishing for its trust as I had a great time reading this mystery. Recommend it? Yes especially if you are a fan of Monica Murphy and if you don’t know her yet this would be a perfect first read.