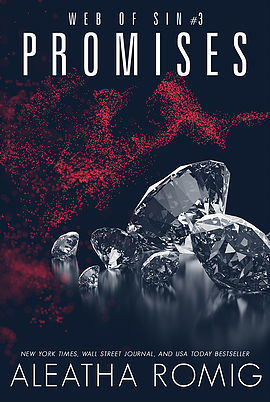 The twisted and intriguing storytelling that you loved in Consequences and Infidelity is back with the stunning conclusion of an all-new alpha anti-hero in the dark romance series Web of Sin, by New York Times bestselling author Aleatha Romig.
You won’t believe your eyes as Promises brings the Web of Sin trilogy to a dramatic close.Have you been Aleatha’d?Promises is book three of the Web of Sin trilogy.

Thank you Aleatha for sending this copy even when I told you that I would not be able to review on time for the release!

It’s my favorite of the trilogy!

I really liked the other ones of course but what I adored in this one was putting all the jigsaw puzzle pieces together to guess the truth!

In this last installment we are left with wanting to guess what happened to drive Aranea to the Marsh when she was a baby.

How did Josey Marsh become her mother? Who gave Aranea to them? Was her father aware that she has been given away or not? What role did Sterling’s father played in this exactly?

Then of course there is still this “old wives tale” about Aranea owning important information that could be the demise of Rubio. But how could it be possible as she was a baby when she’s been “kidnapped” from her birth mother?

If this is not enough there is still the problem of the FBI wanting to bribe Aranea to feed them information able to destroy the Sparrow empire.

Oh and let’s not forget some kidnapping and other intimidating attempts.

As you can see Aranea, Sterling and their “extended familiy” or “the boys” alias Reid and Patrick (plus Lorna but then I guess I can’t call them the boys anymore) had their hands full!

You never have a dull moment. It’s thrilling and my brain was working overtime trying to guess before them *of course you try to find it before the characters do! Where would be the pleasure otherwise? Duh!* what happened twenty six years ago but also ten years ago when Aranea *known as Renee at that time, follow please!*became Kennedy.

Well I’ve spoken aplenty of the suspense but let’s not forget the love story here. Because Sterling and Aranea in barely one months took not baby steps but giant leaps in their relationship.

From rebelling to be forced to live in Chicago in golden cage and contesting every order Aranea is now happy with her fate as she could see behind the mask Sterling offers to the world. She is now understanding his world even if she does not want to know all the details.

Of course she would not have become so “compliant” if Sterling did not change and agreed to “ask” instead of “imposing”; to try to see it from her point of view and explain. But Sterling will always be possessive and protective and an overbearing Alpha! Let’s just say that he mellowed a little but that it’s mainly Aranea who is now convinced that he has her best interest at heart and does everything with a loving intention!

Aranea is really strong and resilient. She chooses a difficult path: seeing the light instead of seeing the darkness everywhere. That’s not to say she has rosy glasses and is ignorant. No she is aware of the ugliness of the world.

Aleatha reminded us of something very important here.

You may see on the news, in the streets some dark and ugly events. But remember that these if they are loudly displayed are only a small part of the world and that the majority of people are good. Our world is beautiful more than it is ugly.

That was Aranea’s choice and that’s also why she was perfect to balance Sterling and draw him into her light.

I know that some may be furious with Aranea. Because yes she chose to love a mobster. Someone who did and still does bad things. Don’t be fooled here Sterling is not the white knight! He is Aranea’s white knight and he has mobster “ethics” as he draws the line at children. He did wonderful things for victims. But he remains a mafia man. Aranea’s choice to live and accept his world without wanting to see too much of it will displease some readers. They won’t agree with her choice.

And that’s fine I get it. Personally as this is a work of fiction and me being a big romantic with “love conquers all” etc it did not really bother me.

Ok I am stopping here promise!

It’s just been a hell of a ride and I had a fantastic time reading this trilogy.

I recommend these books to lovers or Alpha male and strong heroine who are in heaven with stories happening in the dark underbelly of this world.

Have you read Aletha’s books?