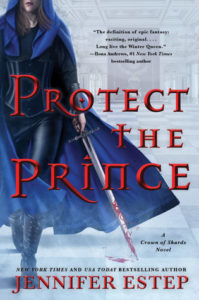 Everleigh Blair might be the new gladiator queen of Bellona, but her problems are far from over.

First, Evie has to deal with a court full of arrogant, demanding nobles, all of whom want to get their greedy hands on her crown. As if that wasn’t bad enough, an assassin tries to kill Evie in her own throne room.

Despite the dangers, Evie goes ahead with a scheduled trip to the neighboring kingdom of Andvari in order to secure a desperately needed alliance. But complicating matters is the stubborn Andvarian king, who wants to punish Evie for the deaths of his countrymen during the Seven Spire massacre.

But dark forces are at work inside the Andvarian palace, and Evie soon realizes that no one is safe. Worse, Evie’s immunity to magic starts acting in strange, unexpected ways, which makes her wonder whether she is truly strong enough to be a Winter Queen.

But Evie’s magic, life, and crown aren’t the only things in danger—so is her heart, thanks to Lucas Sullivan, the Andvarian king’s bastard son and Evie’s . . . well, Evie isn’t quite sure what Sullivan is to her.

I loved Kill the Queen so much that I had to buy extra credits on Audible as I could not wait for my new credit, days away, before listening to its sequel Protect the Prince.

One thing is certain: that series is addictive!

And the issue that I had with the world building and the slow “feel”  in the first book is completely gone!

In “Protect the Prince”, we follow Evie while she now is Queen of Bellona.

Being queen is no picnic because:

-there is always someone who wants to kill the queen.;

-micro managing nobles with overinflated egos and petty problems is like raising toddlers;

-there is always someone who wants to marry you to one of their male relatives;

-Evie must discover what being Winter Queen really means;

-a queen can’t marry a commoner, even less a bastard prince, whatever her feelings for him;

Honestly, being queen is so not what it’s rumored to be!

Look at Harry and Megan and you’ll see that Jennifer Estep has it totally right!

I loved that sequel, even more than the first one.

I must admit that I had guessed who the traitor was but probably that most of you will be in for a big surprise!

I also want to say that the complicated love story between Evie and Lucas had me ready to eat my headset as I was so angry and angsty and….

I understood Lucas reasons for not wanting to be second best, pride and pas hurt included.

I also understood Evie who had a kingdom to rule and nobles to satisfy.

But I couldn’t avoid thinking: just talk and go for the bold choice! It’s your life! Your happiness!

I am now even more in love with that universe, with all the characters and I can’t wait for the last book!

Have you read this series!