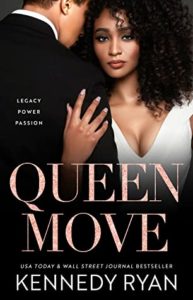 The boy who always felt like mine is now the man I can’t have…Dig a little and you’ll find photos of me in the bathtub with Ezra Stern.
Get your mind out of the gutter. We were six months old.
Pry and one of us might confess we saved our first kiss for each other.
The most clumsy, wet, sloppy . . . spectacular thirty seconds of my adolescence.
Get into our business and you’ll see two families, closer than blood, torn apart in an instant.
Twenty years later, my “awkward duckling” best friend from childhood,
the boy no one noticed, is a man no one can ignore.

Tell me it’s wrong.
Tell me the boy who always felt like mine is now the man I can’t have.
When we find each other again, everything stands in our way–secrets, lies, promises.
But we didn’t come this far to give up now.
And I know just the move to make if I want to make him mine.

I didn’t want to stop reading.

This was my first Kennedy Ryan in a loooong time but the trope of kind of childhood sweethearts estranged and reunited with some forbidden element in the mix was too good not to try!

You have some paragraphs, passages that hit you right in the face because they are spot on and beautiful altogether.

“I think every morning when Ezra wakes up, God gives him a tiny jar of words. He only gets so many, maybe a quarter of what the rest of us do. And he’s so scared he’ll run out, he uses as few of them as possible. Half his sentences are one word or a grunt. Weekends, he talks so little, I bet at the end of the day, he has leftovers.”

I loved the friendship between Kimba and Ezra.

These were childhood sweethearts. They were soul mates and it was heartwarming and cute to read.

But talk about everything conspiring against them!

This book is above all else a character driven story, revolving around Kimba and Ezra.

Both were amazing and very relatable characters.

“Daddy used to say don’t waste time on things that don’t set you on fire inside, and I haven’t.

Kimba as a grown woman is driven, smart and a force to be reckoned with! She loves people and wants to make a difference. She descends from queens and wants to do her family justice.

She also knows her body, what she wants and likes. She inhabits her body, owning her curves and that’s empowering!

What Kennedy did to her to advance her story is one of the worst things that can happen to a woman and my heart broke for Kimba.

As I hinted above, Kimba knew Ezra since they both were kids, born on the same day but they went their separate ways after some drama that we won’t know about for a very long time in the story.

When they meet again, far in their thirties, let’s just say that there is a huge complicated and forbidden aspect to having perhaps, one day, a romantic relationship. Yet the pull is strong!

But both Kimba and Ezra are amazing characters with a strong sense of right and wrong.

Ezra is a good boy and a good man.

That made me realize that I am fed up right now with @holes heroes. I am all for the good guy, the one that will stand by you, the one that won’t bully you or manipulate you but believe in you. The man that will support you whatever path you choose. The man you can have mascara running on your cheeks and a bad hair day and he’ll still think you’re the most beautiful woman on earth.

Also, the man who would never cheat on his wife, whatever their relationship.

Ezra was that man.

“I’m a Kimba man, and I think she’s ruined me for anyone else.”

But since he was a boy, he was above all else a Kimba man.

I got frustrated by the end as I wanted them to have a happy end. They deserved it. But would they have it or not???? Gah Kennedy! I couldn’t stand it!

And … I wanted more. The good news is that we’ll get two more chapters but I hope it will be a very extended epilogue because I have been sooooooo patient waiting to know IF they would have what they wanted. I now deserve to know more!!!

Have you read Kenendy Ryan’s books? What did you think of them?