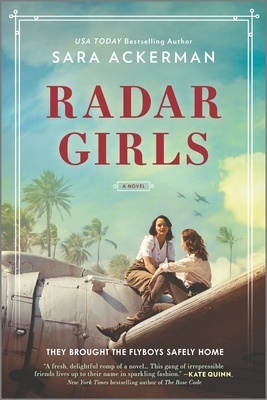 An extraordinary story inspired by the real Women’s Air Raid Defense, where an unlikely recruit and her sisters-in-arms forge their place in WWII history.Daisy Wilder prefers the company of horses to people, bare feet and salt water to high heels and society parties. Then, in the dizzying aftermath of the attack on Pearl Harbor, Daisy enlists in a top secret program, replacing male soldiers in a war zone for the first time. Under fear of imminent invasion, the WARDs guide pilots into blacked-out airstrips and track unidentified planes across Pacific skies.

But not everyone thinks the women are up to the job, and the new recruits must rise above their differences and work side by side despite the resistance and heartache they meet along the way. With America’s future on the line, Daisy is determined to prove herself worthy. And with the man she’s falling for out on the front lines, she cannot fail. From radar towers on remote mountaintops to flooded bomb shelters, she’ll need her new team when the stakes are highest. Because the most important battles are fought—and won—together.

This inspiring and uplifting tale of pioneering, unsung heroines vividly transports the reader to wartime Hawaii, where one woman’s call to duty leads her to find courage, strength and sisterhood.

Short review for an engrossing book.

I love reading about WWII but so far had read nothing involving the war in the Pacific ocean.

The book centers around Daisy Wilder. At the beginning of the story, she is a real loner. Prefering the company of horses, needing her daily dose of ocean and nature, the war will propel her in a totally different position.
Following Pearl Harbor’s attack, she’ll be enrolled into a section composed of women only and charged to guide the pilots, detect possible attacks etc thanks to the radar technology.

In the beginning she is overwhelmed by the proximity with the other women. She is used to silence and loneliness but these ladies were very vocal and so different from Daisy.
But soon she’ll find incredible friendship among these women.

During hard times, Daisy will find satisfaction in her job, relishing being useful and capitalizing on her love of mathematics.

Throw some love story in the mix and you have a very interesting and enjoyable read!

I think Sara Ackerman did her research seriously and I truly loved learning about that side of the war history.
The friendships were heartwarming, the female character strong, smart and loyal and the pace was just right.

If you love WWII stories, I’d recommend this one!