I had promised a second post with some more “personal” tales on my Paris adventures with my mom while attending RARE Paris!

Here it comes with a collection of “moments”. Think about it like a photo album.

I love my mom! She is 79, always elegant and joyful! She finally learned how to walk into a city without being lost! I told her to look behind her when she changed direction and spot some landmark! It worked. 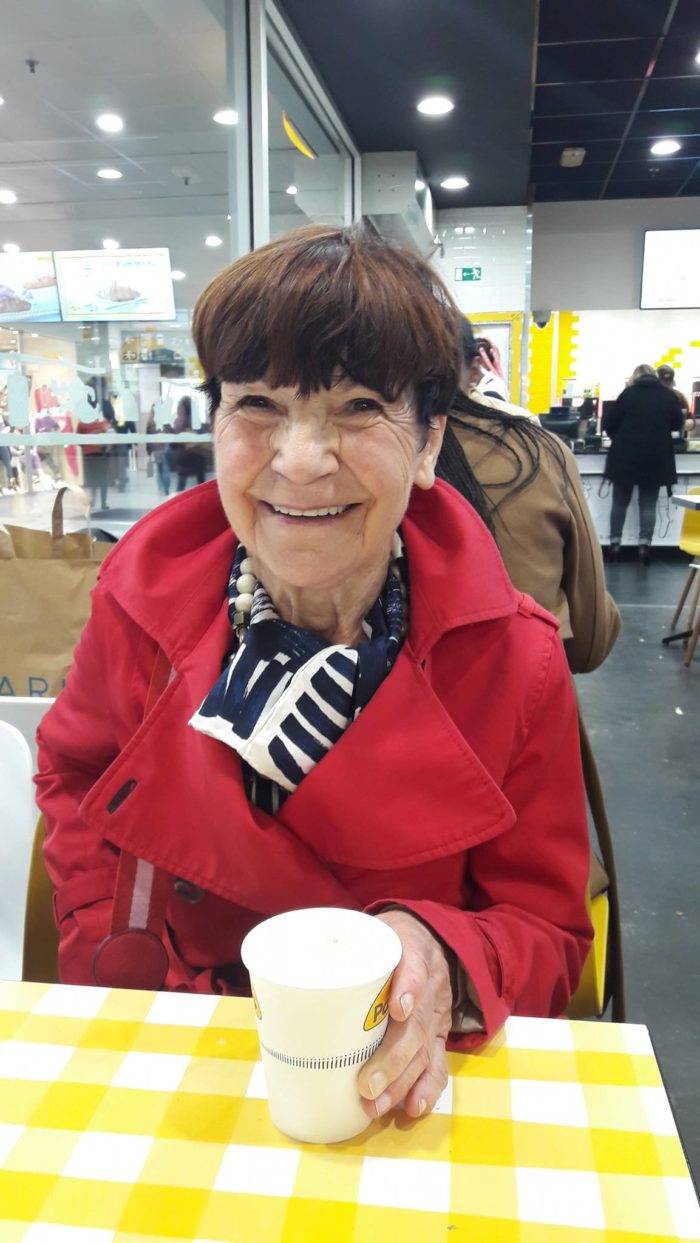 Taking pictures of ducks, birds and beaver rats in the Bois de Boulogne is the best way to make friends with sweet old men walking or fishing in the park. I guess it’s like walking dogs or babies it makes you look friendly! They gave me tips on where to find the most interesting spots to take great pictures of animals! Meet the beaver rat! 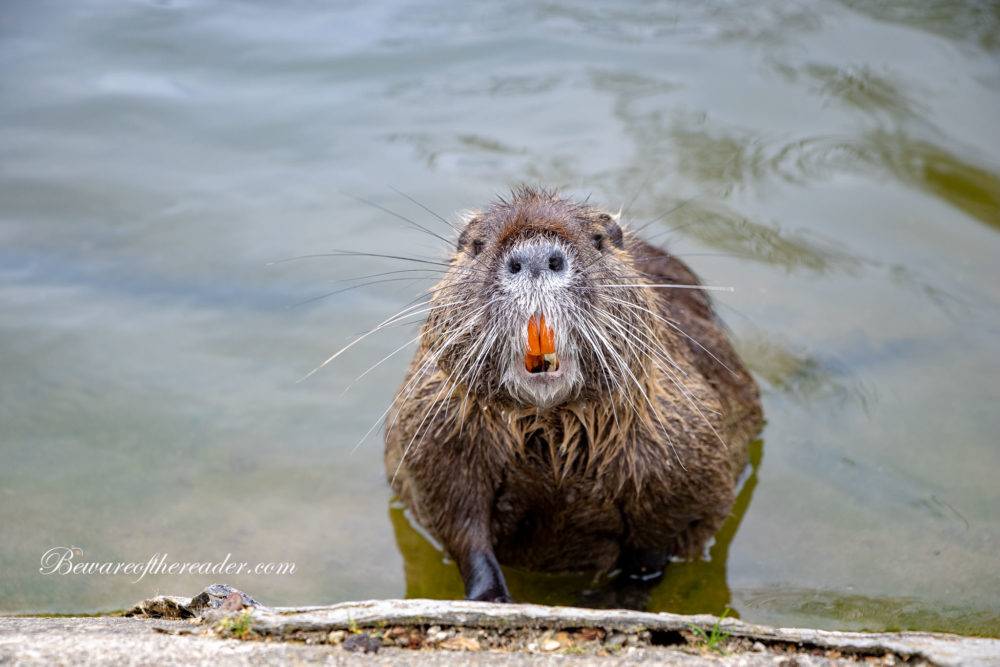 French breakfast …sucks! If you like wholegrain bread, cereals with some fibers, fresh fruits etc you won’t find it in your conventional French hotel! Vive la baguette blanche! I much prefer the American and English Breakfasts!

Not all subways and stations have lifts or escalators! Forget the fitness club carrying a suitcased filled to the brim with books is the bets fitness!

Setting up a banner can be a challenge when you are small like me! I had to climb on a chair to roll it up all the way!

Emma Scott is TALL! And I am tiny! So it gives some funny picture where you think she embraces a dwarf.  She is also very generous as she gave me two books that I wanted to buy and two others signed to organize a giveaway!

She also had ordered TONS of books. Part were numerous pre-orders and others books to sell. I was not her assistant but as we were already all set at Scarlett Cole’s I gave a hand to set up Emma’s table. 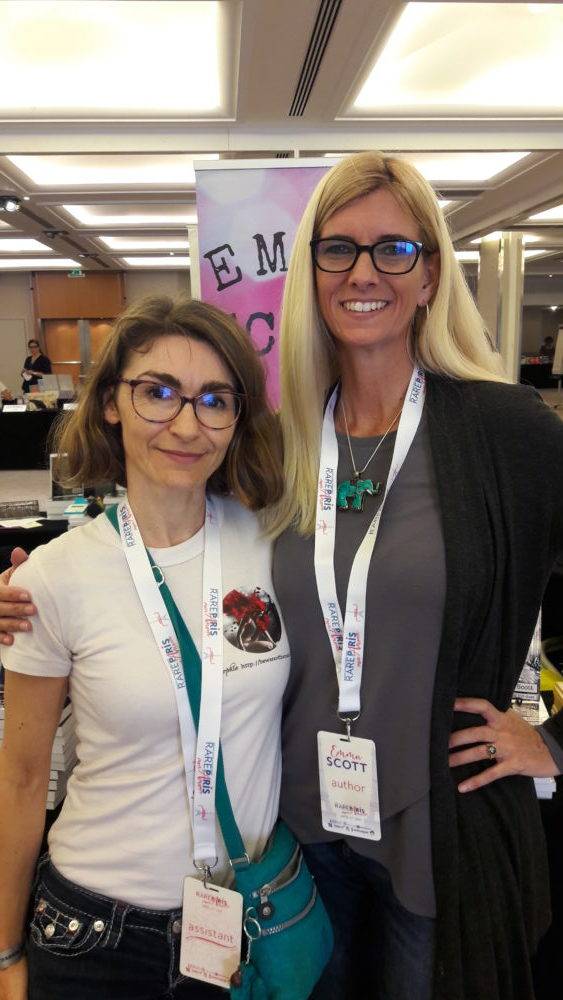 Some authors come with their family and Scarlett Cole came with her 10 years old daughter Lola. She has sass aplenty! We had a hoot with that little cutie who wore high heels like her mom for that special day and extra long fake nails! She learned the hard way that unwrapping a lollipop was challenging with long nails and I ended up being her personal lollipop helper.

Tille Cole loves chatting with her readers and gets pretty excited and intense while talking about her books. She came with her hunk of a man! A tatted, heavily muscled professional rugby player! I bet part of her queue was due to this eye candy 😀 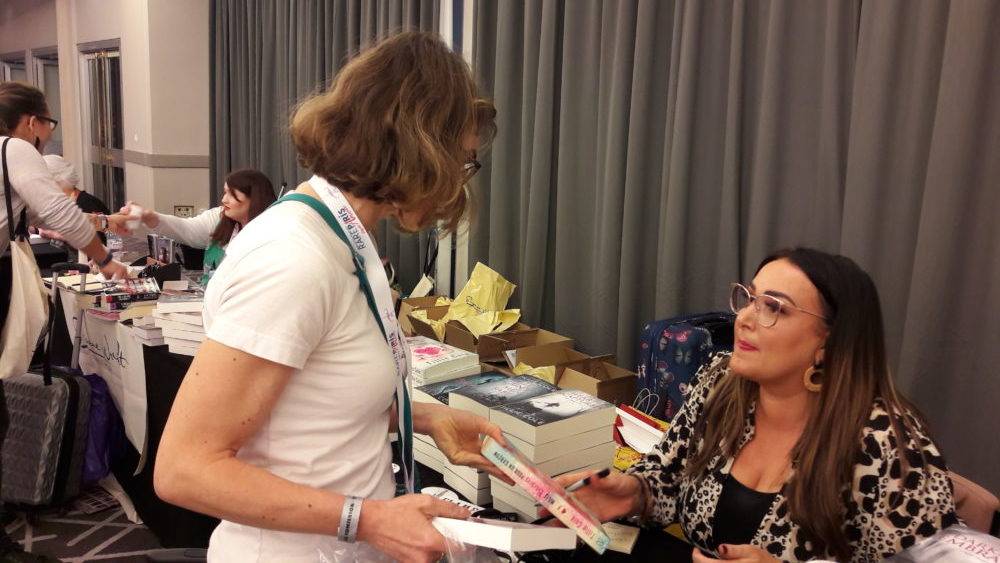 When waiting to meet Tillie in the looooong queue I chatted with a man who had been sent by his wife! She was a French author signing that day and big fan of Tillie! I chatted a long time with him and he explained that his wife was autist and events like these where she had to chat and meet her readers were a challenge. When she joined us later and I offered to translate for her he told me that I was “adorable”.

Book lovers are very helpful and when I had no time to meet Jennifer L Armentrout as I had to begin my “duty” a very kind young lady offered to get my books signed! My daughter and I will be eternally grateful!

Mariana Zapata is on the small side like me! She was the table next to Scarlett Cole and I played interpretor for both authors! She also is not used to talk much, living with her dogs and hubs and had a sore throat by the end of the day. She came with her mom, a tiny and very sweet lady offering huge colorful lollipops to everyone, me included. At the end of the day she hugged me extra hard, so happy that I had helped her daughter and sang her praises! Best hug ever! 😀 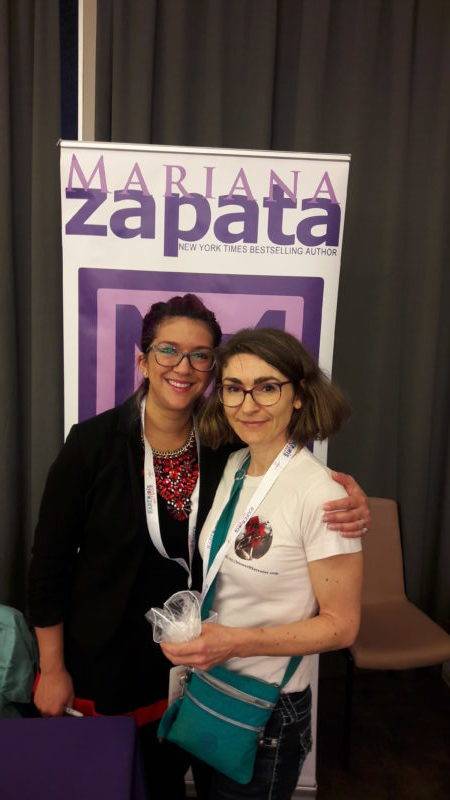 Wearing my T Shirt with the blog’s logo helped other bloggers to spot me! I met Na Book Addict Dine with her pink hair, Brandee from (Un)Conventional Bookworm was our line attendant! It was so great to talk books with that sweet blogger who came all the way from Colorado! And Santoesha Somai, a facebook follower gave me a big hug! I was so happy to meet that young, sweet and cute lady!

You learn  that authors have favorite characters! We decided a poll was needed with Scarlett as she always asked what male character was the reader’s favorite. Trent won but Scarlett prefered Cujo because he was goofy, a jockester like her man. Her kind of guy!

When you offer to translate for other readers you literally see the life coming back in their eyes! I would say that 90% of the French readers did not speak English or not easily. It was a privilege for me to help them chat with their favorite author and be part of this memorable moment! By the end of the day I could tell them all about Scarlett’s new series, the release schedule in French, what it as about etc!

I also learned that Scarlett Cole was a very generous author, always taking the time to chat, write a personalised word and taking pictures with her fans! She told me that we had paid a big amount to attend and it was a special occasion for the readers so the least she could do was give her time! 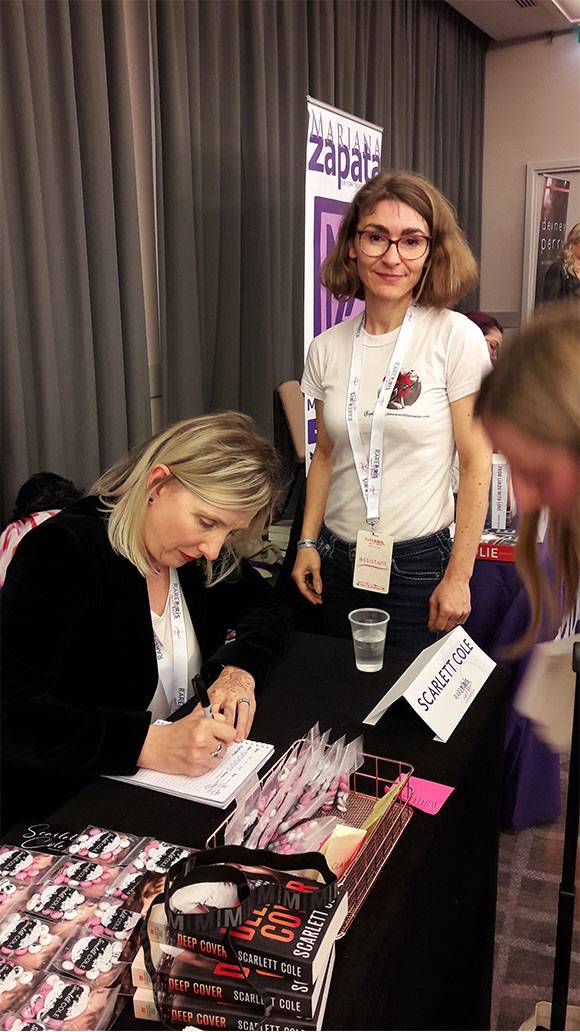 I had a startruck moment at lunch time when I was seated at Tillie Cole, lauren Rowe, Willow Winters, Scarlett Cole and Mariana Zapata’s table! Mariana was my table neighbor and we looked at our dog pictures, chatted about Colorado that I visited and fangirled over Ruta Sepety’s books!!!! Best moment of the day as she was one author that I so wanted to meet at RARE London but could not due to the huge queue.

By the end of the day I had been six hours on my feet, must have translated for more than two hundred people, taken countless pictures and was on an adrenaline high! Scarlett told me it has been her best signing ever and we had a huge line of people till the very last second! She gave me two books, signed of course!

I was tired but very happy to have been helpful! This is the best feeling in the world!

I am ready to do it again if I am attending alone!

You now have my collection of moments. I hope to have shown you some “behind the scene” of my Paris journey!