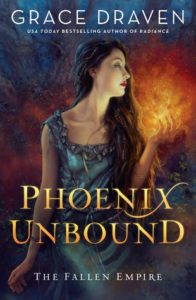 A woman with power over fire and illusion and an enslaved son of a chieftain battle a corrupt empire in this powerful and deeply emotional romantic fantasy from the USA Today bestselling author of Radiance.Every year, each village is required to send a young woman to the Empire’s capital–her fate to be burned alive for the entertainment of the masses. For the last five years, one small village’s tithe has been the same woman. Gilene’s sacrifice protects all the other young women of her village, and her secret to staying alive lies with the magic only she possesses.

“The two of them were bound by a common past of subjugation and a resolve to overcome the damage it wrought.”

I think this first quote is the best way to symbolize Azarion and Gilene’s relationship as well as give you a taste of Grace Draven beautiful yet not too flowery ‘s writing.

I had no idea this book was about to be published untill I saw its review on Mel’s blog. It was a one click as I adored Eidolon!

What I got was a solid, steady story about a very slow burn relationship.

Grace Draven didn’t make the romance the focal point of this story. As it probably is the setting of a series, I expect or rather need more of a romantic trope in the second book.

This was about two people who have been toys of a cruel empire. Most people are abused by this empire who does not care for its citizen but rather indulges its sovereigns. Among the rulers prevails the evil empress.

The whole purpose of the book is to escape the empire’s clutches, plot a revenge against the traitors and ultimately against the empire.

When Gilene meets Azarion it’s not insta love nor insta lust nor insta friendship. There may be some compassion as Gilene realizes Azarion is a pawn and goes through insufferable cruelty in the pit but also at the hands of the empress. She is chained to her fate, condemned to burn again and again to spare her village because of the empire’s sick amusement.

He is forced to fight and kill every day just to be abused and raped right after.

When Gilene tends to Azarion’s wounds she does it with care and empathy. Yet she resents Azarion for what he’ll force her to do. 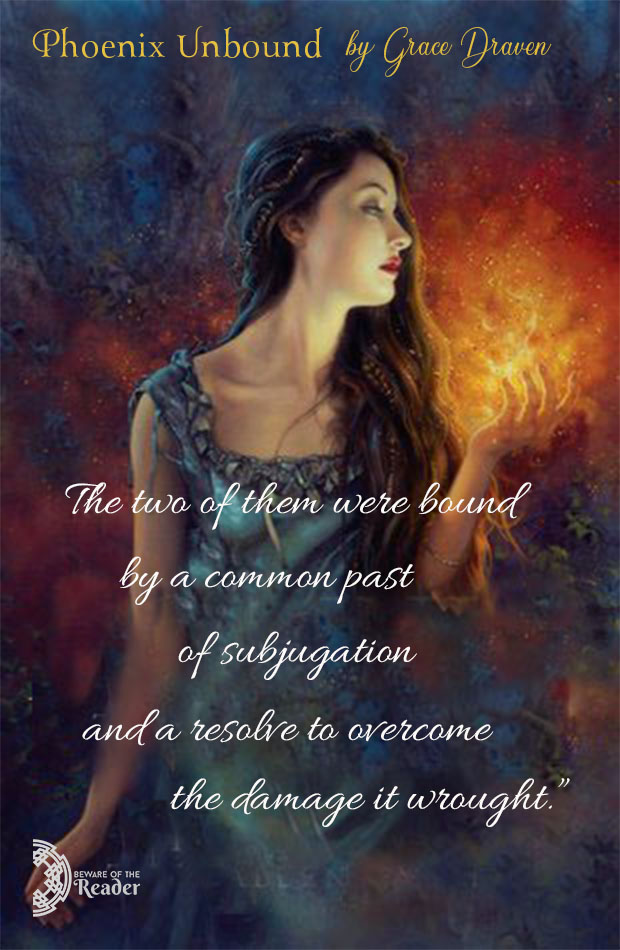 Never in her life had Gilene a real choice, a chance to do what she wanted.

Azarion capturing her to help him get his revenge did nothing to endear him to Gilene’s eyes.

Yet as the story progresses and Gilene discovers not only someone courageous and manipulative but someone loyal, dedicated and true to his word her opinion will sweeten.

From unwilling ally she’ll come to really help Azarion in his endeavor and will wish for his success.

The pace of the story is steady. Not too slow to get boring, not too fast to overlook important details it lets Gilene and Azarion’s relationship unfurls progressively. You have action in the book and sometimes you’ll tremble when confronted with evil ghosts but you are not on a crazy ride either. Well yes, sometimes you ride hard as you are pursued but what I mean is there is a balance in everything in this book.

I loved that Grace Draven took the time and the care to give us details about this world and time. How you tend to wounds, how traders live, how nomads live and what they eat, forage etc.

Yet again this is just enough details to give life to this world and not too much to drown you.

I also loved that Grace Draven made the building of the relationship believable.

If you had been abducted, blackmailed to help your captor reach his goal, you would not fall into his arms like a lovesick teenager. No you would be cold, mistrusting yet forced to rely on him for your own safety in world where women are raped and enslaved.

It would take time to warm up to him.

It would take him defending you against ghosts and soldiers, him tending to your wounds and his family’s loving eyes to begin trusting him and care for him.

“What if I had fallen or couldn’t keep up?” “ I would have carried you.”

That’s what happened to Gilene.

Azarion was immediately awed by Gilene and it was understandable as his people worship the fire goddess Agna. She was agacin to his eyes and they were revered by his people.

But if Azarion admired Gilene he was above all else a very determined and practical man who knew that without the agacin his chance to reclaim his birth right were slim to non-existent.

If he kidnapped her and was determined to force her compliance he did it with remorse and regret.

When I used the word “steady” in my introduction I had Gilene and Azarion in mind.

Gilene was a very courageous woman. Proud and dedicated to her mission. Not easily frightened yet not foolish either. She endured her suffering every year and paid a high price for her magic, wearing her scars with pride as it was a testimony to her sacrifice.

“Be still. Be silent. Some lust for beauty, others for fear. Don’t show them yours.“

She was a no-nonsense kind of heroine. Gilene cared for others yet usually kept them at arm’s length as no one had ever opened their heart to her. Even her own family did not really show love.

“No other woman in Beroe is safe from fire. It would be wrong and cowardly of me to let them burn when I can go in their place and survive. It doesn’t mean I have to like it because I’m willing to accept it.”

She was the perfect counterpart to Azarion.

Azarion is a hero in shades of grey. He had to become hardened by the years of torture. He had to bury deep what he went through each day to be able to survive and one day get his revenge.

Him abducting Gilene shows that her would do everything to reach his goal.

Reading Phoenix Unbound was like drinking fine champagne: you don’t rush through it you savor your time.

So why not five stars? Because I feel the ending was lacking something. I would have loved some more pages about “after”. Yet I suspect this is the best choice as all will be developed in a second book. One missing star too because if I love slow burn this was more than slow burn. I want more romance. Once more I hope this comes in the second book.

Have you read it? Or do you plan to read it now?