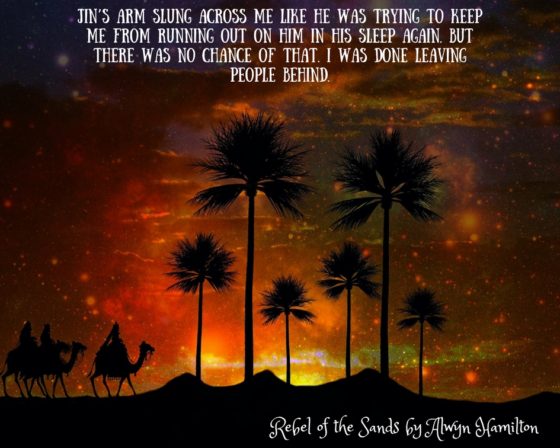 A copy has been kindly provided  by Faber and Faber through Netgalley.com in exchange for an honest review.

I love female character taking fate by the horns. I love fantasy. I love tales with Djinni, Ghouls, sand and fire creatures. I love epic adventure where you escape soldiers, jump from roofs and discover unexpected new talents. I love romance. This book and I were a match made in heaven!!!!

This is a world where

“ Djinn who fell in love with worthy princesses and gave them all of their hearts’ wishes. Pretty girls who lured Nightmares straight on to men’s blades. Brave merchants’ daughters who caught Buraqi and rode them to the ends of the earth”

and I loved everything about it!

She is a girl from Dustwalk a poor small desert town where girls are worth nothing and guns are plenty as it’s hosting the Sultan’s weapon factory. Orphaned and oppressed by her aunt and uncle she dreams of escaping this life and find her aunt in Izman. She’s taught herself how to shoot a gun for years now and tonight is her night. She’ll win the shooting competition and will leave with the money. Only… it did not go according to plan.

Never backing from a challenge she is smart mouthed.  “Aunt Farrah always said I didn’t seem to mind proving myself dumb if it meant proving someone else wrong.”  Very handy with a gun she’ll soon be embarked on an incredible adventure following Jin the foreigner. It will be a constant race across the desert alongside Jin, escaping magic creatures and soldiers.

“My story. I’d spent my life dreaming of my own story that could start when I finally reached Izman. A story written in far-off places I didn’t know how to dream about yet. And on my way there, I’d slough off the desert until there was nothing left of it to mark the pages. Only Jin was right. I was a desert girl. Even in Izman I would still be the same Blue Eyed-Bandit with a hanged mother, who left her friend dying.”

For a very long time in the book I wondered if Jin was working with the rebels. The country is under the Sultan’s reign and his allies the Gallans. The Gallan people chased all magic from their land and killed the old beings. They hunt every magical creature and their children, born from women and Djinni.  The Sultan’s rogue son wants to seize the power kick the Gallans out of the country and create a new dawn, a new desert.

Amami can’t ignore what’s happening to her people, her desert to their beliefs.  From the girl leaving others in the dust in her need to create her own lonely path she’ll become a part from something bigger. She’ll make new friends  and find kinship. Something worth fighting for.

“This revolution was a legend in the making. The kind of tale that sprawled out long before me and far beyond my reach. The sort of epic that was told over and over to explain how the world was never the same after this handful of people lived and fought and won or died trying. And after it happened, the story seemed somehow inevitable.“

It was fast paced. The storytelling was compelling, the plot solid without any filler or dull moment. The characters are very well portrayed and I could relate to Amami as she wants to be someone worthy and not “just a girl”. She wants to take matters in her own hands and not be ruled by men. I could never live under other’s thumb and could only cheer each time she did something reckless to save someone else or escape by the skin of her teeth. I loved the banter and her sarcastic remarks. I’m always admiring girls with wit and she had it in truckload! I swear you’ll also root for her.

The tandem with Jin worked very smoothly. They had each other’s back and were perfectly assorted always doing some grand last minute escape. I swear I forgot to breathe so many times always believing this would be the end!

So it’s epic tale or epic fantasy at its best and I can’t wait to read the second book!