Are some secrets meant to stay buried?

Three months have passed since Jason “Grizz” Talbot was put to death by lethal injection for crimes he committed. His former wife, Ginny, whom he had abducted from a convenience store when she was a teenager and became the love obsession of his life, has spent more than the last decade trying to carve out a life of normalcy in the bustling suburbs of Fort Lauderdale—including a thriving and happy marriage to Tommy “Grunt” Dillon, a former member of Grizz’s gang.

Tired of the secrets and the lies, Ginny and Tommy thought the final piece of their past could be left behind forever with Grizz’s execution. However, the past comes crashing around Ginny and Tommy when a newly discovered secret threatens to destroy their marriage. When tragedy strikes, Ginny is forced to reach into her heart and decide, once and for all, what she really wants.

​In this third book in the Nine Minutes trilogy, A Gift of Time takes readers from the busy tropical metropolis of South Florida into the serenity of the North Carolina Blue Ridge mountains as Ginny chases down the answers she needs.

Will she have the strength to confront the secrets of her past…and her heart?

It’s been a Hell of a ride and now I’ve a huuuge book hangover! What will I do now? What will I read that will rival A Gift of Time? I should have read slower but I simply needed to know what would happen. 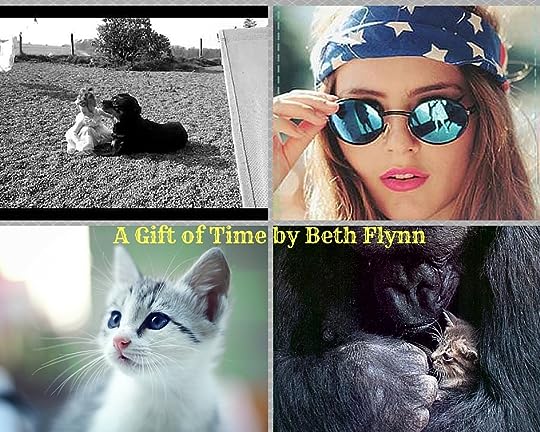 I won’t explain much about the plot as I don’t want to spoil your fun. Just know the book begins where the second book ended and is told from multiple points of view, with Kit, Grunt and Grizz being the most prominent. Beth Flynn still uses the back and forth between past and present events and she organizes her chapters so cleverly it works effortlessly, giving that unique style I loved so much in her former books.

It wasn’t planned but I happened to read A Gift of Time with two other friends. Our “trio” buddy read was really interesting as we all had the same reactions and questions. The feelings where intense, blood pressure through the roof and our nights… very short.

To summarize some of our conversations:
-we all loved Mimi. She is innocent in some ways, had some misadventures but she also is incredibly smart and determined. I liked seeing her having a bigger role in this last book and I hope one of the future spinoffs will revolve around Mimi;

–we had incredulous reactions many time as we could not believe what we read, the secrets we learned. Beth Flynn has a very clever writing, giving some hints about truth just to send the reader on a goose chase. I love it when writers play with my certainties. I could no longer tell up from down. And when it happened I guessed right and had not been tricked I was proud as a peacock;
–we all felt some character was a villain in disguise and we were right!;

-we were all team Grizz and despised Grunt;

–we’re all convinced Beth Flynn is a master writer. I think she has a unique style, the perfect blend between suspense, romance, fiction and non-fiction at the same time.

Now, I’d like to delve further in the “Tommy/Grunt topic”.

In book two and for a long time in this sequel I despised him greatly. I saw him as deceitful and manipulative. Of course Grizz is also a master manipulator, he is no saint either but he never hid this side of his personality to Kit. Grunt acted in the shadows and never revealed his game except when he had no other option as Kit realized she’d been played in book two. So, I did not like Grunt and was dead set on keeping my (bad) opinion. But… Mrs Flynn made me understand him better, made him behave in such a way it was really hard not to forgive him in some way.

In her ”Note To My Readers”, Mrs Flynn says (shortened version as I don’t want to give any spoiler):

“I had originally written this character as a manipulative and conniving teenager who grew into an even more manipulative and conniving adult. However, when I decided to go back and tell “young” Grunt’s story in Out of Time, I couldn’t go through with my original version and had to delete almost half my manuscript to rewrite him. I couldn’t help myself. Little Grunt stole my heart. His horrible childhood could have certainly justified some of his actions, but I decided against it. I wanted a character who rose about the dysfunction and abuse he’d suffered. Tommy outgrew his teenage ways and became a loving and caring father and husband.”

It shows us that fictional characters become real characters in some way and can alter the course of a book, take a writer through another path, make him opt for other choices. I can honestly say Mrs Flynn has managed to change my opinion on Grunt. I’m still team Grizz but I’m no longer as virulent towards Tommy. From a black true conniving villain he’s moved to a boy whose past can really be seen as mitigating circumstances for his actions, willing to redeem himself as a father and a husband.

This book has been everything I expected and even more and I’m once more amazed by this author’s talent and excellent writing. I can’t wait to read the promised spinoffs!