Reeling from her loss, Kacey Dawson is grieving and heartbroken, her addictive demons hauling her back into the alcohol-soaked abyss she worked so hard to crawl out of. Kacey teeters on the edge of oblivion, and must fight her way through the pain, to build a new life for herself with her music, and somehow fulfill the promise she made to Jonah…one she feels is impossible to keep.

Theo Fletcher has a secret burning in his heart, one that he holds close, while he struggles to keep strong for his family that is falling apart. His mother’s health is fragile and his father’s disapproval is breaking him down. Theo is afraid if he follows his heart, he’ll fail, and not just himself, but his brother who believed in him when no one else did.

Drawn together by their pain, Theo and Kacey slowly build a friendship, re-forge old ties, help each other to heal, and give one another the courage to reach for their dreams. Together, from the depths of grief and guilt, they learn to laugh again, to trust again, and quite possibly find something beautiful and lasting amid the shattered pieces of their broken hearts.

A copy of this book has been kindly provided by the author via NetGalley.com, in exchange for an honest review. 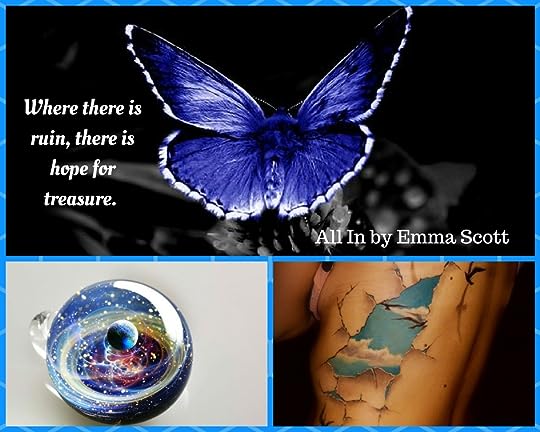 There is so much grief, so many emotions in this book! And such impossibly beautiful characters. My heart ached for the burden they had to shoulder, the loss they had to come to term with. In a few words: it was hauntingly beautiful.

The book picks up right after the end of Full Tilt. Jonah is dead and he was the glue to his family and friends. In his absence they are falling apart. Kacey could not stand living in Vegas with the constant reminder of what she had lost and she fled, drowning her sorrow in alcohol. She’s racing to her own slow death. Adrift. So fragile once again.
Jonah’s father buries himself in work while Jonah’s mother is lost. She sometimes can’t face the world, does not dare leave her house. She calls Theo all the time, just to ask for help. And Theo…Theo is everyone’s rock. He has to forget his own grief, just go on and be there for the others even if some don’t recognize his steady and unwavering support.
Jonah made him promise to protect Kacey and he failed his brother. When he learns her hiding place, he does not hesitate a single second to come to her rescue. Because that’s what Theo is: a savior. He is the guy you want always by your side because you know when the sea is rough he’ll hold steady and strong. He’ll never let you drown.

I loved how Emma Scott portrayed the main characters and their evolutions.
Kacey was fragile, lost without Jonah. She wanted to keep the promise she made but she did not know how.

”My hope is someday the promise will stop feeling impossible to keep. But whether or not at least I made him happy at the end. That’s all that matters.”

She was also incredibly courageous and finally decided to face her problems head first, thanks to Theo and her neighbor’s help. She wears her heart on her sleeve and was hurt time and time again. She wanted her parent’s love and every rebuff made my heart bleed for her. If I could I would have jumped into my Kindle just to slap her father! She is luminous, fragile, courageous, flawed, wanting to be loved.

I loved Jonah, he was such a selfless and talented guy but Theo broke my heart. He’s always been in Jonah’s shadow but never jealous. He was a rock, shouldering everyone’s burden, putting up walls to protect him. Outwardly gruff inside he had a gentle soul. He had to be strong but when would he grieve? It was so heavy. I wanted to take him in my arms and tell him: “It’s ok, you can break, I’ve got you.”
He had feelings for Kacey for a very long time and made a promise to his brother. But he is torn. Kacey is Jonah’s. What will his parents and friends think? She’s not ready. Maybe she would be with him just to honor her promise? What is he doing? What is he thinking?

I raged many times when reading all the obstacles put in Theo and Kacey’s way. I wanted to shout to the universe that this fantastic guy had a right to be happy! Let him be happy for God’s sake! Support his project, he is talented and has a right to be recognized as an incredible artist!

It was a wonderful and sad journey to take alongside these characters. Emma Scott perfectly rendered the vastly different and personal ways to cope with grief. The path to recovery. The slow healing of the souls. Because when you lose a loved one you have to live again, sometime. There is hope, light and even love at the end of the day.

It’s once more been a very emotional rollercoaster. I was overcome with grief and fear for Kacey just to hope she could find happiness with Theo and be crushed later when fate struck again. I’ve been torn apart just to be remade again. And I don’t have a single tissue anymore.

Thank you Mrs Scott, it’s been a story dear to my heart!