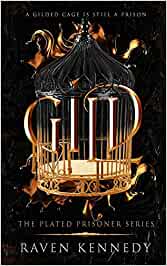 The fae abandoned this world to us. And the ones with power rule.

Gold floors, gold walls, gold furniture, gold clothes. In Highbell, in the castle built into the frozen mountains, everything is made of gold.

King Midas rescued me. Dug me out of the slums and placed me on a pedestal. I’m called his precious. His favored. I’m the woman he Gold-Touched to show everyone that I belong to him. To show how powerful he is. He gave me protection, and I gave him my heart. And even though I don’t leave the confines of the palace, I’m safe.

Until war comes to the kingdom and a deal is struck.

Suddenly, my trust is broken. My love is challenged. And I realize that everything I thought I knew about Midas might be wrong.

Because these bars I’m kept in, no matter how gilded, are still just a cage. But the monsters on the other side might make me wish I’d never left.

The myth of King Midas reimagined. This compelling adult fantasy series is as addictive as it is unexpected. With romance, intrigue, and danger, the gilded world of Orea will grip you from the very first page.

Please Note: This book contains explicit content and darker elements, including mature language, violence, and non-consensual sex. It is not intended for anyone under 18 years of age. This is book one in a series. 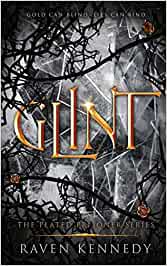 “You want to make your life easier? Then be the caged bird that you are and sing.”

For ten years, I’ve lived in a gilded cage inside King Midas’s golden castle. But one night changed everything.

Now I’m here, a prisoner of Fourth Kingdom’s army, and I’m not sure if I’m going to make it out of this in one piece. They’re marching to battle, and I’m the bargaining chip that will either douse the fire or spark a war.

At the heart of my fear, my worry, there’s him—Commander Rip.

Known for his brutality on the battlefield, his viciousness is unsurpassed. But I know the truth about what he is.

The betrayers. The murderers. The ones who nearly destroyed Orea, wiping out Seventh Kingdom in the process. Rip has power sizzling beneath this skin and glinting spikes down his spine. But his eyes—his eyes are the most compelling of all.

When he turns those black eyes on me, I feel captive for an entirely different reason.

I may be out of my cage, but I’m not free, not even close. In the game of kings and armies, I’m the gilded pawn. The question is, can I out maneuver them?

This is the captivating second book of The Plated Prisoner series. It’s an adult epic fantasy story blending romance, intrigue, and beautiful imagery. Return to the seductive story of magic inspired by the myth of King Midas, and get caught up in the world of Orea.

Please note: There is explicit language and romance in this book, not suitable for those under the age of 18. 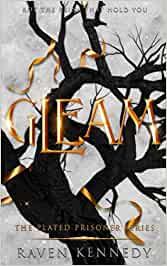 King Midas made me the woman I am today. Notorious. Unattainable. His.

The thing about being confined is that you believe it’s to keep the bad out… Until you realize it’s about keeping you in.

I’m now in a strange kingdom surrounded by liars, with no allies of my own, but I won’t sit idly by and let myself wither. No, there’s something that’s bloomed from the pit of my repression. Something dark. Something angry.

But the last thing I expected was for my anger to call out to him. King Ravinger.

He’s sinister and powerful and entirely too seductive. I’ve learned my lesson with trusting manipulative kings, so why does my chest constrict every time he’s near? I need to tread carefully, or I’m at risk of losing much more than just my freedom.

Regret and revenge war inside of me, and I need to figure out a plan fast before I get tangled up in the schemes of kings and queens.

Because I won’t be caught in a cage again. No, this time, It’ll be me setting the trap… I just hope my heart comes out of this unscathed.

Review for the three books

I give five stars to a series I nearly DNF in the very first pages!

First be aware that series is full of triggers!

I was SHOCKED. And disgusted.

These women trying to please the king was an act. They were forced to partake in his debauchery if they wanted to eat, to be protected, to enjoy some luxury.

And that was not equal footing but power play.

Having Auren, the golden favorite, forced to watch it behind bars while she obviously had feelings for the king was even more disgusting.

I don’t consider this spoiler as it happens literally in the first ten pages of the book by the way!

I stopped reading altogether and rushed to chat with a friend who had finished reading that series. When I told her I would DNF she told me to keep reading, that it got better.

In one week, I had binge read all three published books and now I need the last one!!!

I don’t know how to explain that series as there are many arcs.

The most important one is probably the “coming of age” trope.

Because even if Auren is twenty-five, she will have an incredible character growth in this series!

Auren lives in a huge cage in Midas, the King of Sixth Kingdom, palace.

She has known Midas for ten years and she relishes being behind bars as life had been cruel to her. Due to her appearance, she has been used, abused, exploited since she was a child stolen from her parents. She clearly suffers from PTSD and that cage is her safe haven.

Soon she’ll feel stifled. Imprisoned. She’ll want more. And she will go a long way to get some freedom, learning to become stronger. Learning her own worth.

That growth won’t certainly been made easy by Midas!

Here comes the second arc: the bullying and manipulating of people.

Hated how his silver tongue manipulated Auren. How he made her feel guilty, afraid, meek. Grrrrr I wanted to kick his behind so many times!

Plus, him using “saddles” was so degrading for these women. I confess that the use of the word “saddle” was an amazing idea to have me boiling with revolt!

Midas is not the villain you love. He was the worst kind of villain!

Of course, you’ll have ordeals that will help Auren to grow stronger.

But let me tell you that what was done by Midas in Gleam had me rage and so anxious that I skimmed some parts! I just was too keyed up. I couldn’t read! I was so so afraid for Auren. And enraged! And…

I bet that if you had taken my blood pressure at that time it would have been through the roof.

Even if you have lots shocking sex scenes, many moments where Auren was meek, timid and I wanted to shake her (not too violently mind you) to put some sense into her skull, I got it.

I got why Auren, so traumatized, deprived of touch since her childhood craved Midas’s approval and the crumbs of affection he deigned give her.

Yet I was so relieved and enthusiastic when a true love interest seemed to make a grand entrance in that story!

And what love interest! Imposing, formidable, sexy and so powerful!

OK I am stopping here. I know that I am not making a lot of sense but that’s because I don’t want to give spoilers away!

Just give me the fourth book already!