The battle lines have been drawn and Mari, an Earth Walker and Nik, a Companion, who were once from rival clans now find themselves fighting to save each other and their people from destruction.

Thaddeus betrayed his own people, killing Nik’s father and destroying their entire clan. But he wants more. He wants the power he believes Mari has stolen from him and his people and he will do anything he must to get them back, even if it means destroying everything in his path. There is only way to stop Thaddeus, but it means a harrowing journey for Mari and Nik into the heart of darkness. But if they hope to survive the coming fight, they have no choice but to believe in each other. 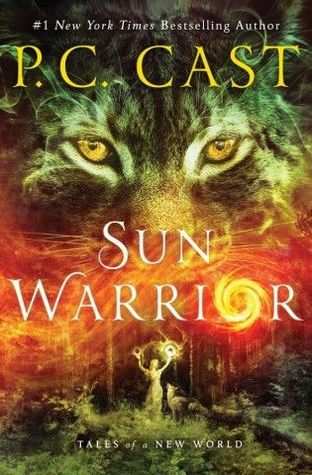 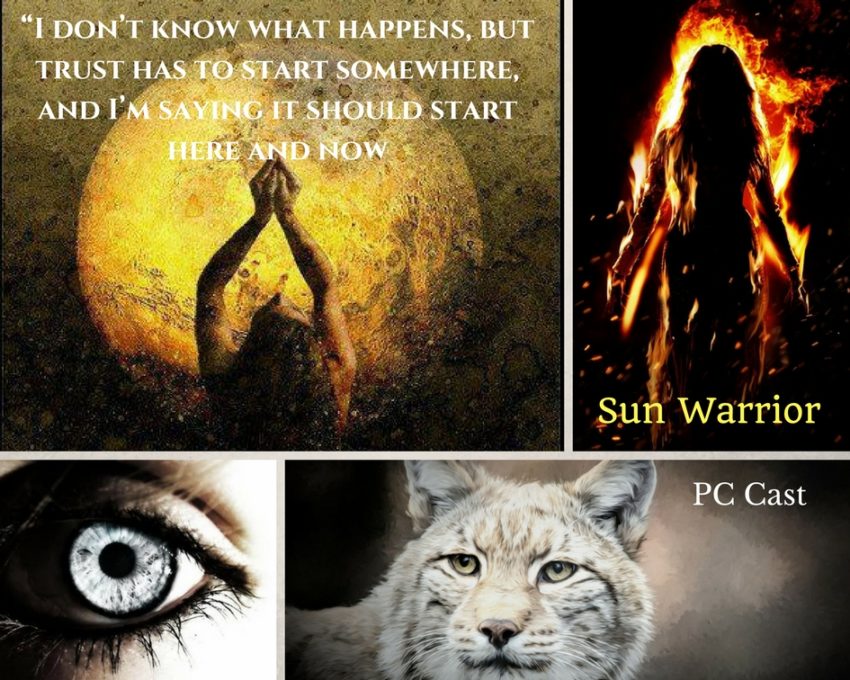 Let’s establish something right away: PC Cast knows her job and its intricacies extremely well.
She’s once more made me live an extraordinary adventure right alongside Mari, Nick and a collection of fascinating side characters. Some of them truly deserve their own books!

What’s even more surprising she made me like Sora! In Moon Chosen I could not stand that superficial brat. I found her vain and egotistical. Then by the end of the book my opinion changed as the girl showed her insecurities. With Sun Warrior I’m now a huge fan of Sora. I like her sarcasm I like mischievous Sora. I like her down to earth and take no crap attitude.

She is less “perfect” than Mari and that’s why she feels more “real”.

Now back to the story and what captivated my attention all along.

We begin right after Mary and Nick’s escape from The Farm.

Nick’s father died at the hands of Thaddeus and Laru chose to follow Nick instead of dying.

In short: we begin right in the middle of an action scene.

Everything is burning around our heroes and Nick will try to save The Tribe of the Trees while Mari will lead some escaped Earth Walker women and Companions back to safety in Earth Walker territory.  Of course she won’t be able to stay away from Nick and will go back to help him.

This part is packed with action, dangers, betrayals and new encounters. It’s only the beginning!

It really sets the tone of the story as on one hand you will have the “old” Tribe of the Trees now led by a vengeful and crazy Thaddeus (I fiercely hate Thaddeus! even more than Dead Eye). On the other hand it’s a new beginning for Mari, Nick and an assorted melee of Earth Walkers, Companions and even a Lynx man.

I loved that PC Cast built a story opposing distrust and hate to acceptance and love.

“I don’t know what happens, but trust has to start somewhere, and I’m saying it should start here and now,”

Accept the other in his/her difference, build a new world more open and filled with trust this is the core message of the second instalment.

That’s Mari and Nick’s dream. They want to build a new future around a new Pack.

“The Clan was broken when my mother died. I agree with Davis. I want more than to just rebuild a Clan that I had to hide my true self from. I want a Clan where we can be ourselves, in our best and truest forms.”

If PC Cast series happen in a dystopian world it’s undertone is very contemporary even historical.

What happens to The Tribe of the Trees and to the people of the city reminded me of what happened after the First World War with Hitler seizing the power and manipulating ordinary citizens to follow him in his madness. It’s when a people is at its lowest, decimated by a natural or economic disaster that ordinary people are the easiest to manipulate. The hate Thaddeus carried could take roots in the Tribe.

Prepare to be surprised in this sequel because:

-You will experience extreme emotions for the characters. Be it hate and disgust towards Taddheus and “Dead Eye”, pity for Dove, admiration for Mari and Sora… You may be subject to abrupt mood changes.

–Know that some scenes are nearly Game of Throne worthy. I had a really hard time to read some scenes with the dog (I’m a dog lover and dog owner so it was really, really painful to read). The Skin Stealer cure is also quite disgusting and its aftermaths heart breaking for some creatures. What “Dead Eye” inflicted to some was horrible and Thaddeus does not fare better. It’s sale season Ladies and Gents we get two villains for the price of one😉

–The new side characters are just awesome! Davis revealed unexpected side of his personality, it was fun to witness the “how to seduce Earth Walker women 101” lesson Sora gave to Antreas and I would say the animals are “character worthy” especially with a proud Bast and playful Rigel. Not to forget the “ever happy” Cammy. PC Cast did an excellent job portraying the canine companions, their play and attitudes. If you own a dog I dare you not to laugh out loud some time or sport a goofy grin while reading some scenes.

-As already said you will change your mind about some characters. I named Sora but I think my mood and opinion about Dove is changing too.

-PC Cast has of course some tricks and plot twists keep everything interesting moving the story to a new unexpected path. The world of The Clans, the Tribes and the others is changing forever.

-First Nick is very supportive of Mari and they obviously love each other but I wanted even more of their romance. It takes a backseat to the story but I can understand it was hard to avoid making this choice when you have so much characters, twists and turns.

-Second complaint: I had not my fill of Nick. I mean he was present and had some action scenes and all but the first book centered around two main destinies: Nick and what happened to him in the Tribe etc. and Mari. In this second book he is somewhat eclipsed by Mari, Thaddeus and Dead Eye’s stories.

So this is a letter to PC Cast: could you please give Nick a more prominent role in the third book? Pretty please with a cherry on top?

Recommend it? Hell yes! But only after you’ve read the first book.