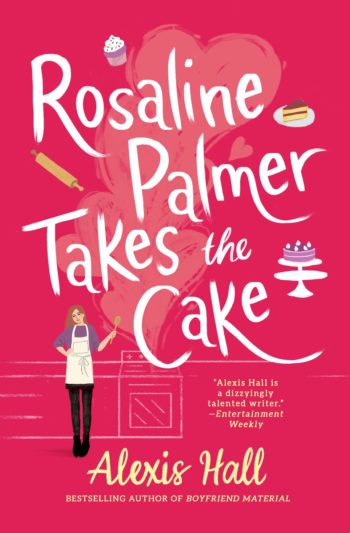 Following the recipe is the key to a successful bake. Rosaline Palmer has always lived by those rules—well, except for when she dropped out of college to raise her daughter, Amelie. Now, with a paycheck as useful as greaseproof paper and a house crumbling faster than biscuits in tea, she’s teetering on the edge of financial disaster. But where there’s a whisk there’s a way . . . and Rosaline has just landed a spot on the nation’s most beloved baking show.Winning the prize money would give her daughter the life she deserves—and Rosaline is determined to stick to the instructions. However, more than collapsing trifles stand between Rosaline and sweet, sweet victory.  Suave, well-educated, and parent-approved Alain Pope knows all the right moves to sweep her off her feet, but it’s shy electrician Harry Dobson who makes Rosaline question her long-held beliefs—about herself, her family, and her desires.

Rosaline fears falling for Harry is a guaranteed recipe for disaster. Yet as the competition—and the ovens—heat up, Rosaline starts to realize the most delicious bakes come from the heart.

Before writing this review, I went to copy the synopsis from Goodreads and…I was so surprised there were many 3 to 2 stars reviews. As I don’t want to get influenced while writing a review, I’ll go look after the reasons…right after I post this 😀

First, I adored Boyfriend Material that was my first Alexis Hall and I dove head first into the audiobook of Rosie Palmer.

I really liked the narrator even though it took some time to get used to her very english and sometimes posh, sometimes more “rustic” accent. But I think she did a great job impersonating the different characters.

Second: I am a huge fan of The Great British Bake Off and I had to laugh when the narrator did the voice of Grace as it reminded me of the show!

Rosaline Palmer is a single mom, bisexual, coming from a very posh family of doctors (they have a house in Kensington!) and she is just fed up with depending of her parent’s charity to be able to make ends meet some months.

As she loves baking, she has decided to enter the national baking TV show in the hope of earning some money and publishing a book on baking.

When going on site for the first time, her train will leave her stranded into nowheresvillage with another contestant: Alain.

What will follow is eight weeks of competition with her falling for a guy, struggling as every single mom to take care of her daughter in the best way and a personal growth where Rosaline is concerned where she’ll end up living her life and not the one others dream for her!

What I really liked is the whole array of characters that we get here!

They may  seem and probably are caricatures but that worked so well with me.

From the b*tchy producer to the granny reading smut going through the bubbly student to the quiet, shy and manly electrician… well you have every type of people and I think that really brought the story to life!

Each character added a layer to the story.

Also the romance was nicely done with of course a twist that I won’t reveal here but that I saw coming  miles away.

Last but not least Rosaline is a great character, so relatable!

Raising a child alone is no picnic but she did a splendid job and her eight years old daughter was smart, sassy and just adorable! I laughed so many times at their dialogs, especially when she candidly suggested that maybe an alien lived in their boiler!

At the beginning of the story, Rosaline doubted herself and her worth. Her parents always looked down on her, considering she could have done so much better, gone back to university to study medicine. And she didn’t know if she had what it took to win the competition either. She let others push her in the direction they thought was best for her.

But challenging yourself and succeeding in what you set up yourself to is a true confidence booster.

Certainly if some other candidate encourage you and validate your choices.

This audiobook was sassy, fun, insightful, sometimes moving, with a delightful bunch of main and side characters and all in all a success for me!