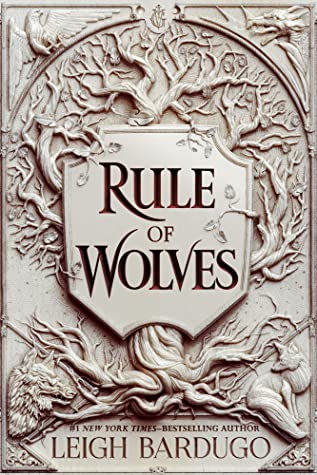 The Grishaverse will be coming to Netflix soon with Shadow and Bone, an original series!The wolves are circling and a young king will face his greatest challenge in the explosive finale of the instant #1 New York Times-bestselling King of Scars Duology.

The Demon King. As Fjerda’s massive army prepares to invade, Nikolai Lantsov will summon every bit of his ingenuity and charm—and even the monster within—to win this fight. But a dark threat looms that cannot be defeated by a young king’s gift for the impossible.

The Stormwitch. Zoya Nazyalensky has lost too much to war. She saw her mentor die and her worst enemy resurrected, and she refuses to bury another friend. Now duty demands she embrace her powers to become the weapon her country needs. No matter the cost.

The Queen of Mourning. Deep undercover, Nina Zenik risks discovery and death as she wages war on Fjerda from inside its capital. But her desire for revenge may cost her country its chance at freedom and Nina the chance to heal her grieving heart.

King. General. Spy. Together they must find a way to forge a future in the darkness. Or watch a nation fall.

WARNING : possible spoilers if you haven’t read King of Scars yet! I will mark the spoilery parts.

SECOND WARNING: sorry for the long review ahead but I got carried away once I began…

Deciding on a rating for that book has been trickier than I expected.

I came to realize that in nearly every book of Leigh Bardugo, I feel lost in the beginning, even if I had read the prequel King of Scar.

This is due to the multiple point of views she is using added to a lack of context. You don’t have an introduction to your character or a reminder of past plot or explanation of current world (when you are at the beginning of a new series). No you are jus dropped into the heart of the action or the character’s thoughts, with a lot happening and a lot of info dump. And then you wing it.

Slowly, you’ll become familiar with the characters and the world and then, once that happens, you’ll be hooked and won’t want to stop.

Following all these separate paths make you wonder what the author’s goal is but she’ll have them converge and cross, ending her story in a flourish and, usually, with some drama and open ending for future action.

That makes the beginning of the story a 3 stars and I didn’t feel invested before a long time.

Once I was in though, I became immersed in Zoya, Nikolai, Nina and occasionally “the monk” and other character’s POV.

{Possible spoiler for King of Scars!

If you have read King of Scars, you know that Nikolai has tried to get rid off his demon but didn’t succeed. And Zoya ended up becoming very powerful with a dragon inside her.

Well the demon and the dragons will play key roles in this story at one point or the other.

Nina too will play an important role in this story, all trying to prevent a war from happening and saving Ravka. I confess that I was not happy in King of Scars about her possible new love interest.

Selfishly, I wanted her to remain faithful to Matthias, even in death.

I think that I was even more unsettled as she was falling for a woman whereas she never had shone any indication that she could love women in such way before. And yes, I am all for you love a person, not a gender. I was not proud of my feelings but I couldn’t help them.

Now, I can say that I am at peace with how Leigh chose to handle that love trope.

I can’t say that I am truly happy, because what would have made me truly happy was a miracle and Matthias resurrection but I am …content.

End of spoiler for King of Scars}

Some words about the characters

Zoya was a formidable character and she hides a heart of gold behind a cold façade. Because she fears love. Love means loss in her own world. And her own mother had betrayed her too. I loved learning about Zoya’s past too as I had no idea (or didn’t recall from the past stories). She will make peace with her past, won’t fear her heritage any longer and will finally welcome love instead or pushing it away. She truly had a growth of character in that instalment. And damn is that woman badass! I’d want her to have my back any day!

And of course, Nikolai remains one of my favorite book boyfriends! Not only dashing but with a brilliant and scheming mind! All sarcasm and self-deprecation too!

” Is it the shadow inside you that makes you brave? ”
” I should hope not. I was making bad decisions long before that thing showed up. ”

And another quote, just because I can (end love the banter so much 😊 )

“This is a bad idea,” moped Adrik.
“I have a surplus of bad ideas,” said Nikolai. “I have to spend them somewhere.”

Nikolai is absolutely selfless and courageous. All that he has ever wanted was to protect Ravka. To protect his people. All his people. Even at the cost of abandoning his dreams of being a privateer and taking the sea.

I also think that Nikolai with his cool composure and being unruffled even in dire situation would have been British if he wasn’t Ravkan! 😊

“The world might crumble, but Nikolai Lantsov would be holding up the ceiling with one hand and plucking a speck of dirt from his lapel with the other when it all went to ruin”

Nina is still one of my favorites here, still impulsive, brash, courageous.

She is a real chameleon and adapts to her new environment. She is like a cat, always falling back on her feet even in dangerous situations, when she is caught red handed, she can bounce back and manage a plausible explanation and seduce anyone in believing her!

Even if she was a soldier first, she’ll play the role of spy with maestria.

That being said, even with her playing a major role, I found her washed out somehow in Rule of Wolves. I didn’t feel her usual intensity. I know she is grieving and trying to live again but in King of Scars, her grief gave her a dramatic depth that I lost here, without getting the old “happy go lucky and banter” Nina back.

I don’t know if others experienced the same feelings? It’s like she became a secondary character instead of a main one, despite the prominent role she played in the story.

Now, about the plot, the twists etc..

I in fact loved all the action happening once more!

You have a war in preparation and we lost some beloved characters. That made me cry because yes, I cry when reading books.

I think what I admired most were all the surprise and plot twists Leigh gave us!

Most I never saw coming and that makes me realize once more that Leigh Bardugo has a scheming mind!

I absolutely adored the Crows cameo here and the ending that paves a way for more Kaz Brekker’s action!

Leigh Bardugo did Kaz ‘s justice and he remained true to himself here.

And I was also so happy to read about Jesper and Wylan and see the banter was back!

“I’m not supposed to let you in,” Jesper said. Brekker seemed unperturbed. “Why not?” “Because every time I do, you ask me to break the law.” A voice from behind Jesper said, “The problem isn’t that he asks, it’s that you always say yes.”

I also liked that Leigh added a transgender theme to her story even if I know that some will probably say that she did it “just for the sake of it” or did it “badly” because these days, if you don’t have diversity in your book you are criticized and if you do but are not from said minority, you still are rumored doing it wrong…

On a side note, being an author is a frightening thing these last days with all that’s happening on social media.

What rubbed me wrong though what was happened to the Darkling. And I was ready to give only four stars because…I think all along, all that he has ever wanted was to save Ravka and protect Grishas. And yes, along the way, he did terrible and horrible things. But still, I was not totally sold to what happened here.

Until in the very last pages Leigh Bardugo turned the tables once more and now, I have something that I can look forward to and that aligns to what I’d want for him and for the plot.

As you can see, I have many things to say and some conflicted feelings. Yet it remains that that book surprised me, kept me on my toes and that I can’t wait for the next one, logically in the Six of Crows series!

Special mention once again to Lauren Fortgang, one of my favorite narrators.