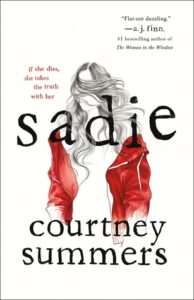 Sadie hasn’t had an easy life. Growing up on her own, she’s been raising her sister Mattie in an isolated small town, trying her best to provide a normal life and keep their heads above water.

But when Mattie is found dead, Sadie’s entire world crumbles. After a somewhat botched police investigation, Sadie is determined to bring her sister’s killer to justice and hits the road following a few meagre clues to find him.

When West McCray—a radio personality working on a segment about small, forgotten towns in America—overhears Sadie’s story at a local gas station, he becomes obsessed with finding the missing girl. He starts his own podcast as he tracks Sadie’s journey, trying to figure out what happened, hoping to find her before it’s too late.

Sadie is the kind of story that you will remember years after because it is uncompromising, bleak, harsh yet feels so true.

I never intended to read Sadie. This is just one of these hyped books that kept popping on my feed and the reviews were so enthusiastic that my interest was picked.

Yet it will be very complicated to write this review because as much as I loved reading the book it never “pulled me under” as in in “made me have lots of overwhelming feelings”. And the feels is what fuels me when I write reviews!

Now don’t misunderstand me I really had a great time reading this tragic story but the narrative choice made impossible for me to be “caught by the throat – drowning in unbearable feelings – suffocating under the character’s emotions”.

And that was probably for the best given Sadie’s story!

On the one hand we follow West McCray presenter of a radio podcast. He’s been contacted by May Beth Foster to look into Sadie’s disappearing. He will document his search to podcast this story and will speak throughout the book about “The Girls”. We have several episodes, each episode making for one chapter. The tone used is one you can find in TV shows where a journalist helps find a missing person by following some leads and reading clues. It gives a very factual tone to terrible events.

On the other hands the other chapters are written through Sadie’s eyes. Sadie is on a mission: find her sister’s murderer. She too will track some old trail and go from town to town, meeting people who may have known “him” and help her find his retreat. Yet I did not feel overwhelmed as Sadie herself acted like in a daze. I experienced her trip as if she was detached from her body. Maybe she was exhausted and she lived all this like a dream or rather a nightmare. Maybe her not having a reason to live any longer she felt numb. Maybe ….  Sadie has lived through so many traumatic events that she coped by pushing every horror she’s been through at the back of her mind. She knew it had happened to her yet refused to linger, examine and digest preferring to focus on getting revenge.

These writing techniques made reading about horrifying, tragic past and current events bearable. It was like looking through a protective screen.

I realized everything that happened to her and her sister had been horrible, painful, unbearable but could keep a protective shell around my emotions. Based on the synopsis and what I told you above you know that the plot is about finding the killer.

But what the synopsis does not say is that this book could be real. Girls disappear every day.

Girls are murdered every day. It could happen to any girl but some are real targets as they don’t have money or caring parents or ….

This story is about the depravity of some men. How they can smell lonely women to manipulate and have them at their mercy.

It features the very sad fate of kids from parents addicted to drugs or alcohol. There is violence in neglect, in lack of care. What happened to Mattie was tragic but all Sadie’s life was painful. Because Sadie just wanted to be heard. And to be loved.

“I realized pretty early on the who didn’t really matter so much. That anybody who listens to me, I end up loving them a little.”

It also shows that we can endure many hits from life for a long time but then something can make our world crumble. Sadie endured her harsh life because she hade someone to care for. Someone who depended on her. Her little sister Mattie became her sun, her reason to live this ugly and unforgiving life. Sadie’s love for her sister was all encompassing. It was the love of a mother for her child. She would have done and did anything to protect Mattie. Even at the cost of her own integrity. No sacrifice was too great.

When Mattie was murdered Sadie had nothing to live for anymore but revenge.

Sadie was a very courageous and tragic heroine. One that never had luck in her life.

She was tired. So tired. But she had a mission to accomplish. We will follow this brave and broken girl till the end of the story, wondering if this can have a happy ending or not.

Have you read it or do you want to now?