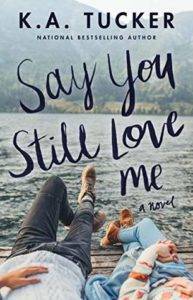 Life is a mixed bag for Piper Calloway.On the one hand, she’s a twenty-nine-year-old VP at her dad’s multibillion-dollar real estate development firm, and living the high single life with her two best friends in a swanky downtown penthouse. On the other hand, she’s considered a pair of sexy legs in a male-dominated world and constantly has to prove her worth. Plus, she’s stuck seeing her narcissistic ex-fiancé—a fellow VP—on the other side of her glass office wall every day.

Things get exponentially more complicated for Piper when she runs into Kyle Miller—the handsome new security guard at Calloway Group Industries, and coincidentally the first love of her life.

The guy she hasn’t seen or heard from since they were summer camp counsellors together. The guy from the wrong side of the tracks. The guy who apparently doesn’t even remember her name.

Piper may be a high-powered businesswoman now, but she soon realizes that her schoolgirl crush is not only alive but stronger than ever, and crippling her concentration. What’s more, despite Kyle’s distant attitude, she’s convinced their reunion isn’t at all coincidental, and that his feelings for her still run deep. And she’s determined to make him admit to them, no matter the consequences.

This book is a perfect balance between cute yet real, past and present, nostalgic yet hopeful.

Kyle is: boyish, handsome, loyal, afraid to be associated with his family’s mistakes, respectful, a good man. Humble yet self-confident.

He respects Piper and can’t believe how lucky he is. He will never pressure her yet once they’ll “do it” he will take care of her. Even as a teenager he was a catch LOL 😀

Daring, he can’t resist a challenge. At camp Wawa he was a people’s boy.

Piper is: rich but values people by their behavior and character not by their bank account. Down to earth. Generous. Simple. Caring. Smart. She is passionate about her dad’s work.

She wants he dad’s approval as they share a special bond.

Teenage Piper was also afraid of her parent’s divorce and what it will entail for her.

She could never resist Kyle’s dare!

Both are attracted to each other like hormonal magnets. It was a little bit like love at first sight. They were oozing pheromones and my head was just pinning as it was such a heady mix!

Now for the sidekicks:

Eric was a hellion. Typical goof and devil may care teenager.

Ashley was sweet, creative and kind. Always ready to follow Piper on her adventure.

Christa was bossy. A planner and organizer. The voice of reason. She also cares deeply about her friends even if her exterior rather looks like a hedgehog than a sweet kitty.

Piper’s dad was intense. Harsh but KA made him not a real villain as all that he’s done was to protect Piper. And he remains human and cares about other’s misfortune. At heart he is a good guy. An overprotective father wanting to protect his daughter. He pushes Piper very hard as he is preparing her, grooming her. He made mistakes but he owned them and somehow atoned for them. As the saying goes: The road to hell is paved with good intentions ….

2) What made me love that book?

Well of course the characters first as I am a character driven stories kind of reader.
I love that KA Tucker takes the time to flesh out her characters and give the needed nuances to make them real. They have flaws but are good at heart. Even Piper’s dad seemed harsh sometimes but we could not stay mad at him as his actions came from the need to protect his daughter but not boss her like you can sometimes see in other storie.

I thought about the construction of the story. Alternating between past and present chapters is never my favorite way to tell a story. I usually want to rush up the past chapters and just stay in the present. Or want a first part about the past and a second past about the present. Yet it did not bother me much in Say You Still Want Me.

Because the past chapters were as interesting and real as the present chapters.
Because the past featured really likeable teenagers falling in love that summer. You even get great sidekicks with the goofy best friend, artsy girl and “always walk the line” roommate.
They were needed to understand the dynamic between Piper and Kyle when they will come face to face again. They were necessary to grasp Kyle’s secrets and some things he’ll tell Piper in the “now”.

I loved all the feelings I got to experience while reading: the meet cute at the camp, the burgeoning love with its thrill and first pitter patter of the heart. The shock at seeing someone you cared for from your past. The anger when Piper had to face masochistic pigs as a vice president of her father’s company. The rush of a work well done be it because the teary little girl you had to mother left you with a parting gift at the end of her week or because you are part of a city’s transformation. I worried and wondered too not knowing if I would simply be one more notch under the alluring boy’s belt or if his come-back in my life had a deeper meaning than just taking a new job.
I cried too, at the end of the summer or learning what happened to some friend.
I also basked in a lasting friendship.

If you are looking for a smart, realistic moving NA story don’t look further!

Last but not least I want to thank Atria Book (Simon and Schuster) for sending me this copy!

Have you read it? Or are you a fan of K.A. Tucker