4 “I love the banter” stars 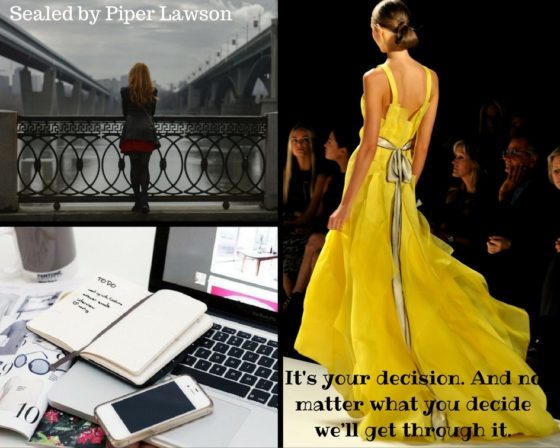 An ARC has been kindly provided by the author in exchange for an honest review.

It’s now the fourth book I’ve read by Piper Lawson and the third of her Travesty series.

For fans of the series Sealed is about Dylan and Lex trying to make their long distance relationship work. He is studying in California and she’s working her butt of in New York growing their fashion business with Ava and Jordan.

Well let me tell you being miles apart s@cks. They’re trying to follow a schedule to see each other once a month but it’s still frustrating!

Dylan is still madly in love with Lex and he wants to build his future with her. You’ll even get a very cute moment when he’ll recall what he felt for her when he was a kid. Now he’s in New York for some days to chase future employers and he’s some great plans he wants to follow in this short span of days.

Only… all will conspire against Dylan and his day will completely unravel. I read this and thought about some movie where the hero has a big plan just to see everything go to Hell as problems are piling up (think about Very Bad Trip if you want).

What worked really well for me: the humor and banter. That humor is Piper’s trademark and it gives something fresh, light and funny. Just to give you some idea: Dylan has just arrived surprising Lex and they’re kissing passionately in Ava and Jordan’s presence

“Jordan rose from the couch, brushing herself off and crossing to the door. “Where are you going?” Lex asked. “To buy a pregnancy test. Watching that might’ve made me conceive.”

I liked reading about their “After” and how Travesty was growing thanks to that wonderful girls team. Nate will also sweat some in this story as he did some blunders and he’ll have to grovel (some) to be forgiven.

If I was laughing and smiling thanks to Piper’s quick-wit I would have loved to feel overcome by emotions at some key moments in the story. Feelings were certainly presents but there just was this little thing missing to amp up the emotions and make me give it 5 stars.

Would I recommend this book? That’s a resounding yes if you like light and fresh stories without too much angst about young adults trying to make everything work!

This was one aw-shucks moments:

I’ll knock on every door in Manhattan until I get a yes. See, I’ve loved you since I was fifteen. Maybe since I was nine, which would be before you even had boobs. That’s how you know what real love is. When it’s not even about boobs.”

Tall enough I had to tilt my head back to meet his gaze, taking in more than six feet of distressed dark jeans over and an olive green Henley on the way. The clothes clung to his body, which was hard and lean in equal measure. His chocolate brown eyes were warm enough to turn my insides to mush and the way his hair fell across his face was achingly familiar. “Dylan?” “Hey, smart girl,” he murmured. I did what any twenty-three-year-old woman would do when confronted with more than six feet of unexpected and gorgeous guy. I tackled him.

Cherry on top, creme de la crop (go watch Katy Perry “If You Want me”, she’s all figured out about making men grovel and sweat): Piper Lawson is a great woman!  Go stalk her on FB, Goodreads.. and you’ll see .

Other books by Piper Lawson